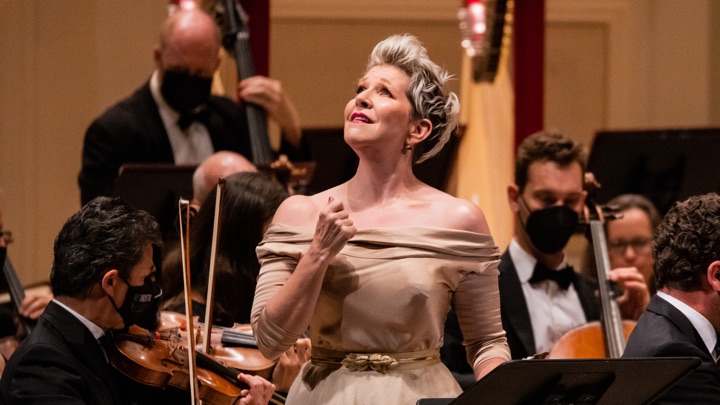 During the long months that the pandemic shuttered opera houses worldwide, many members of the MET Orchestra engaged in a rancorous campaign against the company that had furloughed them without pay. Until contentious labor negotiations were successfully concluded last summer, many outsiders wondered if there even would be a 2021-22 opera season at Lincoln Center.

But the Metropolitan Opera returned—without missing a single performance—and, to my delighted surprise, the orchestra sounded consistently reinvigorated over the 20 performances I attended, from the pre-season Verdi Requiem to The Rake’s Progress in late May.

The concerts featured two often-performed chestnuts: Richard Strauss’s Don Juan and Berlioz’s Symphonie Fantastique. Determined to showcase his band’s astonishing virtuosity, Nézet-Séguin elicited extravagantly flamboyant readings that favored bravura over nuance. A friend remarked after the Berlioz that he didn’t recall that the Symphonie (which he hadn’t heard in a while) was always quite so loud. Normally it might not be, but the conductor was emboldened to push his Rolls Royce to the limit and the drive was undeniably exciting.

But even more satisfying was a ravishing rendition of Missy Mazzoli’s beguiling 2014 Sinfonia (for Orbiting Spheres) which concluded the first half of Wednesday’s concert. The eager composer had to hurdle awkwardly over the many walkers parked by ushers at the edge of the stage to accept her ardent ovation. 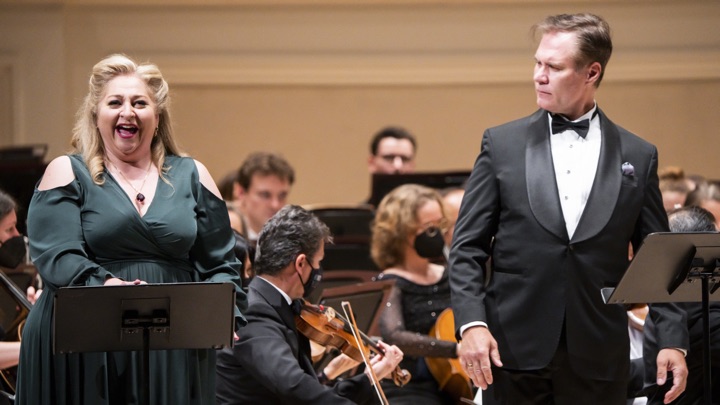 Since the Carnegie concerts began over 30 years ago, they have nearly always featured notable singers from the Met roster. Last week’s pair did as well, though with mixed results. When the incisive, eloquent orchestra was the most successful component of Wednesday’s first act of Wagner’s Die Walküre, something is definitely amiss.

Anticipating a new Met Ring conceived by Richard Jones (why him?) arriving in the 2025-26 season, Nézet-Séguin has already been getting his baton wet. He led a well-received tour of Das Rheingold with the Rotterdam Philharmonic earlier this spring.

The Carnegie Walküre first act was originally announced for June 2021; its cancellation meant that the entire Strauss/Mazzoli/Wagner program was pushed forward a year, though Günther Groissböck, the original Hunding, was replaced by Eric Owens. But perhaps no one informed the bass-baritone of the engagement until recently as he rarely looked up from his score. As nearly always these days, the ever-bland Owens produced unattractive, effortful sounds that conveyed little of Hunding’s threatening menace.

Happily, his enemy/rival was splendidly embodied by Brandon Jovanovich whose tireless Siegmund dominated the hour. The tenor, who earlier this year at the Met had found the punishingly high tessitura of Bacchus in Ariadne auf Naxos a strain, was more at home with Wagner’s more congenial writing. Though an occasional low note troubled him, his securely forthright singing brought the hero urgently to life.

Unlike some other tenors, the appealing Jovanovich resisted the temptation to hang onto Siegmund’s cries of “Wälse!” much longer than Wagner requires. Christine Goerke, however, didn’t get that bulletin as she elongated her triumphant “Siegmund!” far beyond any I’ve ever heard from a Sieglinde, either live or on recordings. At least she was entirely familiar with her music, unlike the last time I heard her—as Isolde in another Wagner single-act concert. 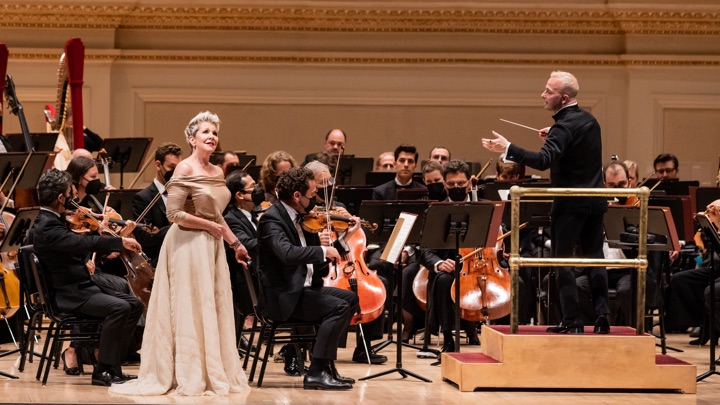 Though Isolde (originally planned for the Met in late 2020) should be an apt role for the soprano, Sieglinde proved all kinds of wrong. While Goerke’s warmly enveloping middle register suited the doomed Wälsung’s music, the soprano conveyed little of the woman’s remarkable transition from unhappy wife to ecstatic lover.

She was most successful in the gripping narration of “Der Männer Sippe.” Otherwise, Goerke’s voice displayed a disconcerting tendency to change color, sometimes during a single phrase. The lowest notes emerged gravely while plush, voluminous lines frequently grew smaller as they rose.

Her staid, matronly Frau evinced little chemistry with Jovanovich’s reserved, yet passionate twin. After attending this Walküre and the recent English Concert Serse, I’ve become convinced that concert performances of opera desperately need a director, or at least someone to oversee the dramatic presentation.

The three Walküre performers appeared to be operating on different wavelengths. Owens did virtually nothing to enact his character, while Jovanovich, a veteran of many stage performances, became Siegmund with simple gestures. Goerke, on the other hand, tried hardest-to the least effect. There was an inordinate amount of intent staring—at Jovanovich or toward the balcony as she marveled at spring entering the hut. Most baffling: Sieglinde exited to prepare the meal, then counted to ten and returned empty-handed. My friend and I glanced at each other in amused befuddlement.

The last time the Met Orchestra performed Wagner “bleeding chunks” at Carnegie Hall under soon-to-be-deposed James Levine, Goerke and Stefan Vinke represented a Ring future. Last week, there was a similar incongruity with Nézet-Séguin presiding over forces in which she and Owens seemed very much of the past. I overheard more than one audience member wonder why, for example, Lise Davidsen wasn’t his Sieglinde.

Before Thursday’s all-Berlioz concert, I had reservations to about its soloist, Joyce DiDonato, who would be performing Didon’s two solo scenes from Les Troyens. Was she really going to be up to this demanding music? Although she had recently taken on the Carthaginian queen in a new production at the Vienna Staatsoper, I still assumed it probably wasn’t her role.

I now have to admit that while I have some reservations, I was blown away by DiDonato: the Met’s most riveting Diva! performance of the season happened at Carnegie Hall, not at Lincoln Center!

In stark contrast to Goerke’s wan Sieglinde, DiDonato, radiant in a beautiful ecru gown, fully embodied the regal Didon during her opening monologue “Chers Tyriens” which admittedly sounded a bit odd without its usual choral interjections. Rather than exit, she remained onstage, thoroughly engaged, during the marvelous “Chasse royale et orage,” also shorn of its chorus.

Afterward, during the betrayed queen’s wrenching scena during which she raged against the departing Énée then ultimately resolved to kill herself, DiDonato pushed her voice to mirror those extremes—from harsh shouts to pitiful whispers. It sometimes wasn’t pretty but it was consistently enthralling, her bold gestures always summoning up the opera house even in a concert hall.

While her mezzo sounded surprisingly big in Carnegie, it could be said to lack the full color palette needed to do absolute justice to Berlioz’s inspired writing. White, straight tone occasionally intruded, while the top has receded in the last few years. Therefore, climaxes revealed serious strain and pitch suffered. And, yet despite these flaws, I wouldn’t have missed these shattering glimpses of DiDonato’s Didon.

For me at least, next season’s the MET Orchestra offerings at Carnegie Hall are a bit less promising. Nézet-Séguin will bring back the Met Chorus (which also performed magnificently throughout the season) for the first time in a long while for the Brahms Deutsches Requiem—not a favorite of mine—with Nadine Sierra and Quinn Kelsey.

The second program, which will then tour Europe along with the DiDonato/Berlioz show, will feature a mind-boggling Shakespeare mélange of excerpts from Bernstein’s West Side Story and the fourth act of Verdi’s Otello with Renée Fleming and Russell Thomas with bits of Matthew Aucoin and Tchaikovsky along the way!