Mainly in the plain

I wonder why many New Yorkers have been led to believe that the only Handel conductor in the world is Harry Bicket. 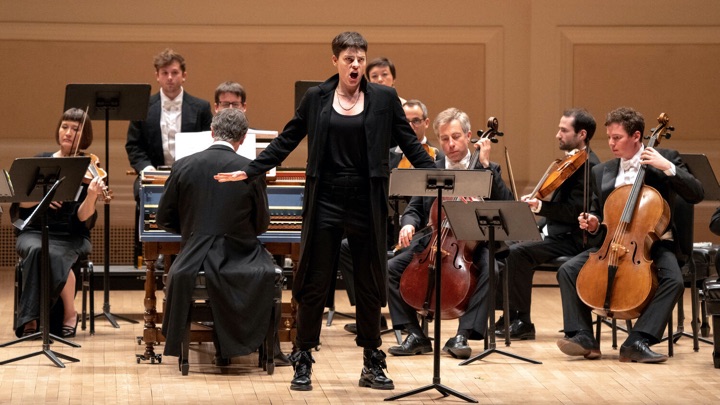 Had COVID-19 not intervened, Sunday afternoon’s Serse would have been the tenth in the annual series of Handel operas or oratorios given by the English Concert at Carnegie Hall. While both regretting the pandemic-driven cancellation of Rodelinda and Tamerlano and appreciating the fine music-making heard in the other eight, I wonder why many New Yorkers have been led to believe that the only Handel conductor in the world is Harry Bicket.

Carnegie Hall’s programmers aren’t alone: the Metropolitan Opera has given 52 performances of Rodelinda, Giulio Cesare and Agrippina since 2004 and of those 47 were led by Bicket. The English conductor is admittedly particularly adept at transforming traditional opera house orchestras into ensembles that stylishly perform 18th century works. as is regularly demonstrated at the Met, Covent Garden and the Santa Fe Opera, among others. But Handel lovers worldwide must surely be surprised at his NYC near-monopoly, especially as his Serse proved somewhat disheartening.

Composed near the end of Handel’s opera career, Serse diverges from his many previous opera seria in important ways. Its convoluted amorous intrigues are essentially comic rather than potentially tragic and the composer often strays from his usual da capo aria form. For instance, the opera’s bit hit—“Ombra mai fu” aka “Handel’s Largo from Xerxes” —is a just brief arioso, of which there are many throughout.

In the opening scene the Persian king Serse declares his intention to tell Romilda of his love (after only hearing her voice) in “Io le dirò che l’amo.” Arsamene, his brother and Romilda’s lover, then pithily answers with “Tu le dirai che l’ami,” a near identical, three-part da capo aria. Later, Romilda’s sister Atalanta concocts an intrigue to grab Arsamene for herself and warns Serse in “Dirà, che amor per me;” he doesn’t understand so she repeats the entire brief aria again with a slightly different text “Dirà, she non m’amò.”

Other equally surprising and unexpected touches dot the score which are appreciated as the plot’s love pentagon, particularly in Sunday’s performance, was challenging to follow as the three mezzos—two of whom were playing male characters, the third a female disguised as man (!)—were each dressed in black pantsuits. 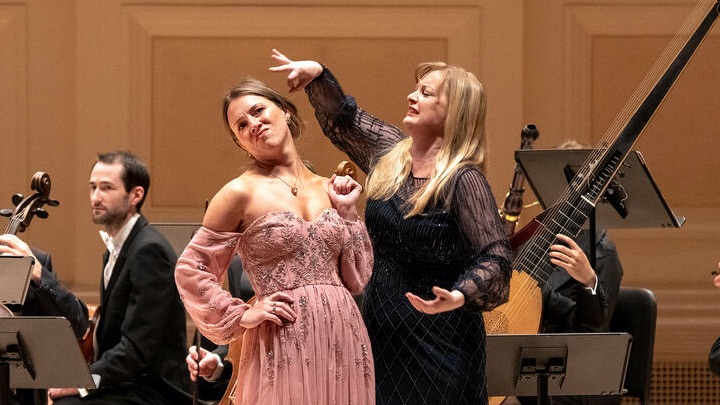 The English Concert’s Handel presentations have featured, with a few exceptions, singers from the United Kingdom and North America. Canadian Emily D’Angelo performed the flamboyant title role, but her oddly hermetic portrayal suggested that perhaps the much buzzed-about young mezzo has been tackling too much too soon.

Three engagements for next season alone—important new productions of Alcina, Ariodante and Giulio Cesare in London, Paris and Barcelona, respectively—would lead one to believe that she’s become the opera world’s new essential Handel performer. But based on Serse, I don’t hear it, at least not yet.

The opera’s title role was composed for the castrato Caffarelli who had an unusually high voice which has meant that it’s nearly always sung by a woman rather a countertenor, although in recent years Valer Sabadus and Franco Fagioli have taken it on.

D’Angelo’s unusually dark mezzo handled the writing (at the lower baroque pitch used by the English Concert) well enough but without the bravura élan one expected from the over-the-top emotions the imperious lovestruck king exhibits. Her rather plain ornaments rarely took her high, and until “Cruda furie,” the show-stopping final aria (after which she broke character to acknowledge her ovation), one even wondered if she had high notes at all.

Perhaps her glum, self-absorbed king was a conscious choice but it robbed the opera of its charismatic center. For all of Serse’s foolish, cruel actions, Handel still endows his title character with a redeemable soul which he reveals in ravishing, heart-stopping music, like “Più che penso” in the first act. D’Angelo’s chilly manner did a disservice to this sympathetic side of Serse, and her frequently rough timbre deprived bel from her canto. 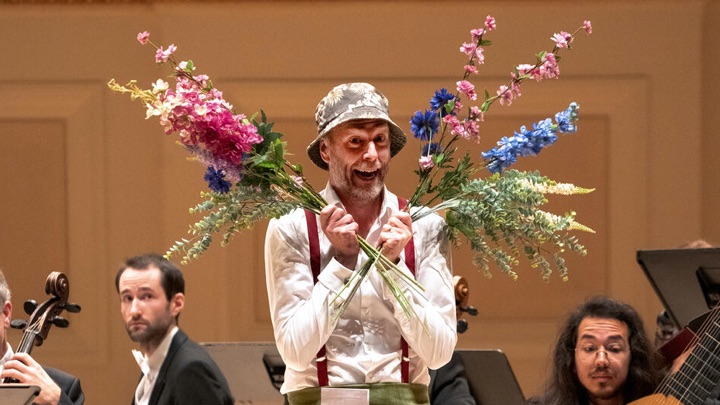 Clearly the audience is meant to root for his brother Arsamene which was made easy by Paula Murrihy’s warmly open-hearted portrayal. The contrast with D’Angelo couldn’t have been more marked, as the Irish mezzo alternated devotion and defiance with endearing flair. Unfortunately, the important interplay with her servant was undercut by William Dazeley’s broadly burlesque shenanigans. It’s too bad as the tall and lanky baritone’s Elviro was finely sung prompting one to wish he might have changed roles with Neal Davies, a usually able Handelian, whose Ariodate huffed and puffed effortfully.

The afternoon program gave no indication of a director for the the semi-staged performance which might explain all sorts of misfires. The stage setup featured four chairs (with water bottles) on each side of the orchestra, but no one ever sat down on them. The random use of scores by the singers throughout distracted: D’Angelo and Murrihy completely eschewed theirs until towards the end of the third act, while Davies, Lucy Crowe and Mary Bevan as Ariodate and his warring daughters were never without theirs with Crowe particularly score-bound.

Dazeley and Daniela Mack never touched a score which in particular complemented the latter’s strikingly potent portrayal of the abandoned Amastre, perhaps the day’s most completely satisfying characterization.

Mary, my preferred Bevan sister, shone as Dalinda in the English Concert’s 2017 Ariodante, but her piquant Atalanta was saddled with a lot of tedious comic business which marred the delicious “Un cenno leggiadretto,” the first-act closer. Her lovely soprano has darkened since the Dalinda which made for a less than ideal contrast with Crowe’s plush Romilda.

Despite appearing more connected to her score than to Arsamene, Crowe positively glowed in her grateful music though she favored ornaments that took her far higher above the staff than she should prudently go. This unwise tendency can also be heard on her recent 2-CD collection “Handel’s Queens” on which she is again paired with Bevan and well as recent broadcasts of Agrippina and Rodelinda. 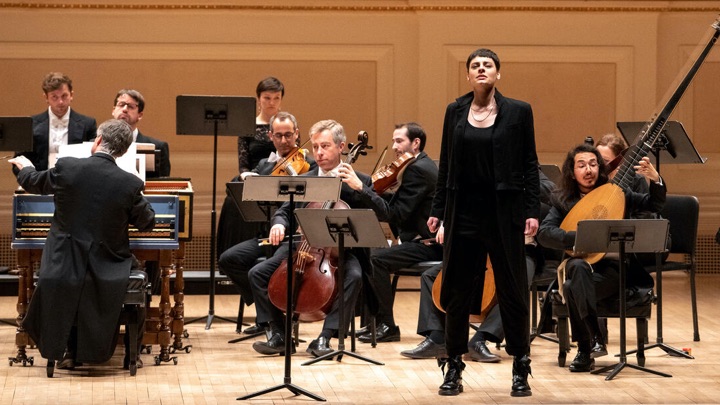 Presumably those shrieky added high notes were sanctioned by Bicket in a performance which featured some of the blandest ornamentation I’ve heard. And while bland wouldn’t be my overall characterization of this Serse, like many of Bicket’s Handel performances, it offered no special insights or revelations. It’s easy to take for granted the marvelous English Concert whose playing once again manifested a wonderful sheen and control even at the too swift tempi Bicket sometimes set.

Yet, as I have at the previous six Carnegie Handel afternoons I’ve attended, I couldn’t help wish for another, less safe and predictable approach. What might other, more probing conductors like Emmanuelle Haïm or George Petrou or Fabio Biondi or Maxim Emelyanychev or Diego Fasolis or others have made of Serse?

I’ve seen the past decades’s two essential stagings of Serse: both runs of the divine Stephen Wadsworth production at New York City Opera, one featuring Lorraine Hunt Lieberson, the other Sarah Connolly, and Nicholas Hytner’s at the English National Opera with Katarina Karnéus. If Sunday’s concert version couldn’t measure up, it reminded me what a satisfying entertainment Handel’s comedy can be.

Marc Minkowski and his superb Musiciens du Louvre are touring Europe next season with Alcina starring an inviting quartet of ladies: Magdalena Kozena, Erin Morley, Anna Bonitatibus and Elizabeth DeShong. Why not import it for a change of pace? But I’m especially eager for the next EC/Bicket Handel arriving at Carnegie in March: the splendid tripartite oratorio Solomon with the great Ann Hallenberg in what may be her first encounter with the title role.