Christine Goerke's distracted, tentative Isolde turned out to be the least potent feature of what was an otherwise exciting and effective second act of Tristan. 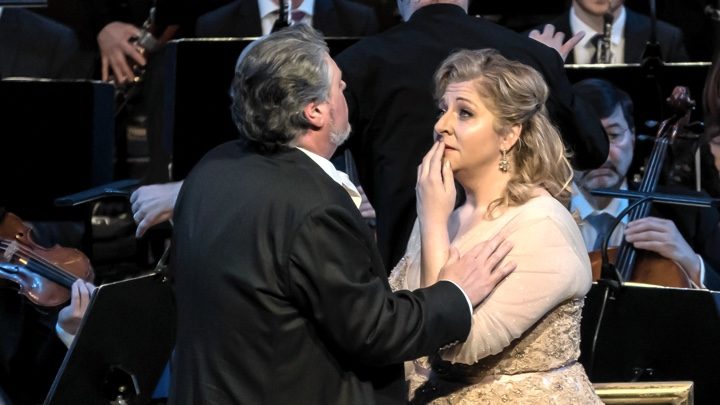 Glancing at all the advertisements and posters for Sunday’s Wagner concert at Geffen Hall by Gianandrea Noseda and the National Symphony Orchestra, savvy Wagnerites might have guessed that the first act of Tristan und Isolde was being performed as that “bleeding chunk” is all about the heroine.

The promotional materials proudly trumpeted Christine Goerke but her distracted, tentative Isolde turned out to be the least potent feature of what was an otherwise exciting and effective second act of Tristan.

Then marquee-name Jonas Kaufmann venturing his first Tristan was the draw although his partner Camilla Nylund was also making her partial role debut as Isolde. The NSO concerts were ballyhooed as being among Goerke’s initial encounters with Tristan as she had just performed this single act in August with the Concertgebouw Orchestra under Daniel Harding. But her relative inexperience was startlingly evident especially amidst her commanding veteran colleagues.

Gianandrea’s address-book must have fallen open on the G-page as in addition to Goerke, we had Gould, Groissböck and Gubanova. The latter three sang with enviable ease and commitment while the novice’s attention dwelled as much on turning the pages of her score as to interacting with the others. Unlike the Nelsons presentation at Carnegie where there was little effort to “stage” the passionate yet calamitous secret assignation and its shameful discovery, Noseda’s performers made some attempt to “interact” as well as sing.

No one but Goerke used a music stand, and her divided attention seriously impeded the drama as her actions were absolutely determined by her need to turn many, many pages. During Tristan’s solos in the extended Liebesnacht, Goerke would cross over to Gould and look deeply at him or embrace him but only until her cue approached when she’d return to her music stand on the other side of the conductor. These superficial repeated actions soon became comically predictable. 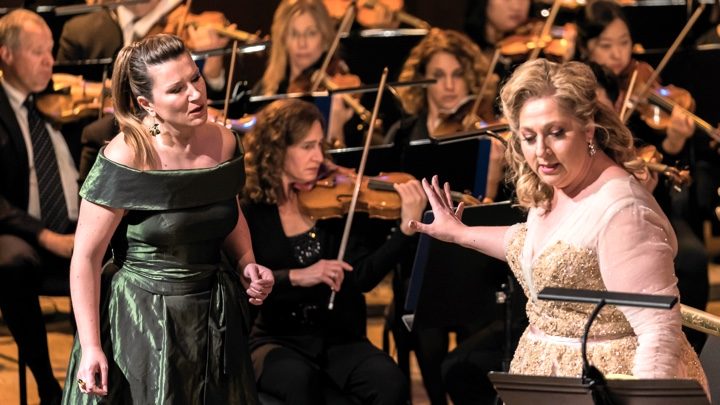 If her singing had been consistently glorious this self-absorption might have been easier to forgive but the soprano has gotten increasingly erratic over the past few years. Having first encountered Goerke in 1996 when she substituted for Teresa Stratas at the Levine Gala, I’ve been aboard for the roller-coaster ride that has been her NYC career.

The year after our initial Met encounter, her glorious Iphigénie appeared at New York City Opera followed later by a superbly over-the-top Armida in Rinaldo and I was by then an abject fan. But the problems soon surfaced—her NYCO Alcina, which should have been ideal, wasn’t and Donna Elvira in a new Met Don Giovanni flopped and she then pretty much disappeared from Lincoln Center.

After five years she returned to the Met as the Foreign Princess in Rusalka which showed promising signs of dramatic soprano transitioning but all wasn’t quite yet working. Four more seasons passed before the Färbarin in Die Frau ohne Schatten arrived that decisively changed her fortunes in the US. Since then she’s been the Elektra and Brünnhilde of choice for many American opera houses and orchestras–sometimes splendid, sometimes displaying disturbing unevenness.

My shredded quadricep prevented my attending the Met Ring earlier this year but I wasn’t crazy about a lot of what I heard of her Valkyrie over the airwaves although, my my, her act 2 Götterdämmerung was stunning. Therefore I approached Sunday’s concert with apprehension hoping that the somewhat lower tessitura of Isolde’s second act would suit her plush middle register and not tax Goerke’s increasingly inconsistent top.

Unfortunately on Sunday that middle had become smaller and less generous and homogenous, intonation was inconsistent and the lowest notes were downright ugly. Sometimes she rang out with thrilling vibrancy but more often the strange judder? vibrato? edge? tremolo? that invades much of her forte singing was outright unattractive.

Her soprano has now grown so dark there was little contrast between her and Gubanova. Maybe it’s unrealistic to expect ear-caressing beauty from Wagner singing these days but then Goerke’s three colleagues served it up standing by her side. 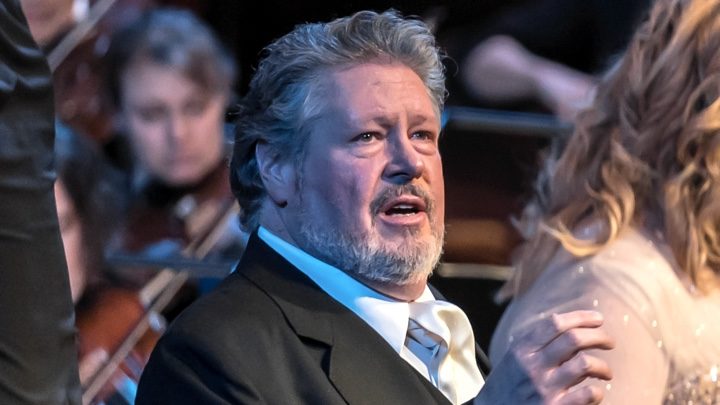 In an era that has suffered through a sore shortage of heldentenors Stephen Gould has had a shockingly barren career in his homeland. Since 2010 he’s appeared just 11 times at the Met; by avoiding late Wagner efforts by Deborah Voigt, I missed his debut role as Erik. I only managed to catch his Götterdämmrung Siegfried (opposite Katerina Dalayman) which displayed a far more authentically heroic sound than his meek alternate. His tireless, ringing Tristan Sunday reminded us how much we’d been missing since he vanished from the Met in 2012.

Singing with a big bronzed voice that enveloped the audience, Gould provided the sort of thrilling Wagner tenor singing I hadn’t heard live for a very long while, though admittedly I missed out with great regret on Stefan Vinke and Andreas Schager’s heralded recent Met debuts.

If not the most poetic interpreter, he shaped Tristan’s growing ardor and eventual humiliation with detail and nuance and a welcome care for dynamics. In many passages of the love duet one heard some really beautiful, tender singing. All at Geffen knew why he has been such a necessary fixture at the Bayreuth Festival and other European houses.

Until her knee injury sidelined her this summer, Ekaterina Gubanova was to have been Gould’s Venus in the new Tannhäuser at Bayreuth. The Russian mezzo has long been a distinguished Wagnerian—I heard her as a glowing Brangäne at the Bastille in Paris in 2005—and her urgently expert performance Sunday was yet another wonderful example.

That said, she like many other Brangänes before her came to grief in the Warning where singing through an opening at the back of the stage her voice was far too prominent. And the long high treacherously exposed lines caused her to wobble precariously.

Just as Georg Zeppenfeld virtually walked off with the Boston Symphony performance last year, Günther Groissböck strode onstage slightly before 4 o’clock and delivered a nobly wounded Marke that was anything but an anticlimax after the anti-climax. 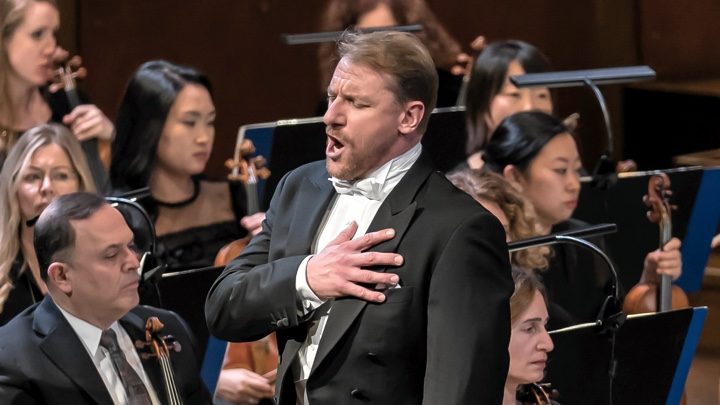 One had to wonder how Isolde hadn’t fallen instead for this handsome, eloquent king. Marke isn’t usually expected to sound youthful and vigorous but Groissböck was just that and his transfixing long monologue was the highlight of the afternoon. His first-ever Wotans will surely be the highlight of this summer’s new Bayreuth Ring.

Noseda has apparently been working his magic with the DC group whom I was hearing live for the first time. Although there were awkward moments–the propulsive opening lumbered along rather than soared and other transitions failed to cohere—but his sumptuous orchestra cushioned the singers with a ravishingly reading that flourished most effectively in abandon than repose.

Where Nelsons luxuriated in the sensuous “O sink hernieder” section of the love duet, Noseda instead relished the excited drive toward the orgasm that never comes. While Goerke got covered once in a while, otherwise he beautifully supported his singers and his very athletic podium demeanor only distracted now and then.

Fortuitously New York will hear Groissböck’s Marke in its entirety this season when Nelsons and Kaufmann resume their exploration of Tristan with the third act in April at Carnegie Hall: top price $175 for just 75 or so minutes of music! Kaufmann is the only returning lead from the 2018 roster with Emily Magee and Michelle DeYoung taking over.