The opera The Rake’s Progress, as many people know already, was inspired by a series of engravings and paintings of the same name by William Hogarth, showing the decline of a young man into depravity and insanity. 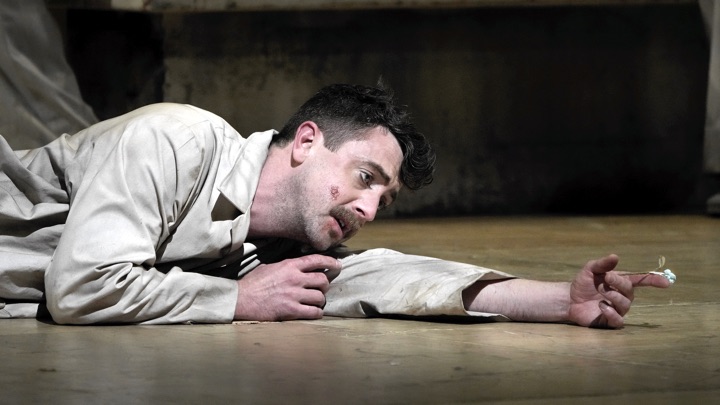 And like the visual art that provided its source, Stravinsky’s opera is concerned with appearance, surface, depth, images that contain excess information.  It is also concerned with scratching the surface (if you’ll excuse the engraving metaphor) of the past—both the musical past that Stravinsky is filtering though his Neoclassical style, but also the fantasy of a more straightforward morality of eighteenth-century.

Within this style, everyone is exactly what they promise to be: Tom Rakewell is the rake in question, while his innocent love interst is called Anne Trulove. Their names say it all, in what Franklin P. Adams would call an “aptronym” (anagramically related to “patronym”). The brilliance of W.H. Auden’s and Chester Kallman’s libretto is the way it deflects, complicates, and makes strange that surface (much in the way Stravinsky’s score makes Mozart and the entire classical style strange), shifting through clusters of syllables, glancing off the morality tale’s predictable edges, quirking its eyebrow the whole time.

Rake’s Progress wears intellectualism on its sleeve, while keeping emotion at a distance—but only when things are as they appear, when the most obvious solution is the correct one, or guesses made by instinct turn out to be correct. Tropes, both musical and narrative, abound. Between and among these moments, there is considerable humanity, ambiguity, and ambivalence.

The Rake’s Progress is a personal favorite of mine, because it takes great pleasure in the beauty of surfaces, of trope, and of expectation through its wryly satirical world view; the plot is picaresque; the moral is obvious, the characters are stock. Pleasure, which only partially drives Tom, is at stake for us here, the pleasure of listening to the past returned to us,  and of knowing, or thinking we know, what characters, are and why they do what they do. 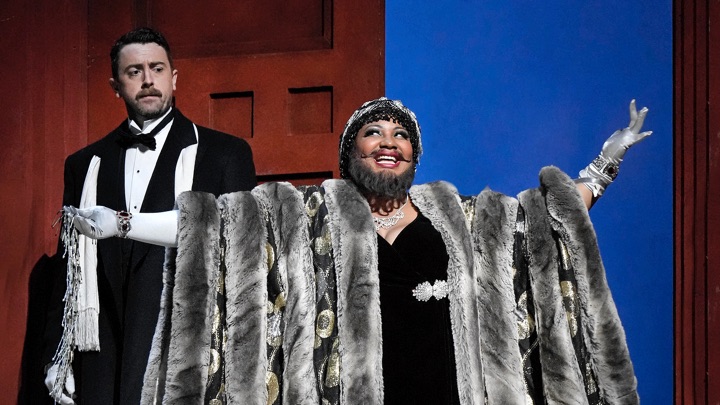 Thus, finding the depth is a function of looking at the surface, instead of past it, of catching the shading that surrounds the broad strokes. When the moral of the story is delivered at the end, it begins to feel more and more subversive, without ever truly revealing why that is. This opera fascinates me, and it also resists me.

Jonathan Miller’s revived production, while attractive and pleasing even after twenty years, does little to enhance or interrogate the story, its unclear setting sometimes beautifully evoking the flat planes and bold colors of 1930s WPA art (though why that style is compelling for this remains unanswered), sometimes feeling too fantastical (the Trulove’s house), and sometimes too boringly realistic (as in the brothel scene).

A new production would be welcome here to highlight the intelligence of the work,  but in comparison with the drab parade of recent months, I’ll happily keep this for its use of color, amazing jackets, and giant sharks.

Susanna Mälkki’s lucid conducting and some very fine work from the orchestra (especially the winds and brass), brought necessary wit and clarity, allowing us to hear the layers of Stravinsky’s score as if broken apart via spectrograph. Her work, and this production as a whole is hampered significantly by the endless and frequent “brief” pauses to change the set completely between every scene. 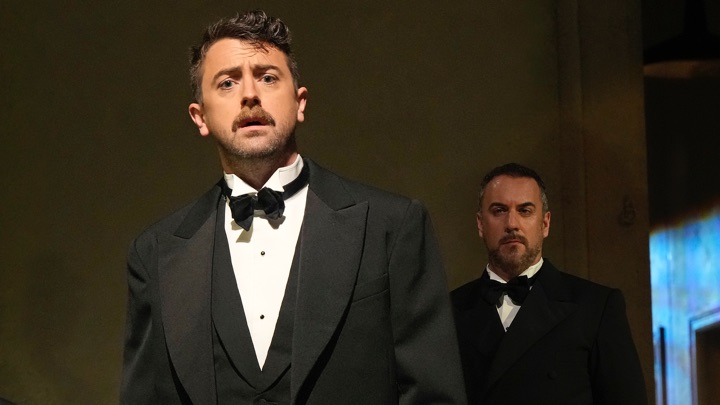 By the fifth time one of these appeared in the combined Acts I and II, I and everyone around me was audibly annoyed. They break up the drama and flow so thoroughly, leaving Mälkki and the orchestra to build back up the momentum from the ground floor after every scene change. Mälkki’s consistently energetic direction and the uniformly excellent singing ultimately overcame this, but it was a sad reminder of how much ill thought-through production choices can affect even the best performers.

Ben Bliss was in excellent form last night, crafting a beautifully passive Tom Rakewell with his sensitive and clear voice. The easy lightness that characterized his sound in the first half gave way to increasingly heartbreaking tenderness, especially as “Adonis” in the third act, where his voice broke open to reveal great swathes of loveliness and pastel shading.

He wears rakehood uneasily and completely without malice, using his wide-eyed, youthful face (he’s a dead ringer for Edward Norton with this hairstyle) to keep Tom feeling innocent, even when he’s choosing depravity. The evil of Bliss’s Tom Rakewell was one of nonchalance, of entitlement, of doing things for a laugh and not thinking anything through. He goes for what he thinks he should want, or whatever a stronger personality tells him to want. It’s an excellent portrayal that doesn’t fall into easy the traps criticism of entitled men.

The brilliance of Christian Van Horn as Nick Shadow was that he was truly Bliss’s shadow self. He was easygoing instead of outright evil, Bliss’s Tom needed little convincing, giving Van Horn a welcome lightness as well, more of a low-level conman than an agent of Satan.  Only his flinty bass-baritone, which only improved as the night wore on, anticipated his eventual terrifying turn in the third act. 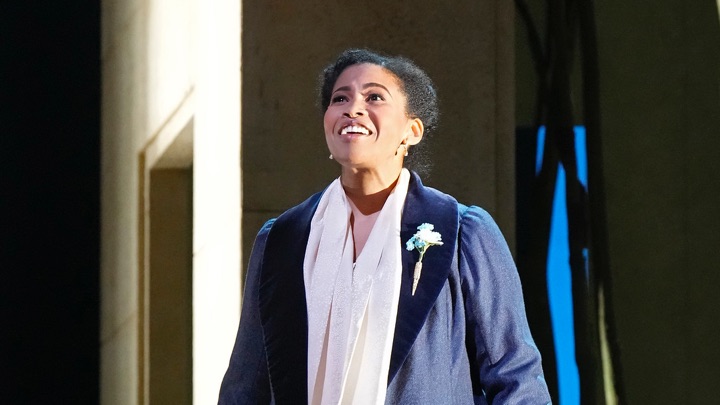 Their matching silly goatees only heightened their connection as two sides of a single character. Both, in keeping with my theme of surface and depth, began by sounding how I expected them to, but this archetypical sound gave way to subtlety and surprise.

Golda Schultz, as the angel brushed off Tom’s shoulder, brought balance to the cast, rooting her Anne through her rich middle voice and creamy, breathtaking high notes. Schultz exuded kindness and grace, and shone especially in her ensembles with Baba the Turk (more on her below) and in her brilliant work in the third act, where she managed to be comforting, rueful, sympathetic, and resolved at once.

Her goodness feels dearly bought, instead of a product of her stock-character nature. Her excellent first act aria, a true favorite of mine within English-language repertoire felt too short to contain her, and I wish she’d just sung it a few more times during the subsequent scene change.

As her Father Trulove, bass James Creswell, brought an organic richness perfectly contrasted to Van Horn’s metallic edge, making himself memorable in this small role with nicely calibrated balance of supportive father and stern in-law. A good opera dad! And just in time for Father’s Day in a few weeks.

Raehann Bryce-Davis, where have you been all my life? Please share your beautiful coats and excellent comic timing with me: I will be waiting at an altar of your choice. As Baba the Turk (obviously the best role in the show) Bryce-Davis brought as steam-engine of sound and energy to match, leading to a delightfully unhinged and, eventually, surprisingly soulful Met debut.

She radiated the joy and excitement of a serious actress finally allowed to flex her comedy muscles in a series of increasingly fabulous outfits and a bedazzled beard reveal that made me, as RuPaul would say, gag, hunny. Her interactions with auctioneer Sellem (a superbly funny and bold-voiced Tony Stevenson) were worthy of their own spin-off show, as these two queens went at it to out-personality each other.

This was camp, and I did, indeed, live for it. Furthermore, just when Baba nearly veered into parodic territory (well, too parodic), Bryce-Davis revealed a depth of generosity and a welcome sense of self-awareness and self-love in her work with Schulz during the auction scene. Baba, unlike Tom, knows who she is, and that will carry her to happiness. Her own developed sense of self-irony aligns her more with her creators than with her fellow characters.

Wherever a character could have been one note, they revealed subtle depth and shading from within that single tone. Cleverness, ease and lightness can be their own type of emotional powerhouses. Stock characters can yield more nuance upon closer inspection. Surfaces can be as interesting as what they conceal.