Mark, with thee we mean to live

People these days often exclaim “…..is everything!” but often it feels like gross hyperbole. But surely anyone who has seen Mark Morris’s L’Allegro, il Penseroso ed il Moderato since it premiered in 1989 would agree that it is indeed everything! 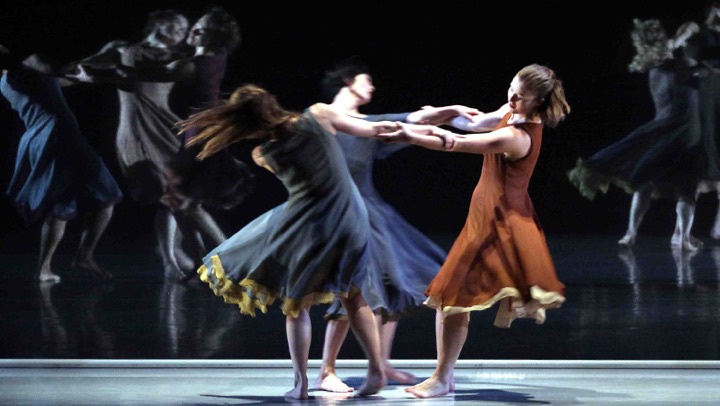 The Mark Morris Dance Group hadn’t performed L’Allegro for six years when it retuned last week to the Brooklyn Academy of Music, the site of the work’s 1990 US premiere, to present four performances. I attended the final one Sunday afternoon which ended with the raucously rapturous cheers commonly heard at MMDG events, yet this ovation struck me as especially grateful and heartfelt.

Few stage works are as radiantly beautiful and graciously humane as L’Allegro which marries Handel’s exquisite pastoral ode to life-giving communal dances that inevitably elicit tears and chills from me, at least it has during the five occasions I’ve been lucky to experience it live.

Though not much of a dance person then, I began to read a lot about Morris in the mid-1980s, I was particularly intrigued that he frequently set his dances to baroque vocal music. When PBS aired Mark Morris: Dance in America in 1986, my trusty Panasonic VCR recorded the program, and I got my first glimpses of his entrancing choreography, including excerpts from Gloria, his Vivaldi dance. His oeuvre also includes Jealousy and Jesu Meine Freude, settings of Handel and Bach choruses, respectively.

I spent summer 1990 in New York City and caught my first Morris piece live, his version of Purcell’s Dido and Aeneas in which he danced both the Queen of Carthage and the Sorceress who engineers her doom. Several months later I was compelled to sneak back to the city for L’Allegro’s premiere. As much as I had admired Dido, L’Allegro proved something else: one of the most joyous experiences I’d ever had in the theater. I felt the same way Sunday afternoon—thirty-two years later–a testament to the work’s evergreen freshness.

Both L’Allegro and Dido owe their existence to the late impresario Gérard Mortier who invited Morris (then just 32) and his dancers to Brussels to be the resident company at La Monnaie for three seasons. There, with unprecedented resources available, Morris created L’Allegro which at BAM on Sunday featured 24 dancers, 4 vocal soloists, a chorus of 24 and an orchestra of 29! While in Brussels, he also devised The Hard Nut, his witty reimagining of Tchaikovsky’s The Nutcracker, which includes a most ravishing, gender-blended “Waltz of the Snowflakes.”

Once I moved to New York, I started attending both New York City Ballet and American Ballet Theatre and soon discovered that I preferred the former where I endeavored to see all the George Balanchine ballets I could. I soon realized via Stravinsky, Bizet, Hindemith and many others that I had to love the music to love the dance. This explained why I had such trouble with Merce Cunningham and Trisha Brown.

Every time I attend L’Allegro, I wonder how many in the audience were acquainted beforehand with Handel’s miraculous score which sets sections of John Milton’s poems L’Allegro and Il Penseroso, along with Il Moderato written by Charles Jennens, a frequent oratorio collaborator. I had gotten to know L’Allegro in college, so when I saw the dance, I immediately relished Morris’s much acclaimed musicality.

As L’Allegro has no plot or characters, each dance section might seem unrelated to the others, but the dialectic between mirth and melancholy that occurs in L’Allegro and Il Penseroso provides a bewitching mix that is only occasionally interrupted by bits of Il Moderato. Handel’s work ends with a chorus praising moderation but that would not be very “Morris,” so his finale is a triumphant show-stopper set to “These delights if thou canst give ,/ Mirth, with thee we mean to live.” Amen!

While many of the dances are abstract, occasionally a brief mimetic vignette emerges, like a hilarious one involving “hounds and horns,” In it, two foxes, hunted by a trio of scurrying dogs, hide behind trees represented by small groups of dancers. “Sweet bird,” the famous soprano aria with flute obbligato, gives one dancer the chance to winsomely imitate avian behaviors. In a divinely campy movement, six male couples have spats while taking turns smacking and slapping each other before swiftly making up!

Though many of the dances are quite intricate, several of the most striking involve seemingly simple variations of promenading. These include the breathtaking conclusion of the first act which begins with a graceful celebration then concludes with sleep magically overtaking the throng. The soprano-tenor duet “As steals the morn,” among the best-known numbers from the ode, also features the dancers walking in lines that gradually intersect in ever more intricate patterns.

Adrianne Lobel’s spare setting of scrims that rise and fall was again gorgeously lit by James F Ingalls, while Christine Van Loon’s pastel rainbow of costumes remain a feast for the eyes.

Of the four soloists who perform in the pit, the sopranos did the heavy lifting and Yulia van Doren (whom I also heard in 2013 at Lincoln Center) and Sarah Brailey sang beautifully—and one has a killer trill–although the necessary (?) amplification often distorted their highest notes. Brian Giebler and Joseph Charles Beutel both displayed fine agility and clear diction. I’m sure Morris would never accept the visual distraction, but I would love a L’Allegro where the sung texts were projected.

Morris returned to bucolic Handel in 2014 with a dance-staging of Acis and Galatea. I found it somewhat disappointing and it has not been revived since. Let’s hope it doesn’t take another 20 years for BAM to again present L’Allegro, a truly essential work.

After Mortier’s death, Madrid’s Teatro Real, his final opera company, videotaped the 2016 revival of L’Allegro which has been made available on DVD and Blu-ray. While it can’t replace a live L’Allegro, the video exists as an invaluable resource which I enjoy often.