In 2022, making Così fan tutte intimate is not a radical act. Making it enjoyable, however, is. 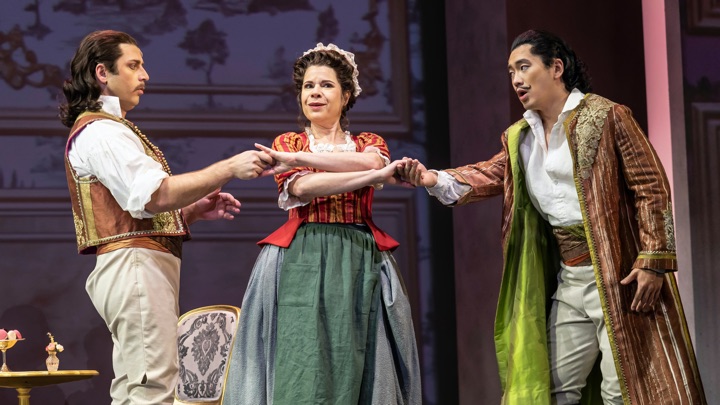 That is the quiet spirit that endeavors to ebb through Washington National Opera’s first fully-staged opera in two years which opened earlier this month at the Kennedy Center. Displaced from the Opera House by Jesus Christ Superstar, this production by Alison Moritz, in the smaller Eisenhower Theater, looks gently cheap ‘n cheerful with music making more refreshed than WNO’s pre-pandemic usual.

Maybe it’s that DC conservative (and, let’s be frank, lazy) audiences are still traumatized by Jonathan Miller’s 2012 smartphone-infused production. But in a context that would seem predisposed to read Mozart and DaPonte’s thorny farce for anti-feminist filth, this production, traditional but with attentive Personenregie and a sly twist at the end that I will not spoil, channels a sort of quotidian ebullience that, while not abstruse or provocative, acknowledges its meanest elements while letting this pillbox ring of an opera breathe as a naïve comedy.

Dare I say that I found this approach a little bit refreshing? Recent high-profile productions by R.B. Schlather and Christophe Honoré, rigorous and exhilaratingly intellectual in their own ways, have left me with positive impressions of the directors more than of the opera itself. There is an understandable fear of letting Così speak for itself, especially if it’s not crusted with concept or trivialized with powdered wigs.

And to play any of that as comedy, the way it was initially conceived, seems daringly retrograde. Jean-Pierre Ponnelle’s costumes may be retreads, and meager suggestions of a set (designed by Erhard Rom, decorated with infantilizing projections by S. Katy Tucker) sap the show of visual interest, but Moritz’s steady trust in the material saves this from being just one of WNO’s rote revivals.

The same can be said for the pit, who, under Erina Yashima has not sounded better since Speranza Scappucci conjured magic in 2019’s Tosca. While Yashima’s take on the score is not particularly lithe, she indulged in its finer details, eliciting honeyed sounds from an orchestra especially sensitive to her subtle direction. However, some stricter governance over the large-voiced quartet of leads, positioned in front of the onstage orchestra, might have been helpful as they frequently overwhelmed the Eisenhower with outsized force. 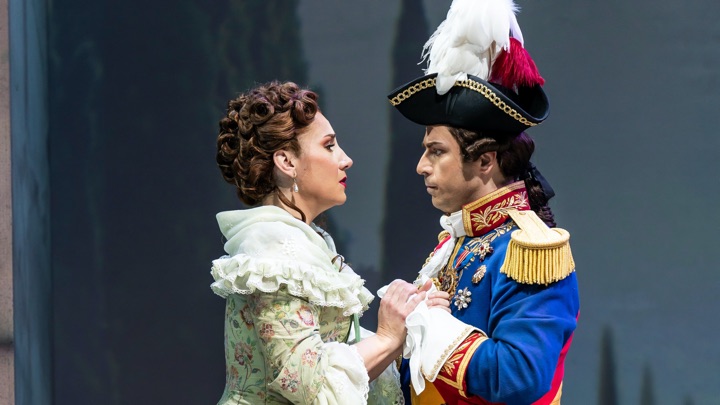 No singer was more guilty of this than tenor Kang Wang as Ferrando. His breath control is about the most impressive of any tenor I have heard in recent memory, and his sound retains its bronzed coloring across his range, but nowhere to be found was the suppleness and lucidity that gives an aria like “Un’aura amorosa” its lilting effect. While Wang’s reading cohered technically, it fell short on nuance and was emitted at one volume (loud). It’s an impressive voice, but not one for Mozart.

Laura Wilde, who herself wields a sizable and richly textured voice, showed some more restraint as Fiordiligi. The abrupt register changes of “Come scoglio” came to her easily, even if her robust lower range doesn’t have the full thrust of the pungent, expansive gleam of her high notes. But her delicate, introspective “Per pietà” was a second act highlight, her plaintive sighs soaring across the aria’s lines with steadiness and sensitivity.

“That is a Fiordiligi,”a friend remarked at intermission; I agreed. She blended easily with Rihab Chaieb’s Dorabella; while Chaieb’s smoky, chesty mezzo may not be distinctive where the role’s tessitura is concentrated, she was polished and musical and her “È amore un ladroncello” was seductive and free-flowing.

Andrey Zhilikhovsky, whose tenorial baritone (which predictably clashed against Wang’s baritonal tenor) was a solid Guglielmo who gained steam in the second act with an “Il cor vi dono” that was both elegant and forceful. Forceful and elegant, too, was veteran Ferruccio Furlanetto as Don Alfonso. Though the voice, after a nearly 50-year career, doesn’t much hold a pitch, his facility with the text was unmatched by anyone else onstage and his measured mugging gave this downsized production a necessary dose of extroversion.

Ana María Martínez, a reserved and intellectual artist, on paper might have been a good counter to Furlanetto. But in practice, Despina, a role that should sit right in the center of Martínez’s soft-grained voice, was an awkward temperamental fit. Despite a breeziness onstage and strong singing (save for the affected voices as the doctor and the notary), her sophisticated approach made a fainter impression than the quartet of leads and her chemistry with Furlanetto was fleeting.

When WNO last left off with staged opera, in an uneven Don Giovanni in 2020 that shared much of its creative team with this Così, it seemed stuck in a pattern of withering indecision about what its artistic priorities were (and how reconcilable those priorities were against its budget).

As Timothy O’Leary comes into his own as General Director (and giver of pre-show speeches, ostensibly since current Artistic Director Francesca Zambello has been AWOL all season), those priorities seem to be crystalizing. And if visual interest isn’t among them, the musical ones seem more consistent than they once did and I’d happily go back and hear this cast and orchestra’s take on the opera again. I’m not sure I can remember the last time I thought that about a show down here; it really is nice to be back, and maybe even back again.