This sterling revival shows the Metropolitan to be surviving well and in good shape. 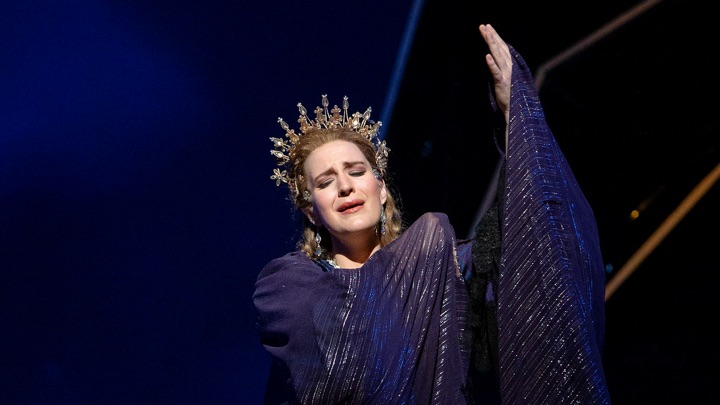 On Tuesday night March 1 the Metropolitan Opera revived Richard Strauss’ “Ariadne auf Naxos” for the first time in over 10 years—it last appeared during the 2010-2011 season.  A lot has happened at the venerable old house in the intervening 11 years—including some quite alarming developments over the last two years.  However, this sterling revival shows the Metropolitan to be surviving well and in good shape.

The revival of the late Elijah Moshinsky’s 1993 production (revival director Stephen Pickover) showed it to be still effective and stage worthy if a bit frayed around the edges.  This year’s revival cast showcases one of Peter Gelb’s most heralded new stars, the Norwegian dramatic soprano Lise Davidsen who is unveiling three roles in local debuts this season—Eva, Chrysothemis and Ariadne.  Almost all the current cast are new to their roles in the house but on opening night looked fully settled into their assignments, meticulously rehearsed and beautifully integrated into the production.

The Prologue has elements of operetta farce as the Composer, sung by local favorite mezzo-soprano Isabel Leonard, is attempting to put the finishing touches on his opera seria, Ariadne auf Naxos, which is to be performed as a private entertainment at the house of the richest man in Vienna.  Along for the ride are a commedia dell’arte troupe headed by the vivacious singer-dancer-comedienne Zerbinetta sung by coloratura soprano Brenda Rae.

The officious condescending Major-Domo (deliciously impersonated by retired Heldenbariton Wolfgang Brendel) informs all the performers that the commedia dell’arte farce and the opera seria are to be performed simultaneously throwing everything and everyone into confusion and the Composer into despair.

Leonard as the Composer, originally a soprano role, was visually charming and acted up a storm fully investing herself in the emotional extremes of the character.  However, she was also somewhat small-scale vocally failing to project her middle and upper registers over the orchestra.  The Composer’s big aria “Sein wir wieder gut… Musik ist eine heilige Kunst” seemed to stretch her resources to the limit with the soaring high climax emerging pressurized and tonally spread. 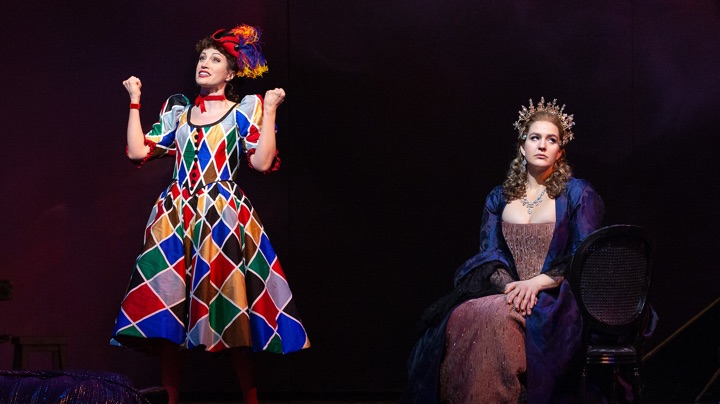 I think that Leonard’s scheduled Octavian in next season’s Der Rosenkavalier will require a great deal of restraint and accommodation in terms of orchestral volume from conductor Simone Young.  Michael Yeargan’s backstage set is quite open with wide platforms and soft drops in which voices can get lost and fail to project.

Veteran German baritone Johannes Martin Kränzle, so drolly malicious as Beckmesser in this season’s superb revival of Die Meistersinger also with Davidsen, scored again as the benevolent Music Master who is trying to be everyone’s friend and support even while they are trying to undermine each other.  Kränzle’s experience and native linguistic fluency added authority to his characterization.

Davidsen as the Prima Donna/Ariadne and Brandon Jovanovich as the Tenor/Bacchus were amusing in their various backstage tantrums though they are both handsome stage figures and did not suggest the offstage grotesquerie of the characters.

Brenda Rae’s Zerbinetta, like her Poppea in Handel’s Agrippina, initially seemed a bit of a vocal cipher. Physically resembling Jennifer Garner and acting with easygoing vivacity, Rae’s soprano seemed to lack tonal profile—high phrases didn’t gleam and soar and the love duet with the briefly infatuated Composer emerged earthbound.  You had no idea what she would bring to the opera proper after intermission.

Patrick Carfizzi’s supercilious lackey and Brenton Ryan’s vocally dry but knowingly pragmatic Dance Master were well-etched cameo characterizations.  Most amusing was Brendel’s overbearing Major-Domo dripping with disdain—the glee he brought to each mention of the “Feuerwerk” after the show with his entire body trembling with anticipation reduced the audience to helpless giggles. 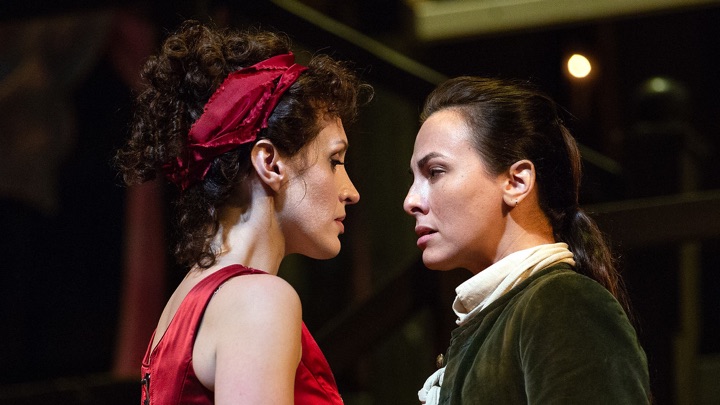 The second act began with a sterling trio of ladies, Deanna Breiwick as Najade, alto Tamara Mumford as Dryade (one returnee from earlier revivals) and Maureen McKay as Echo gliding across the stage in towering hoop skirts.  The comedians included such luxury casting as Ryan Speedo Green as Truffaldin and Miles Mykkanen as Brighella.

In his Met debut, baritone Sean Michael Plumb as Harlekin made a positive impression with a sunny relaxed demeanor and smooth vocalism.  His bright manner and full-voiced singing convinced in the role more than the usual undervoiced barihunk.

Both the comic and tragic prima donnas came into their own in the opera proper.  Rae combined sly earthiness with sunny good nature. Seeming to warm to her assignment, the soprano confidently worked her way through the circuitous intricacies of “Grossmächtige Prinzessin” with warm tone and secure technique.  Despite somewhat loose trills, her well-executed passagework and high notes scored a big ovation from the audience.

However, the biggest ovation came after Davidsen’s epic “Es gibt ein Reich” sung truly in the grand manner which continued over the antics of the comedians for what seemed like several minutes.

Often when old opera fanatics reminisce about the old days and great singing, it sounds like a time when giants walked the earth.  The heroic, big-scaled singing they describe from Corelli, Del Monaco, Nilsson, Rysanek, Tebaldi, Merrill or Tucker (and before that Ponselle, Flagstad, Melchior, Caruso, Ruffo) seems to have vanished from the operatic landscape. 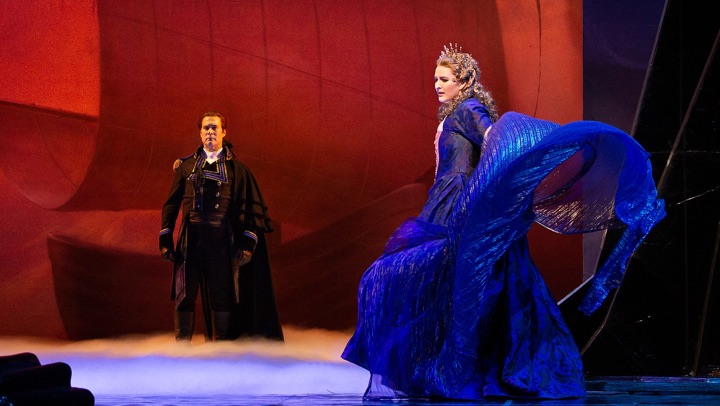 Davidsen on Tuesday night sounded like a throwback to the Golden Age of Opera.  Davidsen’s soprano is a huge seamless column of tone that is full and refulgent in each register.  The Norwegian soprano’s voice seamlessly traverses from a contralto-like lower register upward to a gleaming soaring top that expands without distortion or shrillness.

There are no breaks in the tone and no hard edges—quite similar in effect to the singing of her legendary compatriot Kirsten Flagstad.  Davidsen brought not only volume but dynamic variety and considerable tonal shading to the music with darkly covered phrases as Ariadne ponders death and large-scale floating pianos as she remembers her lost love.

A tall, handsome woman with a beautiful stage face, Davidsen also brought a thoughtful and often witty characterization to the abandoned princess—her fascination while one of the acrobats beguiled her with a levitating ball showed a childlike quality contrasting with her contemptuous haughty disdain for Zerbinetta.

Davidsen has mentioned in interviews that Ariadne was one of her earliest roles in Norway and one that she has maintained in her repertoire as her career went international.  Her command of the small nuances as well as effortlessly scaling Strauss’ demanding vocal peaks reveals a great singer who is also a fine artist.

Bacchus also gets to show his real stuff in the opera proper, a cruelly unrewarding challenge for most heldentenors. Richard Strauss’ music for tenors is notoriously ungrateful—too often relentless bellowing along the passaggio in tuneless declamatory phrases.

Most Bacchus contenders, if they don’t vocally collapse, resort to shouting the music.  Jovanovich never shouted and was always scrupulously musical.  As the interminable final love duet pounded fortissimo upon fortissimo, even he started to tire and lose momentum with his handsome dark tone turning wooden and dull.

Nonetheless, the Byronically handsome Jovanovich made a superior impression as Bacchus and sang it better than 99% of his competition current or historical.  Only the late and lamented James King or Johan Botha could have handled the music better.  It must be said that Davidsen and Jovanovich made the best case for this rather bombastic and diffuse duet that I have ever heard abetted by the authoritative conducting of Strauss specialist Marek Janowski.

The Polish maestro returned to the Met at age 83 after three decades absence (last gig a Salome new production back in 1989) and showed a cool mastery of Strauss’ score balancing the chamber music qualities with its broad Wagnerian gestures.  He elicited great lucidity of detail and precise playing from the orchestra.

One of the deeply reassuring and inspiring elements of this season is the continuing excellence of the Metropolitan Opera Orchestra.   They have maintained their high standards even after the expulsion, replacement and death of their longtime music director, a two-year hiatus and internal restructuring with new personnel.

This is even more surprising as the Met Orchestra had just come off the opening night of Verdi’s Don Carlos the evening before, an epic undertaking.  Some fatigue might be understandable but the playing was energetic and precise all evening.

When Strauss revised Ariadne auf Naxos as a standalone opera for its premiere in 1916, it was during the darkest days of World War I.  We all have been dealing recently with some dark days of our own with political and social unrest, illness and the looming threat of World War III threatening our peace of mind.  Ariadne, like Die Frau ohne Schatten (which also premiered during WWI in 1917), thematically is very much about reaching into yourself to overcome bitterness and despair and open yourself up to new love and new life.

Leave behind the damage that life deals you, the opera seems to tell us, and open your eyes and heart to a “new God” and be unafraid to love again.  Create new life out of the wreckage of your old life and be transformed and renewed!

It’s a message we need to hear right now—Lise Davidsen and her Met colleagues are worthy messengers.