Sondra Radvanovsky was a force of nature as Tosca on Thursday night at the Met. 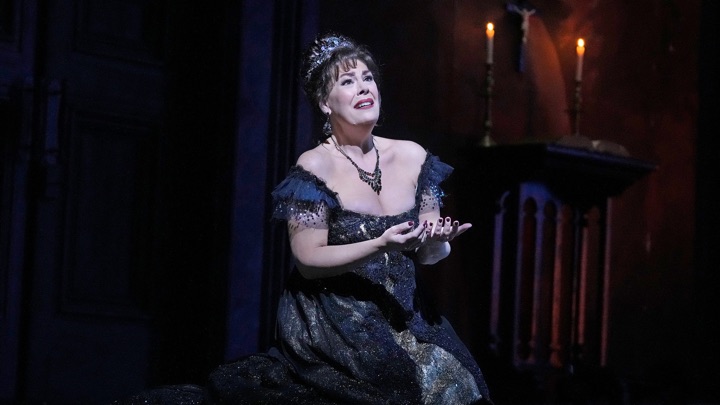 The soprano delivered an electrifying performance as the ill-fated heroine, bringing the house down with a forceful, guttural rendition of Puccini’s score.

Hers was not a flighty, proud, or haughty Tosca, but a raw, earthy donna di mondo —deeply endearing portrayal that lent a welcome sense of maturity to the role. Flashes of coquettishness were balanced out with moments of hearty brusqueness. Flights of jealous rage were tempered with an overriding air of hard-boiled warmth.

It’s hard to avoid the in-built melodrama of Tosca. But Radvanovsky’s heroine felt more grounded, less soapy than usual. The accusations of infidelity that she launches against Cavaradossi in the first act felt more like passing domestic tensions than sudden flights of passion: She rightly saved the hysterics for later in the opera.

In this way, Radvanovsky’s Tosca had a certain theatrical precision. The soprano avoided painting the entire role with the same emotional brush. Her characterization felt vivid, intentional, embodied, and, above all, dramatically specific.

However, when high drama was needed, she brought it by the bucketload. If she kept everything relatively measured in the first act, her second and third acts had a searing, propulsive energy – both vocally and dramatically.

Radvanovsky did not shy away from the grittier corners of Tosca’s vocal line. She barked, sobbed, growled, laughed, and shrieked as the drama compelled her, never afraid to let unfettered emotion color her vocal stylings. While Puccini purists might object to these noisy interpolations, I felt that they lent a certain vraisemblance to the score, very much in keeping with the composer’s verismo intentions. 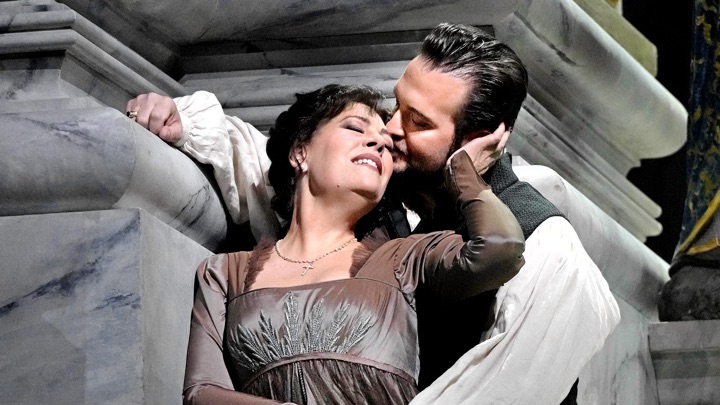 Yet, she never let the grit of her portrayal get in the way of beautiful singing. The top of the voice, especially, had an intoxicating intensity, particularly in the string of earth-shattering high Cs in the second act. If the sound wasn’t necessarily sweet, it certainly had color and vitality.

Everything about her performance felt essential. Those de rigueur facets of Puccinian singing – the messa di voce, the portamento, the soaring lyricism – did not feel like mere matters of form, but vital dramatic gestures, seared onto the grain of the voice.

Her “Non la sospiri” was relatively restrained, although not necessarily sung with the pertness and lightness that one might expect from the aria. However, it was full of charming musical details – silken, sugary touches that neatly rounded out the weight of the sound, more sensuous than flirty.

But it was her “Vissi d’arte” that truly stole the show. Suspended in glittering torment, Radvanovsky’s voice found a levity, a tenderness, a radiance in the aria’s opening phrases. Yet the aria’s climax—Tosca’s supplication to the God that has forsaken her—was given an ice-cold edge, the acid traces of Tosca-the-murderer already shining through. It was a heart-stopping rendition: unendingly expressive yet unexpectedly austere. It deserved every minute of the (five-minute?) ovation that it received.

In every other scene, Radvanovsky invariably outshone her castmates, making for a rather uneven performance overall.

Brian Jagde, the Cavaradossi to her Tosca, could certainly match her in terms of raw volume. His upper register, especially, could reach an ear-splitting bellow— ideally suited for a house of the Met’s size. This made for some particularly thrilling Puccinian climaxes. Between Jagde and Radvanovsky, the Act III love duet was turbo-charged with raw vocal power, propelling the listener towards the opera’s denouement. 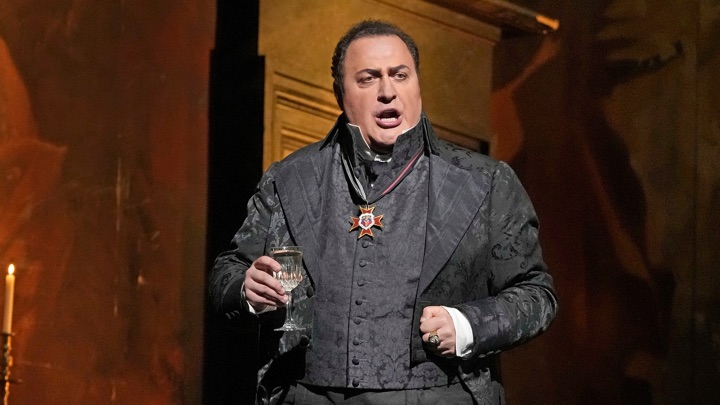 However, Jagde’s phrasing lacked color and contrast in the softer passages. Outside of the blistering climactic moments, much of his Cavaradossi felt rather uniform and directionless. To be sure, it was beautifully and dependably sung, but it lacked emotional contour or dramatic intention fault that became particularly apparent next to Radvanovsky’s more dramatically versatile Tosca.

His “Recondita armonia,” for example, was crowned with an explosive, full-throated high B flat. But the climax felt as if it came out of nowhere. None of the phrases preceding it seemed to connect to each other; there was no sense of emotional or musical momentum. “E lucevan le stelle” fared slightly bette— partly because this moment of musical and dramatic repose lends itself better to plain but pleasant singing.

The natural result of this was that we never truly got a good sense of Cavaradossi’s character. Cavaradossi is meant to be a charismatic artiste, a hot-blooded lover, and a fervent revolutionary: glimpses of this often shone through in Jagde’s performance, but not often enough to gel into a coherent dramatic identity. In the first few scenes, he was upstaged by Patrick Carfizzi’s scene-stealing sacristan, a veritable maelstrom of righteous condescension and punctilious tut-tutting.

George Gagnidze was a late ring-in for Scarpia, replacing an ailing Evgeny Nikitin. He certainly cut a terrifying figure onstage, leering and jeering at the suffering Tosca with sadistic glee. If only his voice had the same impact.

Gagnidze often lacked cut or presence; he was frequently difficult to hear above the orchestra; he certainly struggled to match the strength and definition of the soprano’s Tosca. In this endless fight to be heard, there was little room for artistic nuance: I wish that he had laid into the sleazy, animalistic language of “Ha più forte,” or at the very least played with the nuances of Puccini’s (offputtingly lyrical) vocal line.

Gagnidze’s sound was almost completely lost in the “Te Deum”—but this was partly because maestro Yannick Nézet-Séguin led one of the noisiest “Te Deums” that I have ever heard. The volume on the organ was ratcheted up to the max; the bells sounded a deafening peal; and the cannon-fire seemed like it could bring the Met’s roof down. It was an utterly apocalyptic vision of the Act I finale. 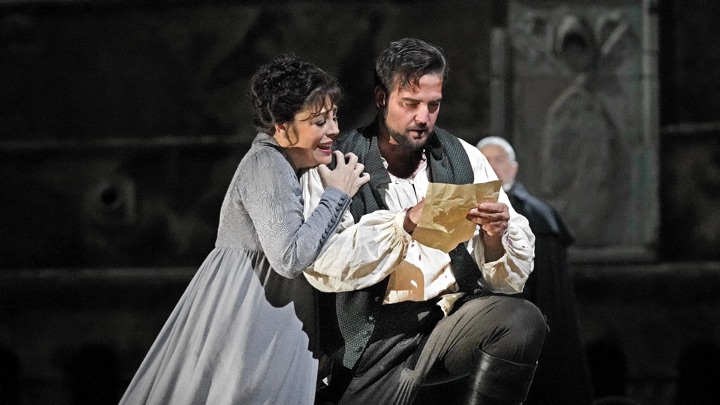 And yet, despite some outstanding moments, Nézet-Séguin’s conducting felt rather uneven. The first act had an acrid ferocity about it: Nézet-Séguin relished the scuttling, scurrying passages of Angelotti’s (Kevin Short, in fine voice) escape music, accentuating wiry moments of polyphony and overlooked, off-kilter dissonances; leitmotifs cut through the orchestration like lightning bolts, suddenly surging forth from the fracas with biting clarity.

The second act brought darker colors from the Met orchestra: Nézet-Séguin lingered on lower woodwind countermelodies during the torture scene; the strings, meanwhile, had a raspy, gravely quality—fitting counterpart to Cavaradossi’s agonized screams.

But Nézet-Séguin’s conducting became increasingly ponderous, increasingly turgid as the performance went on. At first, I chalked this up to difficulty aligning his musical vision with the artistic preferences of the singers: Radvanovsky’s luxuriant, weighty tempi often felt at odds with Nézet-Séguin’s terser, sharper-edged approach.

However, Nézet-Séguin took the orchestral interlude that opens the third act at such a glacial, lumbering pace that one wonders whether the wavering energy of the second and third acts wasn’t a symptom of the maestro’s unsteady approach to the score.

I personally think the David McVicar production is rather beautiful. It has more clarity, more focus than the Met’s Zeffirelli productions without sacrificing detail or spectacle. McVicar doesn’t bother with the kind of fussy, indulgent bibelots that adorn every inch of Zeffirelli’s stages.

And yet, McVicar’s production still captures the catholic grandeur of Tosca: the breathtaking Renaissance fresco that covers the walls of Scarpia’s chambers serves as a sumptuous background to the harrowing scenes of torture and attempted rape of the second act. It serves as a highly watchable compromise between those who yearn for the operatic splendor of Tosca stagings past and those who like their Tosca on the darker, edgier side.