I can’t imagine anyone watching this two-hour schlockfest at home and then dropping $150 for the privilege to see it again, masked and in an uncomfortable chair. 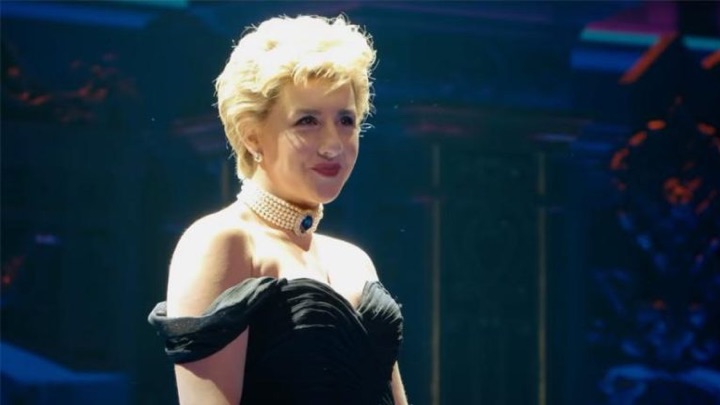 Cameron Kelsall: In a perfect world, Diana The Musical would live up to its lyrics: “Sometimes it’s best to be underestimated.” Expectations for this pop-rock profile of the People’s Princess certainly couldn’t be deeper in the basement. Despite dismissive reviews for its trial run at La Jolla Playhouse in California, the musical proceeded to Broadway, where it played one week of performances before the coronavirus shut it down. The producers then pivoted to Netflix, where the show can now be seen in its entirety—no doubt a ploy to gin up interest in advance of its New York return. (Performances resume on November 2.) It’s a smart idea in theory to release a slickly shot, breezily edited musical to a theater-starved audience just getting comfortable with the prospect of heading back to Broadway, but I can’t imagine anyone watching this two-hour schlockfest at home and then dropping $150 for the privilege to see it again, masked and in an uncomfortable chair. Not only did the advanced word not underestimate the simplistic cheesiness of the show—written by Bon Jovi keyboardist David Bryan, who certainly isn’t giving Peter Morgan a run for his money as a Royal chronicler—the final product is sadly worse than I could have imagined. Whereas Lady Di herself radiated easy charm and genuine compassion, this dramatization is bogged down by forgettable music, bland acting and the exact kind of cheap tabloidization that the Princess of Wales suffered too often in life.

David Fox: Qualitatively, it would be almost impossible to underestimate Diana The Musical. Forgive me, but it doesn’t even rise to the lowest level of (groan) bridge and tunnel entertainment. Taking a wider view, I’m really struck by what a ghastly month it’s been for filmed musical theater more generally—by which I’m certainly also thinking of the Dear Evan Hansen movie. To be fair, the two are worlds apart. DEH is (or at least, was) a lightning-in-a-bottle property, with a hugely praised, star-making leading performance (Ben Platt, of course) that is also the centerpiece of the film. And a film is what it truly is rewritten and recalibrated for that medium, and presumably shot in a studio setting. Diana The Musical, on the other hand, is (by those standards, at least) a modest affair. The show has no track record to speak of; no real stars (the indomitable Judy Kaye in a supporting turn is the biggest name here); and early word of mouth is already dire. Recorded here, without an audience, I assume it’s otherwise a quite faithful representation of what we’d see on the Longacre stage if we were crazy enough to go. But really, who would contemplate it after seeing this? For me, the major takeaway in both cases is how difficult it is to successfully film a musical, especially a non-diegetic one. As for Diana—a shameless rip off of Andrew Lloyd Webber in general and Evita in particular—it, like its heroine, feels stuck in the ‘80s.

CK: The ‘80s was the decade of Diana, at least in Britain, as well as the decade when the composer’s career as a “hair metal” musician flourished. It makes sense that the final product here is a cheesy throwback. (Bryan’s collaborator is playwright Joe DiPietro, whose other credits include Tony and Tina’s Wedding and I Love You, You’re Perfect, Now Change. That should give you some idea of the taste level to expect.) The score hums with generic synthesizer rhythms and heavy drum beats, and no song lodges an earworm unless it sounds like a rip-off of a more popular pop song—”I Will,” one of Diana’s several anthems of self-actualization, employs a melody identical to Jefferson Starship’s “Nothing’s Gonna Stop Us Now.” Evita surely is the template, but this duo is no Webber-Rice, and leading lady Jeanna de Waal is no Patti LuPone (or even Loni Ackerman). In actuality, it’s closer to the now long-forgotten pop-driven musicals that populated Broadway and the West End in Evita’s wake: remember Marilyn! or Jean Seberg? 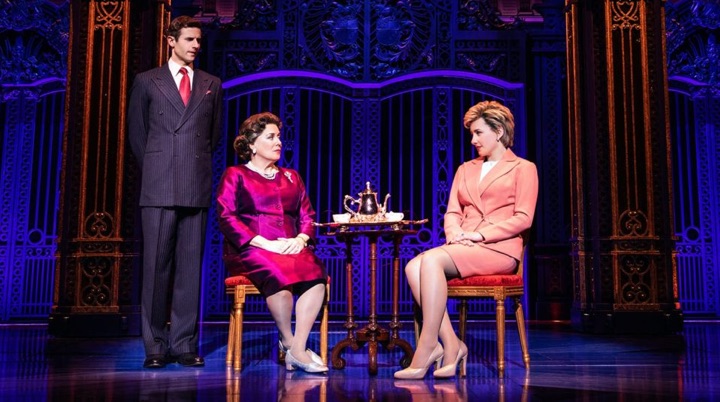 DF: And Christopher Ashley, at least based on his work here, is certainly no Harold Prince. My sense of Evita, which I (prepare for bragging rights) saw in literally its first U.S. performance, as well as many times after, is that while the score—to my mind, the best of Lord Lloyd Webber (wow, that’s a mouthful) existed as a concept album long before the stage, it was Prince who shaped the material with superb theatrical flair. I’ve seen a lot of Prince’s work, including all the major Sondheim collaborations. But something about Evita really brought out the best in him. It played to his Brecht-Meets-Broadway sensibility perfectly. Ashley’s direction here, on the other hand, is one visual cliché. But also—Diana lovers, please forgive me—the heroine here is far less complex and interesting than Eva Peron.

CK: To its credit, the musical gets right much of what made Diana a public icon. She was guileless and approachable, a sharp contrast to Windsor austerity, and she projected an air of genuine caring. She was also fairly guarded, which allowed others to transform her into an avatar of their own hopes, dreams and feelings. That’s all well and good, but it doesn’t make for a particularly scintillating story. In fact, the moments when Bryan and DiPietro most try to channel Evita baldly underline the material’s limitations. The Act I closer, “A Pretty, Pretty Girl,” finds Diana coming into her own, manipulating the press to do her bidding and making the system in which she’s trapped work for her cause. The clear antecedent here is “Rainbow High,” but without the teeth—Diana remains likable, warm and somewhat remote, and we don’t fully grasp her inner workings. It also doesn’t help that de Waal, despite being a genial presence with a sweet voice, is neither edgy nor lit-from-within as the real Diana was.

DF: Certainly no one would describe Miss Patti LuPone as a “genial presence!” But I feel for de Waal, who I think is saddled with an impossible task. Where Eva Peron has a clear trajectory, Diana’s is all over the place. One minute she’s manipulating the press and glowering knowingly at the audience (everybody glowers at the audience, Les Mis style); the next she’s bravely shaking hands with AIDS patients. The whole approach here to biography is not to work through actual characters, but instead to evoke a succession of famous moments. The music does nothing to flesh it out, though I did welcome the lack of full-out screlting here. (Maybe a byproduct of British restraint?) Roe Hartrampf is similarly challenged as Charles—he bears a reasonable resemblance and has a decent singing voice, but really nothing here to remain in memory. (That might be a way to evoke Prince Charles, but only if you have a Diana who has more going on than here.)

CK: It also doesn’t help the central story that Erin Davie, who plays Camilla Parker Bowles, is far more accomplished and memorable than de Waal (and nearly everyone else onstage). Despite the musical’s attempts to paint Camilla as a vicious usurper—Diana calls her “the Rottweiler”—Davie infuses her portrayal with dignity and grace. She also beautifully sings “I Miss You Most on Sundays,” the score’s one memorable song—well, memorable for the right reasons, at least. Davie’s soprano is limpid and golden-threaded, and she suggests a quiet decorum in Camilla’s long-held flame for Charles. This is no gauche Wallis Simpson redux. And you have to give her credit for enduring with a straight face lyrics like, “It’s the thrilla in Manilla but with Diana and Camilla.”

DF: Seriously, we could fill a 2,000 word review of DTM by doing nothing but quoting hilariously awful lyrics. Also, “I Miss You Most on Sundays” feels uncomfortably reminiscent of “Tell Me On a Sunday.” But I digress. For me, the other positive takeaway (after Davie) is that Judy Kaye is back in the best voice I’ve heard her in for several years. Now in her early 70s—45-plus years into a career as one of the theater’s greatest singers—she remains astonishingly on her game, vocally at least. She’s hampered here by playing both Queen  Elizabeth and … wait for it… Barbara Cartland. (Really, do you need to know more about DTM than that?) Kaye is a hoot as Cartland, though it’s pretty low-hanging fruit: you might have thought it was impossible to vulgarize Barbara Cartland, but guess again. She’s okay as Elizabeth, but I don’t really think patrician is quite in Kaye’s wheelhouse.

CK: Kaye’s Cartland, a characterization so garish it would make Dame Edna blush, is really where this material lives. At the end of the day, no one is coming to DTM expecting a thoughtful, restrained discourse on the vagaries of royal life. You can get that watching The Crown in your sweatpants. You come to hear how “James Hewitt did do it”—another actual lyric!—and to gawk at the OTT costumes by the now thoroughly cancelled William Ivey Long. But it strains credulity to think that snickering hate-watching will translate to a Broadway hit, especially at a time when the live theater industry seems barely on its feet.

DF: Amen to that. There are a few precious moments when the sheer ghastliness of this show crosses into sublime camp—nowhere more so than the arrival on horseback of a shirtless Hewitt, shrieking: “I’m JaaAAYaaAAYaaAYmes Hewitt,” as if we might have otherwise mistaken him for Princess Michael of Kent. But these moments are few and far between, and engulfed in tedium. The show hasn’t even reopened, but I’m already looking for the closing notice. Maybe I’ll be able to pick up Prince Charles’s gorgeous dressing gown on the cheap at a jumble sale!