That’s why I pulled the trigger

Watching Gloria Grahame—lips moist and parted, eyes staring off into some faraway middle distance—is absolutely arresting. She looks like the quintessential Noir femme fatale that was, in fact, probably her principal calling card. 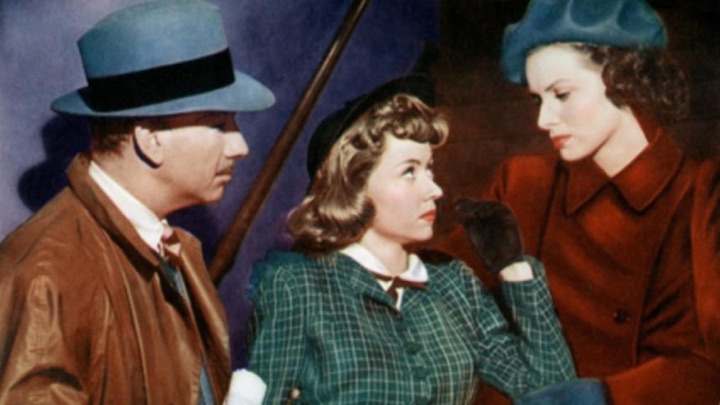 DAVID FOX: Cameron, I’m delighted we’re back in the tandem saddle for a 1949 movie I’d never known! Having now seen A Woman’s Secret, it’s hard to believe I hadn’t fixated on it before. For one thing, I love director Nicholas Ray. For another, it’s based on a novel by Vicki Baum, whom my Berlin-born mother used to mention disapprovingly, as though Baum (who is mostly famous for Menschen im Hotel, better known in the U.S. as the movie Grand Hotel) was Vienna’s answer to Danielle Steel. Certainly, there is a sudsy quality to A Woman’s Secret—but that doesn’t begin to cover it. It’s by turns a melodrama, a Film Noir, a caper comedy, and so much more.

CAMERON KELSALL: When our own JJ recommended that we take a look at this movie, I remembered that I’d actually seen it once—as part of Ray retrospective at Film Forum several years ago, on a double-bill with the equally uncategorizable On Dangerous Ground (Robert Ryan and Ida Lupino). The only thing I recalled was a line spoken by Gloria Grahame, playing a hick shopgirl who’s transformed, Pygmalion-like, into a glamorous diseuse, and who originates from Azusa, California. “Everything from A to Z, USA. A-ZU-SA.” I can’t say the writing gets much better, despite a script by none other than Herman J. Mankiewicz, and much of the plot feels decidedly B-level. Yet like many of the wackier entries in Ray’s filmography, it’s compulsively watchable and often quite intriguing.

DF: Minutes before the movie ends, Susan, the central character—played by the greater than great Grahame, who was, famously, both Ray’s wife and his daughter-in-law, though not the same time; and for whom this film is a must-see—receives a telegram: “Hard to tell whether you think you’re being funny but believe me I’m completely serious.” Um, okay. 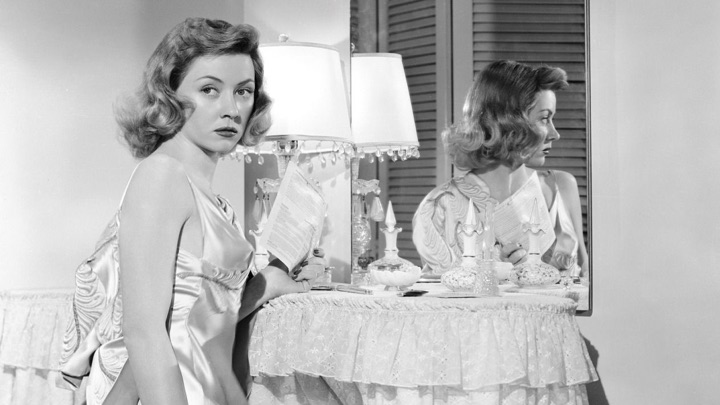 CK: Really, that telegram just about sums up the film, doesn’t it? It’s often hard to tell whether we’re meant to laugh or lean to the edge of our seats. And that’s where it gets much of its charm.

DF: For me, almost from the start, we have what look like two rather different movies—neither of which is really quite what AWS ultimately means to be (whatever that is). First, we have a quintessential Gloria Grahame moment, where she stands stock-still in a broadcast studio, wearing an eye-popping evening gown, and singing Manuel Ponce’s ravishing “Estrellita.” We learn that this is her big radio hit—so much so that she’s been re-christened Estrellita over her given name, Susan. As you might imagine, this causes some narrative confusion, but I guess we should be grateful that her signature song/stage name wasn’t “Make It Another Old Fashioned, Please,” or “When the Roll Is Called Up Yonder.” But I digress. Watching Grahame—lips moist and parted, eyes staring off into some faraway middle distance—is absolutely arresting. She looks like the quintessential Noir femme fatale that was, in fact, probably her principal calling card.

CK: Indeed, except that in this case, Grahame is the victim rather than the vixen. This is the point where the plot makes unexpected diversions in several different directions—and where genre starts to get blurry. There’s the feel of a classic women’s picture in the love triangle between Grahame, Maureen O’Hara and Melvyn Douglas, the latter two playing a Svengali-like pair of industry insiders who remake Estrellita as a way to realize their own misbegotten showbiz dreams. The Noir element comes into play when O’Hara’s Marian Washburn allegedly shoots Grahame, an act that brings several shady characters out of the woodwork. The investigation surrounding the shooting resembles a Keystone Kops movie, with a wise but harried detective and his ingratiating wife, who fancies herself an unofficial member of the squad (played by Jay C. Flippen and Mary Philips, both delightful). Each section of the film is captivating in its own right, especially if you don’t spend too much time trying to piece the disparate parts together. 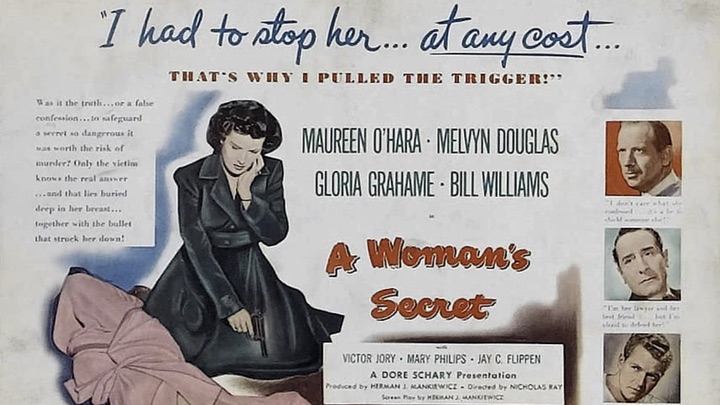 DF: Whew—I have whiplash just reading this. But I’d say there are additional weirdnesses beyond even what you’ve just covered. O’Hara, for one—she’s quite wonderful here, both as an actress and a singer (she’s rarely remembered for the latter, though she has a first-rate musical theater soprano). But I so associate her with good-girl roles! I mean, she’s the mother in The Parent Trap, for heaven’s sake! But here, she’s not only a controlling Mrs. Danvers type, but there’s also some unmistakable lesbian overtones in the early scenes. (“It’s Phantom of the Opera meets Madchen in Uniform!” could have been the pitch line.)

CK: Indeed. Although she gets something of a redemption arc in the end—not to mention the guy—she’s entirely convincing as a cold-as-ice impresario who would do anything to keep her meal ticket in place. Beyond the latent homosexuality, there’s also the overt creep factor of Marian, a promising soprano who loses her voice, molding Susan/Estrellita into the person she wishes herself to be, an unsettling mirroring effect. It’s a complex, surprising performance.

DF: This is probably a good place to point out that Grahame is dubbed by an unnamed singer, whose silky-smooth, Jane Froman-style vocals suit the role she’s playing. But that’s just it—the character who sings (“Estrellita”) seems not at all like the one off-stage (who might as well continue to be called “Susan”). In essence, Grahame gives two quite different performances. Estrellita delivers her songs as if they were a porn money shot—every note and gesture feel like an act of electrifying sexual aggression. But when she’s in conversation with others, Azusa feels closer to home. This is Grahame as a delightfully awkward, adorably quirky local girl.

CK: Yes, and that choice actually works well dramaturgically. Estrellita is a creation; Susan is a blank slate. Grahame handles the duality well. And of course, it’s of a piece with the general tone of the film, where nothing can ever be trusted to be as it seems.

DF: It’s also a reminder that Grahame is an actress of much greater range than she’s often remembered for. The femme fatale persona really stuck, and certainly she’s among the greatest Noir actresses ever. But I absolutely love her as Ado Annie in Oklahoma!—where she does indeed sing for herself, in a thread of a voice that works very well in context. And she gives one of the most charmingly off-center performances I know.

CK: We were talking the other day about one of her final screen appearances—as Mistress Page in a television adaptation of The Merry Wives of Windsor, equally surprising and equally good. Her sordid personal life and early death seem to be what she’s remembered for, but she’s someone whose talent deserves a rediscovery.

DF: Really, A Women’s Secret is such an odd and overstuffed movie that we’ve only begun to peel back the layers. Flippen’s hard-boiled detective is fun, and the final gear shift—two middle-aged biddies, played by Philips and Virginia Farmer “solve the crime” in a Snoop Sisters turn that makes no sense, but is sort of entertaining on its own. But it’s Grahame who ultimately makes this memorable.

CK: All of that oddness is stuffed impressively into an 80-minute running time too! While you might not want to visit Azusa, or find yourself alone with Maureen O’Hara and a revolver, this mostly forgotten picture is a secret worth sharing.