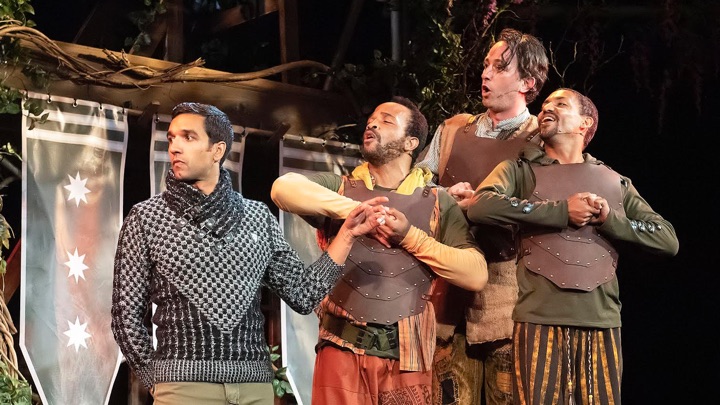 Those still craving a King Arthur fix after Bard’s outing with Le Roi Arthus earlier this month can look no farther than Bridgehampton, Long Island where Bay Street Theater has pulled a sword from a proverbial stone in fearlessly wresting Camelot from its heavy, gilded frame and transporting it not only to the balmy outdoors, but into the real world.

Any modern-day mounting of Camelot (especially in Bouvier-Beale territory) involves scraping away the problematic work’s crusty mythos: it’s identification with the Kennedy presidency, the opulence of its original staging, the singularity of Julie Andrews, Richard Burton and Robert Goulet in the leading roles, and its majestic score and delightful lyrics. Performed with its standard trappings, Camelot’s preachy yet indirect philosophizing, the lengthy book’s most prominent problem, reeks. Sans bombast, the Verdian dilemmas the characters grapple with come across as pompous and trite.

Pared down to its purest form, as it was on Saturday, the show that remains is gentle and naïve, even with its violent episodes. Its argument that idylls are bound more persuasively by morals rather than monarch or environment is still resonant (maybe eerily so, these days), though its takedown of that idea—along with its central character—becomes depressingly fatiguing around hour 2.75. All this is to say that messing with the scale and scope of Camelot is chancy and challenging—honoring its iconic nature has become de rigueur lest we to reveal even more of its seams by futzing with it.

Considering the work’s inherent lumpiness, the achievement of director and BST Artistic Director Scott Schwartz is even more commendable. They have trimmed it to a tight 2:15 thanks in large part to the truncated book by David Lee (whose only major misstep is excising the Merlin scenes, which endear us to Arthur more than anything else in the show), introduced an unintrusive framing device that centers the story within its own genealogy rather than its modern-day cultural currency, and made it chamber-size without slowing it down. 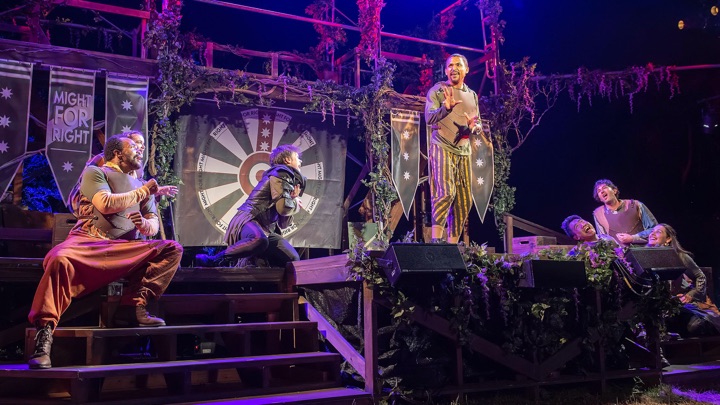 The show remains fleet in large part because of its able cast, anchored by an incandescent Britney Coleman as a smart, spunky, utterly unencumbered Guenevere. With a powerful belt and mix with an acidic tinge reminiscent of Renée Elise Goldsberry, she is neither fussy nor fateful, moves with ease through Marcos Santana’s gestural choreography, and, in line with the concept, makes the love triangle at the center of the story a more pained, personal decision rather than a world-altering death wish. She’s covering the cerebral Katrina Lenk as Bobbie in the upcoming Company revival; keeping an eye on Lenk’s vacation schedule might not be a bad idea.

It’s to Coleman’s credit that she has such robust chemistry with a wry, swaggering Jeremy Kushnier as King Arthur, whose tragic hero character development suffers the most from the book’s revamp. His singing occasionally tended toward crooning, but his acting in an ultimately ungrateful part was rich and varied, his moral judgements tinged with palpable intellect and emotion. The scenes opposite the uninterestingly villainous Mordred, which can slow the show down in its second act as Mordred tries to undo the Round Table, here singed opposite the thrillingly demented Aaron Dalla Villa.

While Guenevere’s spunkiness and Arthur’s chiller affect were welcome variations on familiar characters, Deven Kolluri’s awkward, bumbling take on Lancelot was the concept’s weakest intervention. Not possessed of the gravitas lacking in Arthur, his allure to Guenevere was hard to place and Kolluri’s voice carried generously only across the handful of notes that make up Lancelot’s songs. But even that sort of old-fashioned vocalizing melded uncomfortably with the music which, in uneven new orchestrations for percussion, upright bass, flute, plucked strings, and keys by Matt Hinkley, sounded alternately like a folk mass, a synth-heavy pop album, or a visit to King Arthur’s court by the musicians of the Grand Ole Opry. 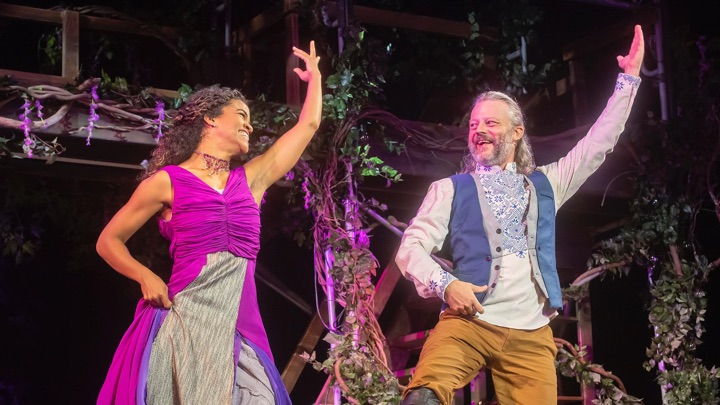 Elsewhere in an ensemble that featured Hope Hamilton, Julie Andrews’s granddaughter, in her professional debut, Kyle Lopez Barisich was a delightful Sir Dinadan and James Harkness impressed as Sir Lionel.

Despite its being billed as a “concert musical under the stars,” I was overjoyed to find the production fully and inventively designed, costumed, and lit (by Andrew Diaz, Meghan O’Beirne, and Mike Billings, respectively)—the first I’ve seen since March 2019—which made intelligent use of a smaller, pop-up playing space in a comfortable, mosquito-free field about five miles away from BST’s space in Sag Harbor.