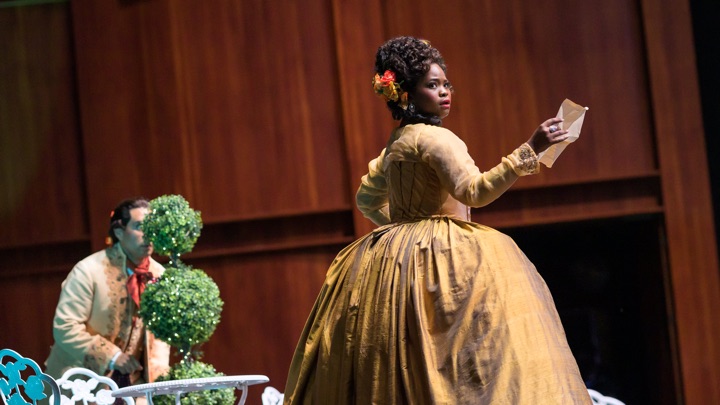 The Met’s unmemorable new Der Fliegende Holländer was not a performance I fondly recalled during months of pandemic-enforced abstinence. However, Friday’s sparkling L’Amant Anonyme at Wolf Trap’s Filene Center proved a refreshing aperitif in the much longed-for return to opera-as-usual in the US.

This tasty two-act morsel of rom-com fluff had been all but forgotten since its premiere in 1780 (not 1870 as Wolf Trap claimed online—no printed programs were distributed at the show). However, increased interest recently in its composer—Joseph Bologne, Chevalier de Saint-Georges—has led to several revivals. Bologne, the Caribbean-born son of a Senegalese slave and her French owner, was a remarkable figure far beyond his accomplishments as a violinist, conductor and composer.

Those interested in his fascinating life shouldn’t wait for the feature film reportedly in the works but instead immediately check out the fine pair of essays by Callum John Blackmore published here a year ago.

Years ago I’d heard Bologne referred to as a composer of violin music, but I had no idea he’d also written operas. L’Amant Anonyme sadly is the only one to have survived complete. Though there’s a 2015 CD from Australia’s Pinchgut Opera, my first exposure to the work occurred when I reviewed the video version produced last fall by the Los Angeles Opera.

While it was a brave early attempt to present opera in rigorously socially-distanced conditions, the often-stilted LA Anonymous Lover failed to convince me that Bologne’s work was more than an intriguing novelty. However, I left my first-ever Wolf Trap visit with an altogether higher opinion of its stage-worthiness.

Conductor Geoffrey McDonald, whose work I’d previously admired in Handel and Paisiello, drew lively, sensitive playing from members of the National Symphony Orchestra. Unfortunately, Bologne’s delicious overture was often nearly inaudible thanks to Kimille Howard’s antic staging. Raucous guffaws resulted from those in the audience very determined to enjoy their first opera in months. During those slapstick hijinks I briefly became nostalgic for the peaceful streaming opera experiences I’d lately been enduring—but not really loving.

But soon the farcical tale of best friends who become lovers despite a misunderstanding precipitated by anonymous love letters began to cast its spell. Howard placed her generally pleasing production downstage in front of McDonald’s orchestra, and her endearing cast mercifully calmed down after the frenetic overture.

As Valcour the misguided epistoler, Ricardo Garcia’s sometimes strenuous tenor sounded as it might be more at home in 19th or 20th century music. Baritone Johnathan McCullough as the foppishly animated Ophémon, though, was more stylishly adept, as was Joseph Leppek as Colin. 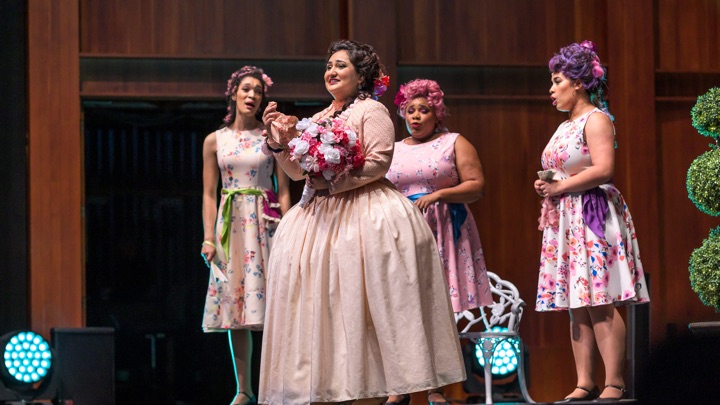 The sopranos, however, were the evening’s standouts. As Jeannette whose wedding to Colin frames the opera’s action, a pert Yanuet Laguna revealed a sweetly piquant voice that made much of her limited music. Chanáe Curtis’s gleaming Léontine rightly dominated the performance. Her conflicted heroine has the lion’s share of music including several grand arias that might have been more suited to an opera seria rather than to an opéra comique. Those scenas suggested Bologne’s apparent impatience with the fluffy scenario devised by Mme. De Genlis.

Curtis boldly handled those demanding showpieces with aplomb; her large, warm soprano, secure throughout its wide expanse, only came to grief in several pinched acuti. A major misfire wasn’t her doing: silly “Glitter and Be Gay’ business she was made to perform distracted from her final aria. I’ll be interested to follow the progress of this promising soprano.

Her big high notes however consistently suffered from the performance’s biggest fault: the grating sound design. While Bologne’s intimate work would have been better served in a smaller venue, the outdoor Filene Center, which can accommodate nearly 7,000 spectators, must of course use considerable amplification. But from the beginning music sung above mezzo forte resulted in harsh distortion and no adjustment was made. This maddening feature did a serious disservice to the audience who heard the talented performers as if through a cheap AM radio.

While ushers were masked, audience members, grouped in pods in every other row, mostly eschewed them, as did those seated on the lawn at the back. The experience of returning to live opera after a long, enforced intermission–even at an entirely new theater—felt less foreign than I’d expected, altogether reassuringly familiar!

L’Amant Anonyme with its swift running time of 80 minutes should now enjoy a long life as half of a double bill, perhaps paired with Mozart’s Der Schauspieldirektor or another late 18th century work, perhaps one by Philidor or Grétry.