I never imagined I’d see such a rote park-and-bark Wagner production created in 2020! 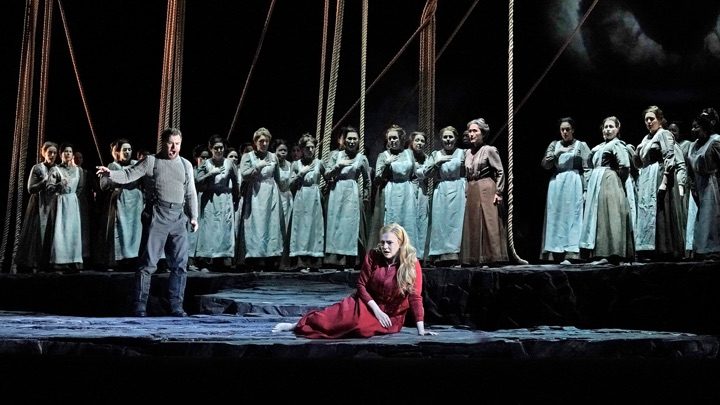 In his interview with Zachary Woolfe in The New York Times, François Girard revealed that he’ll be directing the Met’s long overdue new production of Wagner’s Lohengrin in a future season. Remembering his riveting Parsifal from a few years back, I was excited.

But after Monday’s dark drab dud of a Dutchman, I instead despaired for the Swan Knight and found myself feeling nostalgic for the 30-year-old August Everding Der Fliegende Holländer mounting it replaces. In an era when Wagner productions worldwide have become the standard-bearers for challenging, sometimes outrageous Regietheater, Girard’s blank vision might set a new standard for cheap and retrograde non-Regie. One could label it “idea-free” but there were several novel notions—all unfortunate!

Musically, matters were equally unhappy with a competent if uninspired cast sabotaged by the predictably scattered and stodgy conducting of Valery Gergiev. As is often the case, his head was buried in the score rarely glancing at either his orchestra or the stage. Though his players managed well enough, Wagner’s vibrantly youthful score felt ponderous and lifeless, and even surefire numbers like the striking overture (which was partly obliterated by many minutes of a freakish audio disturbance) or the final act’s rousing opening choruses and dances fell flat.

UPDATE: I’ve been informed that the offending noise emanated from the purse of an audience member and only ceased when someone grabbed the offending accessory and took it out of the auditorium. The hero was then reseated on the parterre level: Bravo!

One might however sympathize with Gergiev for averting his gaze as there was so very little of interest going on in front of him. A friend ventured the evening had been a costumed concert performance with so little Personenregie of the six principals you had to wonder what had gone on during all the weeks of preparation. In fact Kirsten Flagstad and Friedrich Schorr would probably have felt right at home stepping into this black hole. I never imagined I’d see such a rote park-and-bark Wagner production created in 2020!

Stills released before the opening promised some stimulating imagery but that never materialized. The audience was greeted with a grey painted drop depicting an enormous eye which proved to be the Dutchman’s portrait that had so transfixed Senta.

John Macfarlane was credited as the set designer but there were not much in the way of sets at all other than that eye (which resurfaced for Senta’s Ballad) and a projection or two of stormy skies. True, the prow of Daland’s ship cruised on and off a couple times and the women’s chorus fussily “spun” ceiling-to-floor ropes but that was about it for visual excitement. David Finn’s lighting wasn’t very illuminating but that may have been for the best. 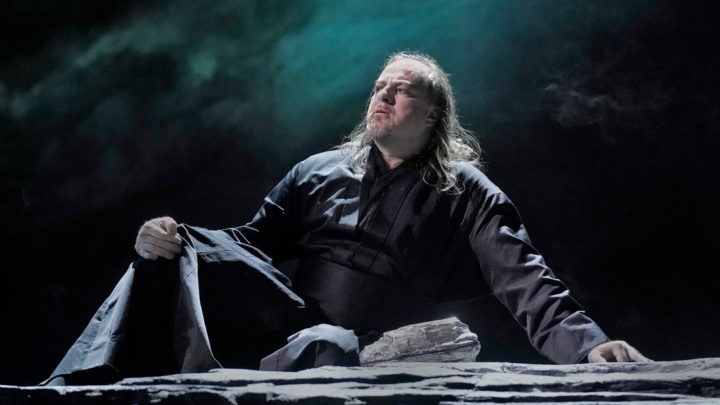 Other than leaving the principals to their own devices and shuffling around the chorus with near-incompetence, Girard appeared most interested in introducing light bulbs into the chunks of gold used by the Dutchman to barter with Daland for Senta’s hand in marriage. This conceit culminated in the baffling image of the hapless maiden sprawled atap a pile of the glowing rocks looking like a confused Freia who’d stumbled into the wrong opera.

He also followed the by-now standard trope of staging the overture introducing a barefoot Senta double (intensely portrayed by dancer Alison Clancy) clad in red who for endless minutes performed Carolyn Choa’s ersatz-Martha Graham undulations. Presumably the restless girl was conjuring the Dutchman and his crew to visit her boring fishing village. On opening night though many were distracted from her gyrations by the noisy buzzing; I imagine it will seem even more risible at later performances when the audience can give her its full attention.

When the standout in a Holländer cast is Erik, you know you’re in trouble. Sergey Skorokhodov’s engaged, full-throated and ardent suitor enlivened his scenes even though he was apparently instructed to make his final plea to the Dress Circle rather than to the distracted Senta. But then the characters rarely ever interacted. As the Dutchman began the wonderful second-act love duet, Senta wandered around the back of the opposite side of the stage paying no attention to him at all. In fact, after their long staring match when they first encounter each other, the lovers never made eye contact until Daland’s return.

The other tenor, a brightly lyrical David Portillo as the Steersman, was the only other fully satisfying principal. While a convincingly stern scold, debuting Mihoko Fujimura’s Mary sound small, thin and old, an “unnecessary import” as they used to say in Opera magazine. Bass Franz-Josef Selig’s standard-issue Daland alternated firmly hearty sounds with disconcertingly wobbly ones.

A last-minute replacement for the injured Bryn Terfel, bass-baritone Evgeny Nikitin did an honorable job as the Dutchman but lacked the commanding star presence to dominate his opera. Though his inky, biting bass-baritone coped well enough with the role’s demands, he appeared more involved with getting out the notes than with shaping them into something interesting or involving. Neither he nor Girard had decided whether the Dutchman was a doomed, wounded Romantic hero or a demonic villain. Stripped of his supernatural origins, the title character became a sad guy who just couldn’t get a date. 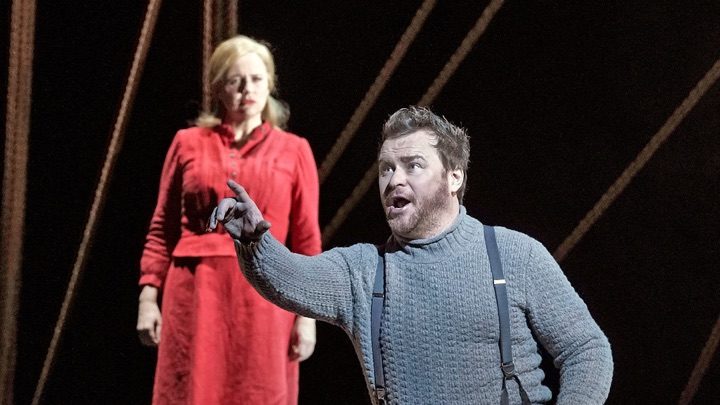 Nikitin’s lack of mystery and allure made Anja Kampe’s job even more difficult. The veteran German soprano also in her Met debut worked diligently but, in the end, fruitlessly to envelope her audience in Senta’s obsession. Her secure, medium-sized soprano isn’t particularly distinctive and years of performing demanding jugendlich-dramatischer roles have left the top unpredictable and effortful, a serious deficit for Senta’s soaring climaxes. Arriving at the Met a good decade too late, she did excel in a gripping Ballad and in some of the more lyrical passages with Erik. Though one usually imagines her character as a young girl, Kampe might have made something compelling of a specifically middle-aged Senta but Girard abstained.

One actually felt sorry for the soprano who for all her hard work was rewarded in the end with the lamest staging imaginable of Senta’s sacrifice. Following her ecstatic vow, Kampe simply strode into the chorus so that someone could briefly lift her up above the crowd. Then she disappeared while the four remaining principals stared blankly at the stormy projection as it slowly turned crimson. Was there a transcendent union or simply a bloody mess?

One can only hope that the upcoming Lohengrin will be a return to form for Girard rather than another botched dead-end like this ghastly capsized Holländer. Anyone still interested might be advised to wait until the final pair of performances on March 24 and 27 when Patrick Furrer rescues the podium after Gergiev jumps ship.