Joseph Bologne, Chevalier de Saint George is frequently referred to as “le Mozart noir.” While surely intended as a favorable comparison to Mozart, the sobriquet is diminishing, implying that Bologne’s music was somehow derivative of Mozart’s. 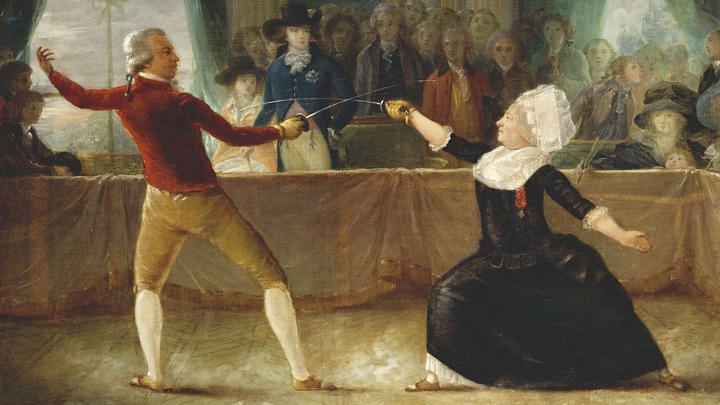 A fencing match arranged by the Prince of Wales between composer Joseph Bologne, Chevalier de Saint George, and the Chevalier d’Éon, a cross-dressing French royalist spy.

This is the second installment in a two-part series on L’Amant anonyme, one of the oldest surviving operas by a Black composer. The first installment traced the story behind this work, following the remarkable career of the opera’s composer, Joseph Bologne, Chevalier de Saint George.

Bologne is frequently referred to as “le Mozart noir” (indeed, this is how Tafelmusik title their album). While surely intended as a favorable comparison to Mozart, the sobriquet is diminishing, implying that Bologne’s music was somehow derivative of Mozart’s. The comparison, however well-meaning, obscures the sparkling originality of Bologne’s writing (captured so strikingly on Tafelmusik’s recording) which set him apart from so many composers of his time.

The opera’s three-movement overture has a broad symphonic sweep, recalling Bologne’s works for the Concert des Amateurs in its stylish, varied orchestral writing (indeed, it was later republished as the composer’s Symphony No. 2).

The first movement is a lively minuet – a dignified courtly dance injected with new vitality and vigor. A rising triple-time melody – leaping upwards in a flurry of violins and bolstered by a buoyant choir of horns and oboes – gives way to a series of lighter, more capricious episodes which almost seem to mock the bombast of the opening.

This dazzling minuet not only helps to set the mood for the story to come, it also situates the drama within the complex world of courtly etiquette, a world that Valcour inadvertently overturns with his unorthodox method of romantic pursuit. Indeed, the glittering, major-key opening soon devolves into a brooding, minor-key episode, with unison strings pummeling out wild, angular phrases, foreshadowing the imbroglio to come.

The third movement is nothing short of a free-wheeling romp. A lively country dance, it forms a more rough-and-ready counterpart to the glossy minuet which opens the overture. Brisk grace notes and sudden leaps in the strings suggest the slipping, sliding, and squeaking of a country fiddler, instantly transporting the listener to the bucolic fantasy-world of the opera.

This intermingling of high and low dances does not end at the overture: country bop and courtly pomp are woven throughout the opera’s score. In the extracts from the ballet music which are also featured on Tafelmusik’s recording, stately contredanses are followed by raucous hoedowns, palace and pasture colliding in a delightfully varied musical landscape. Indeed, the well-heeled aristocrats who would have originally performed this opera, far from being beholden to tradition courtly dances, were just as likely to partake in these low dance styles, eager to create a veneer of pastoral bliss.

However, the musical heart of Bolonge’s opera – sadly not yet recorded – is the quintet which ends the first act, a work of astonishing musical and dramatic complexity. The quintet marries genuine dramatic sentiment with razor-sharp comic precision. Valcour has just attempted to reveal to Léontine that he is her anonymous lover; however, she suffers a series of sustained panic attacks, shocked that her stalker had broken into her home. The pathos is brought about by her acute distress and the comedy comes from Valcour’s ill-effective attempts to comfort her.

The musical style is one of carefully organized chaos: swirling violin figures emulate Léontine’s spinning head, vocal lines engulf one another in a spirited cacophony, and staggering dissonances – dealt out in a wash of Sturm und Drang – resolve to moments of blazing radiance.

It is both tantalizing and tragic to look at this music on the page, unrecorded and rarely performed. Tantalizing because Bologne’s manuscript offers possibilities for sublime aesthetic experiences, moments of operatic bliss that should be performed and recorded for all to hear. And tragic because systemic racism has long barred this music from opera’s most prestigious stages, thereby barring it from our cultural consciousness, constraining it to the private stages of eighteenth-century high society.

Opera has always had a race problem, a problem that we are only just beginning to reckon with. Operas by composers of color are still a rarity on our operatic stages and efforts to rectify this imbalance have been sluggish at best, non-existent at worst.

Yet the life of Joseph Bologne shows that opera has long been bound up with racial politics. His experience as a Black musician navigating the white world of Parisian noblesse was the unique product of France’s colonial project in the Atlantic, its economic reliance on slave labor, and the horrific racial attitudes that governed these enterprises.

Recently, there have been considerable efforts to evince the impact of slavery and colonization on the history of opera, including attempts to unearth the operatic histories of the French Atlantic colonies. Cap-Français and Port-au-Prince in Saint-Domingue (modern-day Haiti) and Basse-Terre in Guadeloupe were home to thriving cultures of operatic performance, with multi-racial companies playing a mix of local works and French imports to a multi-racial audience. New Orleans, too, was home to a number of successful opera companies.

These were major operatic hotspots, rivalling many European cities in their packed performance schedules. And yet we have been slow in recognizing their significance. It has been suggested that these colonial theaters became sites of aesthetic innovation and even political radicalism, able to mount performances that would have been subject to stricter censorship in the metropole – it is even possible that these politically charged Caribbean performances had a considerable impact on operatic culture in Europe.

These are disturbing operatic histories: the number of times the name “Figaro” appears in escaped slave adverts is a grim testament to how deeply our most beloved operatic staples were bound up with the history of slavery.

Take the front page of this 1784 issue of the French-Atlantic colonial newspaper Les Affiches américaines. The right column consists of a list of fugitives from slavery who were captured in the French Antilles; these advertisements were placed in the press so that the plantation owners who originally enslaved these maroons could force them back into slavery.

Midway through the second paragraph, we see that a slave named Figaro – branded on his chest with the name of his owner (most probably Nicolas-Agnès-François Denord, Chevalier de Saint-Louis) – was captured on the 28th of August in Petite Anse, a small community just outside of the city of Cap-Français (modern-day Cap-Haïtien) in Saint-Domingue; he is being held in the Cap-Français prison. 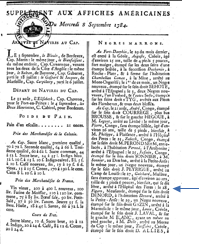 On the second page of this same issue, another advertisement plugs a performance of Grétry’s opéra comique, Le jugement de Midas, at the opera house in Cap-Français, a benefit concert for the company’s music director. 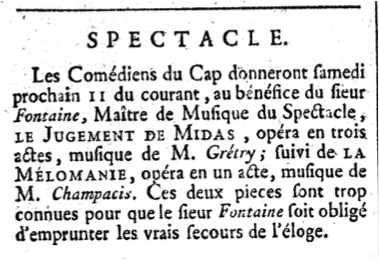 Examining a map of Cap-Français from 1789, it becomes clear that Figaro was being held prisoner (point ?) just five blocks away from the opera house (point ?).

As the interracial company of the Cap-Français theater rehearsed Grétry’s opera, Figaro was locked in a cell a mere ten minutes’ walk away, awaiting his return to slavery. And, less than two years later, Mozart and Da Ponte would turn to Beaumarchais’s La folle journée ou le mariage de Figaro as inspiration for a new opera at Vienna’s Burgtheater, just as Figaro’s enslaver had turned to Beaumarchais’s play to name his captive.

We don’t often think of Le nozze di Figaro or Le jugement de Midas as being implicated in the history of slavery and colonialism – indeed, listening to them today, their music may even seem timeless, divorced from the weight of history. Yet, this issue of Affiches américaines serves as a somber reminder that opera has long been a central facet of the most despicable branches of white supremacy. The enslaved Figaro, whose story remains tragically untold, is as much a part of the history of opera as Mozart or Grétry, and opera, as the premier artform of Europe’s colonial powers, is entirely culpable in his enslavement.

It is clear that, in order to better acknowledge and address opera’s role in these racist enterprises, we must turn our historical attention away from the iconic institutions which have previously defined operatic history and onto the rarely acknowledged margins of musical culture. We only come across the operas of Joseph Bologne, for example, when we explore the scarcely acknowledged history of domestic opera performance in France (salon performance, of course, has long been an overlooked site of women’s creativity too).

The canonical works that we regularly hear in the opera house today – and the genres to which they belong – are indelibly tied to official institutions which have long functioned as racial gatekeepers. The Opéra would go on to premiere such iconic works as Don Carlos and Thaïs, lending them legitimacy and a place in the operatic pantheon. Meanwhile music history has all but left the operas of Bologne behind.

The life of Joseph Bologne shows that gatekeeping at these official institutions – which functioned to exclude the works of women and people of color – has long obscured the rich diversity of operatic history. Bologne’s failed bid for the Opéra directorship is just one instance in which institutional racism has had long-term cultural ramifications.

We can only imagine how the course of operatic history might have been changed had Bologne been allowed to take up his appointment at the Opéra in 1776. Perhaps he would have reinvigorated the institution after Gluck’s return to Vienna, lifting it out of its financial peril (and artistic lull) in the 1780s. Perhaps Bologne’s operas might have outstripped those of Gluck and Rameau as the most iconic French works of the eighteenth century. And perhaps they might have earnt their place in the repertoire of today’s opera houses, performed alongside those of Mozart, Puccini, and Verdi.

Now is the time to dismantle these institutional biases.

This last week, many opera companies posted in support of the Black Lives Matter movement. Many of these companies (the Met, for instance) have never performed an opera by a Black composer.

It is time for these institutions to put their money where their mouth is. On the one hand, they must acknowledge that opera has historically been imbricated in, and benefitted from, slavery, colonialism, and other forms of white supremacy. They must acknowledge that opera’s official institutions have long acted as gatekeepers, actively suppressing the works of Black composers.

On the other hand, they must acknowledge the long and vibrant history of Black opera, the unsung contributions to the artform by Black composers which stretch back well into the eighteenth century. They must acknowledge the importance works like L’Amant anonyme, even though they have historically been banished to the margins of operatic culture.

And above all, they must perform works by Black composers, bringing operas like L’Amant anonyme back onto the official stages. They must show that works like this matter, affording them the same talent and resources that they would put towards Tosca or Tannhäuser.

Because operas by Black composers matter. L’Amant anonyme matters. These works must not sit on the dusty shelves of some archive, unsung in every sense of the word.

Now, more than ever, they must be heard.