One by one, we see the principals arriving at the eerily empty building. Something about watching them—masked and in street clothes, struggling with umbrellas—was almost unbearably emotional for me. 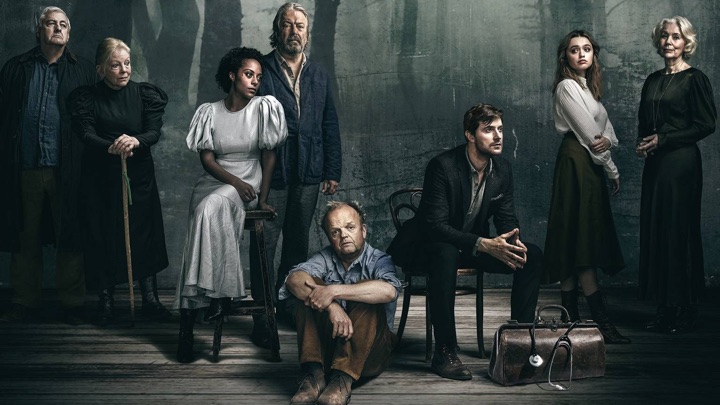 David Fox: Well, Cameron—I don’t usually start to tear up before the curtain rises on a Chekhov play, but today I did. In the preamble to this filmed version of Uncle Vanya, a supertitle tells us matter-of-factly that on March 16, 2020, the cast was sent home from the Pinter Theatre in London’s West End, due to the pandemic, of course. (The production, directed by Ian Rickson, had opened to rave reviews just six weeks before.) Months later, the cast was allowed to return to an empty theater to record it on film. One by one, we see the principals arriving at the eerily empty building. Something about watching them—masked and in street clothes, struggling with umbrellas—was almost unbearably emotional for me. If you know Vanya, you likely will have already intuited the poignant resonance here to the play itself, which is set in a summer house, long in disrepair and largely ignored by its owner, as it comes back to a new life of uncertainty. The video gives us a wonderful opening to a wonderful show—not only the best Vanya I’ve ever seen, but among the most cohesive and convincing of any Chekhov production in my experience.

Cameron Kelsall: It’s an almost unforgivable cliché for a critic to say that something speaks to the current moment—especially if it was written by Shakespeare or a long-dead Russian—but really, I struggle to think of a work that so seamlessly grapples with the emotions we’ve been feeling over the last 12 months, that allows for confrontation and catharsis but doesn’t actually reference the ongoing crisis at hand. I agree that on its own merits, this stands among the finest assumptions of Vanya on the English-speaking stage, and it should dispel the long-held idea that British artists are not adept at Chekhov. This is a fallacy frequently disproven, but really given the hook here. Almost to a person, every actor is as good as any I’ve encountered in these roles, and in some cases, the absolute best. (More on that shortly.) Rickson and Conor McPherson, acting as adaptor, have captured the humor and heartbreak of this play as very few can, including to show how often they co-exist. This is a must-see, and an overwhelming experience.

DF: Like you, I’m somewhat resistant to British Chekhov, though I’ve seen quite a lot of it, and with very distinguished actors, often giving fine individual performances. I think what has put me off sometimes is the sense that—even when the names and specific details of the play are set in Russia, as of course Chekhov wrote—the feeling I take away is that the world we’re watching is very much overlayed by a British take on social class and cultural understanding. That was not at all the case here—the accents were notably from the U. K. (though a wide variety), but I had no trouble feeling that the Russian milieu was a natural fit.

CK: Interestingly, the two best productions of this play I’ve seen—this being one of them—originated in London. (The other, from about 20 years ago, featured Simon Russell Beale, Emily Watson, Mark Strong and the tragically departed Helen McCrory, all phenomenal.) There is an element here, from the first moment, of just diving into the play and doing it justice, and it caused me to focus on some elements that might usually be overlooked.

DF: Reading that extraordinary cast puts me in mind of a paradox I often think of in Chekhov productions. The plethora of great roles warrants—and often gets—a company full of big names. But “All Star Chekhov,” as I think of it, works against the fundamental notions of family and community that’s at the heart of all these plays. Here again, this Vanya finds the perfect balance. Above all, everyone here seems to be living in the same world. That said, there are so many treasurable individual performances, I don’t know where to start.

CK: I don’t think I’ve ever seen Serebryakov portrayed so sympathetically—less a pompous cosmopolitan slumming it in the country than a rapidly aging man, his sole point of living wrested from him, barely concealing the fear of his waning mortality. (Roger Allam, who stood in for Ciaran Hinds, is superb in the role. Every moment feels completely fresh.)

DF: I feel greatly privileged to have seen Allam—a fabulous actor—many times in the West End. Somehow his career has never really crossed the pond. Watching him here in Vanya makes me wish that he would do more theater here.

CK: Another aspect that fascinated me was the relationship between Vanya and his mother, and how the strain might be related to her dashed hopes for his potential as an intellectual. Dearhbla Molloy, another always-welcome presence, plays the role as a pompous Francophile—she’s delightfully over the top at first, but her performance gains an unforced, tragic quality as more and more uncertainty creeps into the drama.

DF: Molloy is as good here as she was in The Ferryman, where she was also completely different. As you say, she made something quite delightful and unexpected of a role I generally think is one of the least interesting principals in Chekhov. Molloy especially embodies for me one of the strongest aspects here. The first time I saw a professional production of Vanya, my takeaway was that it was the ultimate Country Weekend from Hell play—that literally everyone was someone I’d cross the street to avoid. (In fact, I thought it was the obvious precursor to Noël Coward’s Hay Fever.) Here, they all have their quirks for sure, but there’s something redeemable and even charismatic and likeable in each of them.

CK: Indeed—and especially Vanya himself, wonderfully captured by Toby Jones, neither sad-sack, lovesick country poet or off-kilter eccentric, as I’ve seen the character played in various past productions. I think Jones beautifully communicates Vanya’s befuddlement at the misfortune of his life. On Twitter recently, someone jokingly mocked the Chekhovian tendency to declaratively bemoan how little they’ve accomplished, and that observation did make me laugh. But when Jones’ Vanya opined that he was 47 years old and had nothing to show for it, you felt only deep sorrow.

DF: Sorrow, yes—but in some ways, I think the triumph of McPherson’s adaptation is how funny it is. Sometimes it seems almost to wink at our expectations of Chekhov, as when Vanya says, “Everything’s the same as ever, except worse.” Or when he replies to Yelena’s comment that she feels “completely dead,” with “Well, that’s not good.” (Jones is masterfully tart here.)

CK: I would say that Rosalind Eleazar (Yelena) and Aimee Lou Wood (Sonya) both fall into the category of near-ideal, and I struggle to think of a time when they’re intricate relationship, tense yet knowing, has been portrayed so authentically. Perhaps it’s because they’re both on the younger side and seem like they could have had a more sisterly bond. I also appreciated that Eleazar avoided the trap of playing Yelena as a sullen glamour girl; she really convinced me of her love for her much-older husband, and that she entered the marriage with pure, if someone naive, intentions.

DF: I don’t think I’d ever seen either before—and Eleazar I didn’t even know as a name—but I’ll certainly seek her out in the future. Another actress here whose work I do know is Anna Calder Marshall. For a brief moment decades ago, American film stardom seemed to be in her future—she played Cathy in a big-budget 1970 film of Wuthering Heights. It didn’t work out that way, but she’s a marvelous character actress now: superb and deeply touching here as Marina.

CK: Last but not least among the performers, Richard Armitage is also really superb as Dr. Astrov. In another example of aspects of the play I often overlooked but seemed perfectly integrated here, that character’s passion for conservation of the natural world felt fully realized. Talk about another urgent contemporary issue presaged by Chekhov!

DF: Yes, that’s really an astonishingly prescient aspect of this play, and McPherson points it up brilliantly. Two other elements I’d like to mention in this production: one is the set by Rae Smith (beautifully lit here by Bruno Poet), which is exactly the right balance between grandeur and shabbiness. The other is a superbly acted drunk scene—I’d never really thought of this before, but surely we’re meant to see many Chekhov characters get more and more sloshed in their long evening conversations. This Vanya gets that in a way I’d never seen before.

CK: Throughout the pandemic, I’ll admit I’ve struggled to feel fully connected to streaming theater, as the distance between the proceedings and myself just reinforced the isolation of this time. That’s something that Chekhov characters know a thing or two about—feeling cut off from a person, or place, they dearly love. But this Vanya had the opposite effect: It totally recharged my battery, and made me eager for the days, and plays, ahead.