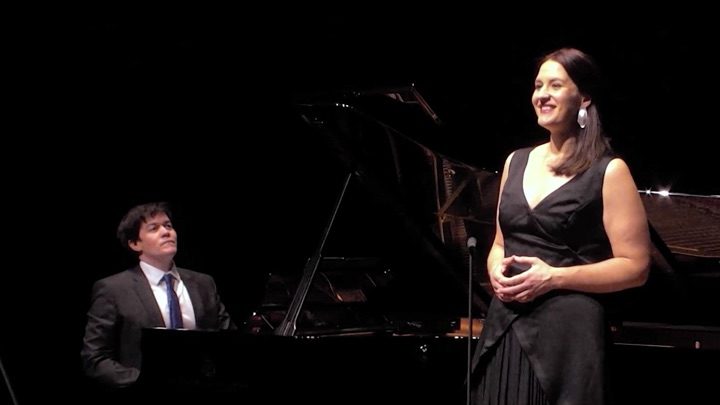 This evocative and intimate program, composed entirely of miniatures by Brahms, Schumann, Sibelius, Grieg, and Strauss, offers a glimpse into the soprano’s passion for recreating these textually rich musical portraits with a vocal painter’s attention to detail. Accompanied by the brilliant South African pianist James Baillieu, both deliver a concert as deserving of attention as the showstopper they gave for the Met Stars Live in Concert series in August 2020.

Although Davidsen’s ample gifts have impressed the opera world for its luminous, once-in-a-generation qualities, it is refreshing to hear her voice scaled down to a medium that draws a more striking palette of colors that are at times lost in the grandeur of the stage. Indeed, for many of the Strauss songs in this recital that Davidsen often performs with an orchestra, the artist here reveals greater depth with hairpin turns in dynamics and gradations of color and mood.

Davidsen and Baillieu streamed this concert from London’s Guildhall School of Music instead of its usual setting at the Kennedy Center’s Terrace Theater—a necessary stopgap given the current state of the pandemic. Although the virtual format eliminates that familiar element of audience interaction, there are other aspects to this unique presentation that draw the viewer into the inner world of these songs.

Davidsen partitions her program into five composers whose writings are consonant to the strengths of her pure, but rich dramatic instrument. At the beginning of each cycle, the soloist engages the listener with a spoken introduction that dispenses more detail than what is normally found in an average lieder recital. This informative bit—often relegated to the program notes—not only settles the audience for the next work of music, but also personalizes the concert and transitions the artist intellectually and emotionally within the composer’s landscape.

The soprano’s finest work in this concert is Sibelius’ Luonnotar, which emerged here as a truly epic narrative performed by a grand instrument that appears to have been forged in Norway’s fjords. This technically fiendish tone poem poses few challenges for Davidsen’s secure technique. The soprano not only wends her way through the treacherous leaps with ease, but also captures so much nuances of color and volume at its taxingly high tessitura. Her theatrical bent is also in full display, conveying the mythical qualities of the Kalevala’s text in such an engrossing manner that one almost forgets the absence of an orchestra.

Other pieces that stood out were selections from Sibelius’ Five Songs Op. 37, Grieg’s Sechs Lieder, Op. 48, and the collection of Brahms pieces that began the recital. The soprano’s familiarity with the Swedish language and the exceptional, varied qualities of her soft singing bring out so much of the beauty in Sibelius’ writing, with her most notable work emerging in Soluppga?ng and Var det en dro?m? Her love for Grieg’s music is also evident in the lieder she handpicked for this section, with her marrying her voice’s broad expressive qualities to the composer’s amorous German poems.

Outside of these Northern European works, Davidsen’s unique instrument displays its many great strengths in the five Brahms pieces that hail from different stages of his life. The composer’s more serious and Romantic vocal writing provides an ideal foil for the richly textured center of Davidsen’s instrument, with her summoning mezzo colorations that paired beautifully with Liebestreu and Mädchenlied. If her textual interpretation may not emerge with the specificity that one finds in a paragon of this repertory like Christa Ludwig, there is much about Davidsen’s approach to crafting these Lieder that suggests that she will continue being an important artist for this art form.

While I wasn’t particularly taken by Schumann’s Poems to Queen Mary Stuart, that is less a commentary on Davidsen’s beautiful rendition of the queen’s farewell and final prayer and more an admission of my lack of enthusiasm for the composer’s songs. Closing out the concert were familiar pieces from Strauss—a composer with whom Davidsen has established a strong rapport both in the concert hall and the opera house. If many of these pieces were previously featured in her debut album and the Met Stars Live in Concert Series, Davidsen’s more relaxed demeanor in this concert allowed her to draw more variety from the text, most notably in a charming, girlish piano-soloist rendition of “Cäcilie.”

Davidsen closes the concert with a message thanking viewers for their support and welcoming them to join her again when the world reopens. With the emergence of multiple efficacious vaccines and the leadership of an administration that has observes sound public health policies, there appears to be a light at the end of the tunnel guiding us to our rituals of consuming art again. Until then, please wear a mask religiously, get your vaccine when available, and stay safe.