Lise Davidsen turned in a fine performance Saturday, cementing her up-and-coming star status in an eclectic program given from the Oscarshall Palace in Oslo. 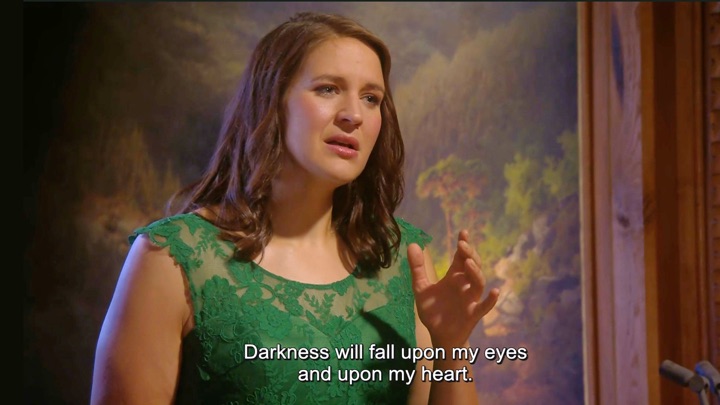 The Met’s comparatively vast resources and experience with livestreaming operatic voices made this an enjoyable afternoon. The mixing and balance were excellent throughout, even on this reviewer’s vaguely crappy TV speakers.

Davidsen herself has a lovely screen presence: a little awkward, but brimming with honesty and humility. Christine Goerke was an appropriately unobtrusive host with enough warmth to smooth over the weirdness of the whole situation: watching Davidsen sing to an empty room (intercut with awkward interviews between her and the Queen of Norway) while I was eating a Trader Joe’s burrito on my couch and ignoring the sound of my currently-quarantining roommates washing three days’ worth of dishes is…. not the same as going to the Met, to provide the understatement of the week.

Pianist James Baillieu, clad in a tuxedo with very fetching striped socks, was a perfect match for Davidsen, the balance between them so fine-tuned that at moments I felt as if the accompaniment was springing straight from Davidsen’s mind.

Davidsen started with arias from Tannhäuser, a piece which helped to launch her career. I am a big fan of Davidsen’s, and the Wagner only confirmed this. She has a massive voice, but there was a lightness to her approach (in part because she wasn’t competing with an orchestra and was singing into a mic) that I find refreshing, and her immaculate dynamic control brought out a welcome sense of shading and contrast.

“Dich, teure Halle” was ringing and bell-like, perfectly approached in the voice with great warmth as well as a glittering finish. During the first break, an excerpt of her performance of “Dich, teure Halle” from the Queen Sonja International Music Competition in 2015 was played, a fascinating side-by-side of how Davidsen’s voice has developed over the last five years.

I generally find piano reductions of Wagner a bit goofy, often running into compression problems (to borrow a tech term) and ultimately rendering Wagner’s vast timbral palette a tad washed-out and muddy. Baillieu is to be complimented, however, for squeezing every precious drop of shading and texture from the arrangement of “Dich, teure Halle.” “Allmächt’ge Jungfrau” fared better, with a more static accompaniment that brought out the subtleties of Baillieu’s playing. Davidsen shone in this aria, her voice like dark chocolate: deep, sweet, and rounded with a luscious bitter edge.

However, the real stars of the program were the songs by Grieg and Sibelius, which were stunning and utterly effortless in Davidsen’s voice. As with the Wagner, she brought a refreshing weightlessness without losing her rich color. “En Svane” was my favorite of the Grieg set, with its subtle crunchy dissonances, and Davidsen brought an attractive bittersweetness coupled with unaffected delivery. I love hearing bigger voices like Davidsen’s sing song literature; for her, it showed her dramatic capabilities along with presenting a soft side to her voice.

My only complaint, really, was with the program, which I found bizarre and somewhat incoherent, despite liking almost every piece individually. It was rather long and arranged chronologically, instead of grouped by theme or even nationality, with the exception that all of the English-language pieces were at the end.

The Italian arias stuck out, both in their placement and in Davidsen’s voice. Verdi’s “Morrò, ma prima ingrazia” was sandwiched in between Greig and Sibelius, a meatball smashed between Wasa crispbread, while Puccini’s “Sola, perduta, abbandonata” wandered aimlessly between Strauss’s “Morgen” and “Heia, heia, in den Bergen ist mein Heimatland” from Die Csárdásfürstin.

Davidsen took on a darker timbre in the Italian repertoire, losing the sparkling top-spin that balances her voice and gives it her intriguing chiaroscuro. This was a beautiful voice, don’t get me wrong, but it didn’t work for me in the context of the recital as a whole. Verdian melodrama simply did not fit in between the nuanced, crystalline beauty of her voice in the Greig (which was superb) and the soft warmth of the Sibelius, where she and Baillieu were at their most sensitive (Baillieu’s piano took on a kaleidoscopic array of colors, Davidsen displayed some astounding pianissimos).

The prickly irony and sly virtuosity of Britten’s “Johnny” melted into mushy sentimentality with Landon Ronald’s “Oh lovely night,” which I found the least compelling piece on the program, and the vastly over-played Ernest Charles’s “When I have sung my songs to you.” It’s unclear to me whether Davidsen picked every piece herself, or if the Met folks made requests or asked her to choose more pieces to increase the length (maybe my commenters can set me straight on this point), so I can’t lay this entirely at her feet, but it made the recital feel somewhat haphazard in its construction.

Of the second half of the concert, my favorite was Britten’s “Johnny,” a cabaret song from 1937 which displayed a completely new facet of Davidsen, including a delightfully sultry chest voice and not-insignificant comic chops. She was clearly enjoying every moment of it, getting to poke fun at opera singing in general and reveling in Auden’s wonderful ambivalent lyrics about a lover who “frowned like thunder.” It’s a great piece, and Davidsen sang it with aplomb.

She ended the recital with “I could have danced all night,” quite a departure from the Wagner that started us off. It may not have suited her voice perfectly, but she had so charmed us all by this point that I didn’t care. Dishes now done, everyone in the apartment sang along with her.