As I don’t need to remind you, we are fast approaching the one-year anniversary of COVID quarantine—and for the arts, it remains a scenario of giveth and taketh away. 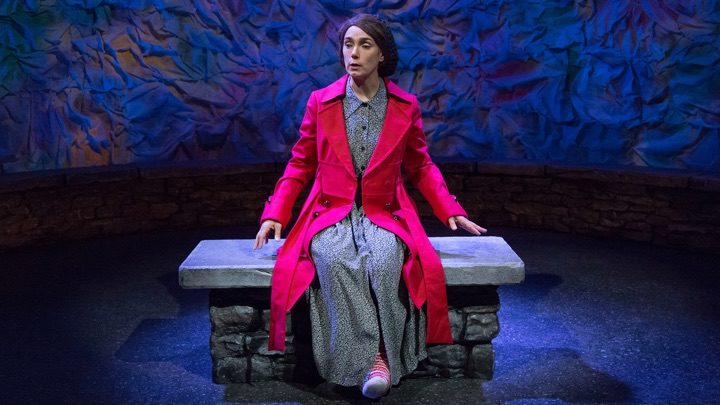 I think we’d all sadly agree that the latter greatly outweighs the former. But the last year has also shown us that there are some positive outcomes… and today, I find myself focusing on them.

What brings about my uncharacteristically Pollyanna-ish mood? I’m watching a streaming production from the Lantern Theater, one Philly’s strongest local companies. Over the last 25-plus years, they have forged a specialty in British and Irish plays across the historical spectrum—Shakespeare of course, but also Harold Pinter, Tom Stoppard, David Hare, and Martin McDonagh. I particularly remember a superlative version of The Lonesome West, which was as good as any American production of McDonagh I’ve seen, including on Broadway.

On this snowy afternoon, I’m transfixed by their current video production of another Irish play, Molly Sweeney, by Brian Friel. It’s a chamber piece, consisting entirely of related storytelling monologues by three characters (one female, two males) that are by turns heartrending, whimsical, wryly amusing, and poignant.

The individual threads ultimately do form a cohesive and gripping narrative. But I’m not going to say much more than that—both because I hope you’ll support the theater by watching for yourselves (Molly Sweeney can be streamed through February 14th; tickets are $20 per household) because the pleasures of the piece should be experienced on your own.

For me, the greatest of those rewards is the chance to share Philadelphia’s theater world beyond the city limits. Though we are not an arts community that rivals New York or Los Angeles in size, I’ve long held that our best artists—especially actors—are as good as those anywhere.

Molly Sweeney is an actor’s play—and the group you’ll see here include some of my favorites. Let me tell you a bit about them.

Anthony Lawton (Mr. Rice). For nearly three decades, Tony has graced Philadelphia stages in the widest imaginable variety of roles—transforming from an impish young leading man into a richly imaginative character actor. He’s known also for his work as a playwright and adapter, including riveting mono-drama works based on C. S. Lewis and others, that he himself performs. A couple of years ago, also for Lantern theater, he did a unique, shattering adaptation of A Christmas Carol. I hope you will all have a chance to see that, in person or on film, in the future. I’ve never experienced a version of that most famous and often-reinterpreted tale that touched me more deeply.

Ian Merrill Peakes (Frank Sweeney). Peakes’ distinguished career includes productions at the Folger Theatre in Washington, D.C., and the Chicago Shakespeare Theatre, among many others. Shakespeare is a particular focus for this actor—but like Anthony Lawton, he has displayed considerable range. I’ve especially enjoyed him in high-style comedy, including Peter and the Starcatcher, where his Black Stache eclipsed all others for me. Philadelphia is a particular center for him, and I sometimes wonder if he and Tony Lawton are often up for the same roles. How nice that here we get to see them together.

Genevieve Perrier (Molly Sweeney). At the risk of sounding objectivist and sexist—to see Perrier on stage is to be gobsmacked by her exquisiteness. She looks like an 18th century porcelain figure, perfect in every detail. This involves more than just her physicality, and it’s a quality that she’s used in marvelous performances in The Lady from the Sea, Private Lives, and others. But I find her most intriguing and appealing when she plays against type—showing fierce intelligence, for example, in Photograph 51 at the Lantern some years ago. She was also hilarious as Edith in The Women for another fine Philadelphia company, EgoPo Classic Theater. She’s similarly out-of-the-box and terrific here.

What else can I add? Molly Sweeney is pretty much ideally served by the streaming format. I’ve seen the play onstage also, but the intimacy provided here through film close-ups really helps us feel the sense of connection. Lantern’s impressive production is directed with subtle authority by Peter DeLaurier, another excellent local actor.

Let me introduce you to the world of Philadelphia theater.  You’ll be impressed, I promise.