I’ve said it before, and I’ll say it again: nobody hits rock bottom like Susan Hayward. 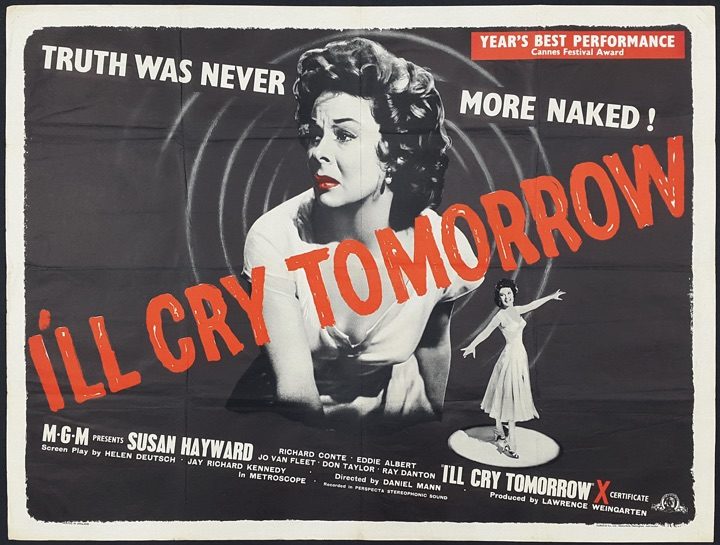 David Fox: Cameron, as you know, this particular project felt like it had a special augury from the often-surprising world of Facebook. In November 2020, at just the point we began discussing pairing these two famous films, the FB Susan Hayward Fanclub—of which I am, of course, a member (note to readers: you should be too; the photos alone are worth it!)—featured a post from no less than Tim Barker, Hayward’s son! It included a wonderful candid photo, along with his clearly loving description: “My Mom at her home… around 1966… Cigarette in hand and Jack Daniels Black Label in the glass beside her…” There are many intriguing similarities (as well as some considerable differences) in Smash-Up: The Story of a Woman, and I’ll Cry Tomorrow. Both star Hayward playing female chanteuses; both also feature Eddie Albert; and of course, both are fundamentally about alcoholism and recovery. But what really attracted us was Hayward’s searing, almost shockingly unsparing central performances, which earned her two of her five Academy Award nominations. And indeed, she’s a wonder to watch in both movies—by turns defiant, angry, maudlin, repentant, hopeful, and everything in between. I’ve said it before, and I’ll say it again: nobody hits rock bottom like Susan Hayward. 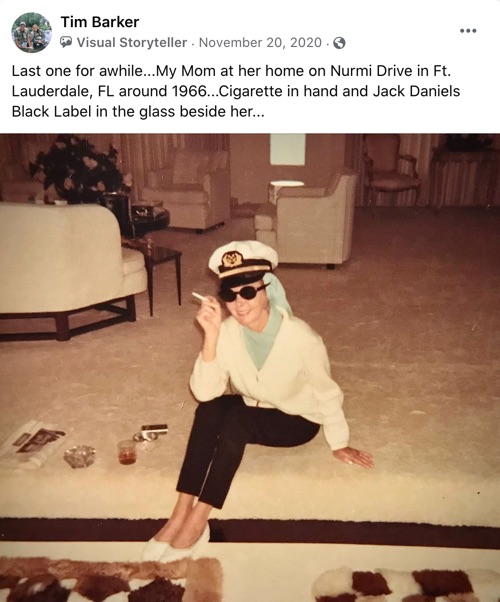 Cameron Kelsall: Hayward, of course, would win an Oscar on her fifth try, for I Want to Live!—which we’ve already discussed. And in many ways, it’s not surprising. Her performance there is big and showy, and it’s Oscar-bait material of both the weepy and politically minded kind. But I’d venture that she does her best work ever in these two films—especially Smash-Up, which strikes me as a surprisingly nuanced exploration of alcohol disorder, particularly from a woman’s perspective. Anyone who might peg Hayward as a second-rate actor needs to watch these movies and consider her layered, complicated performances. And honestly, the fact she lost the Oscar to Loretta Young for The Farmer’s Daughter is, frankly, a load of horseshit.

David Fox: One thing I think both movies share is an odd mix of genres. In Smash-Up, the initial set up and much of the early part of the movie suggest a quintessential woman’s melodrama, and for a non-musical, there are a surprising number of song performances in it (Lee Bowman, the charisma-free leading man, did his own singing; Hayward is dubbed here by Peg LaCentra). But interestingly, the movie tips its hat at the very beginning, with Hayward’s character, Angelica Evans, taking a drink to steady her nerves. By the midpoint of the movie, it has become a quite powerful exploration of the devastating effects of alcohol on individuals and relationships, and as you say, screenwriter John Howard Lawson (who based this on material by several other writers, including Dorothy Parker) shows considerable insight and compassion.

CK: What particularly intrigues me is that Angelica’s drinking problem is rooted in her lack of satisfaction as simply a wife and mother, which goes against the 1940s grain of domestic tranquility as a woman’s highest achievement. Yes, Lawson and director Stuart Heisler show her sneaking a shot in one of the opening scenes, but her alcoholism doesn’t escalate until she’s been relegated to the sidelines as her husband’s career in radio skyrockets. And it’s presented with complexity—at first, Angelica seems to be willingly embracing her role as her husband’s supportive partner, until she finds that she cannot deal with the jealousy and lack of momentum that come along with it. She turns to drinking to fill a void in her life, and the film doesn’t treat that as a moral failing. For 1947, that’s notable.

DF: That’s an excellent point, Cameron—and I also love that alcoholism is explained to her (and us) by a medical doctor character with a noticeable Viennese accent. I feel like the 1940s was really the era of discovery of Freud for most Americans. And here, it also emphasizes what must have been a surprising revelation to many—the idea that alcoholism was in fact, a treatable illness.

CK: Indeed—and I think it does so with more depth than I’ll Cry Tomorrow. (More on that shortly.) In addition to Hayward, we should mention a few wonderful supporting performances—especially Marsha Hunt, who’s still alive and kicking at 103. With Olivia de Havilland’s passing last year, she must surely be one of the last surviving starlets of the era. Eddie Albert is also terrific as a sympathetic friend, a very different role from the one he takes on in I’ll Cry Tomorrow. 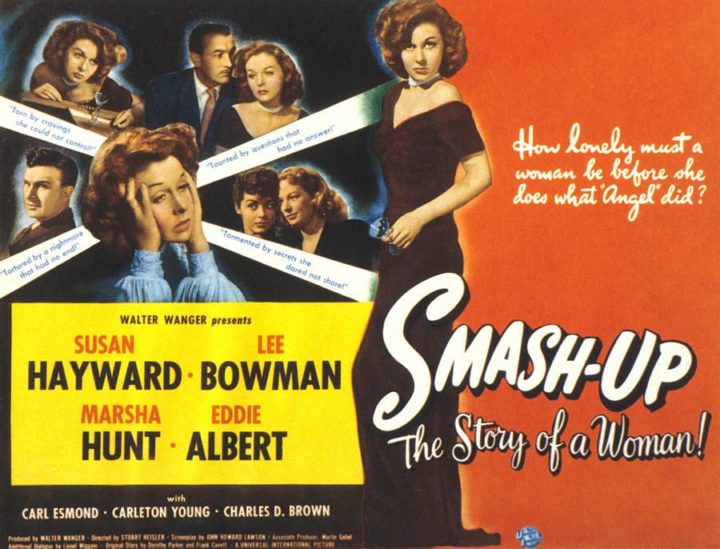 DF: I agree entirely about both of them. Hunt’s character is particularly interesting in that she turns out to be quite a bit more nuanced than she initially appears. There is a famous camp moment where she and Hayward slug it out in a powder room—which of course resonates later in Valley of the Dolls—but by and large, camp is not a significant note in Smash-Up, though the over-the-top advertising poste art might lead you to believe otherwise. I did entertain myself by imagining on-set conversations among the four top-billed actors here. Hayward and Bowman were famous Republicans, while Albert and Hunt were celebrated lefties, whose notable opposition a few years later to McCarthyism did them proud.

CK: Angelica Evans gets a happy ending in Smash-Up, and so does Lillian Roth in I’ll Cry Tomorrow. (And of course, so do we—if the real Roth hadn’t gotten sober, we wouldn’t have her in 70, Girls, 70!) I do think, though, that I’ll Cry Tomorrow is somewhat lugubrious, despite Hayward’s fine performance, and a real star turn from Jo Van Fleet as her overbearing stage mother. Not unlike positioning her as James Dean’s mother in East of Eden, Van Fleet is barely older than Hayward, yet she seems naturally inclined to playing the controlling, manipulative mother from Hell, who thinks she’s acting in her child’s best interests when she’s really ruining her for life.

DF: Before we get started on the great Jo Van Fleet—never better than she is here—I’d like to point out that if Smash-Up is a bit of a genre hodge-podge, then I’ll Cry Tomorrow is virtually two entirely different movies merged into one rather odd whole. The first 20 minutes is essentially Gypsy without music—little Lillian (played appealingly here by child actress Carole Ann Campbell) is an amalgam of Louise (not pretty enough) and June (but she is a vaudeville star) and Van Fleet is Rose. Then suddenly, after a tragically aborted love affair, the adult Lillian literally takes command of the narrative. Hayward’s startling voiceover is an intermittent feature from here on; and more importantly, suddenly we’re immersed in the world of gritty realism that director Daniel Mann had captured so superbly in Come Back, Little Sheba.

CK: The lack of romanticism toward alcohol dependency is striking, and it’s put across compellingly by Hayward’s Roth and those who function as her enablers. I do think the film descends a bit shallowly into platitudinous Alcoholics Anonymous rhetoric in its final act, but that doesn’t entirely erase the genuinely captivating and uncomfortable portrayal of Roth as she reaches the depths. Speaking of the Gypsy connection, a confrontational scene between Hayward and Van Fleet has echoes of the final blowout between Rose and Louise, right down to Van Fleet’s slighted mother all but bellowing that she was born too soon and started too late. Really, Van Fleet is marvelous here, right down to the hint of a Mitteleuropa accent and a face that seems to age decades in the blink of an eye. Had she not won her Oscar for East of Eden, she could have been a contender for this performance. And it’s worth noting that in her first year in films, she made both those movies and The Rose Tattoo. Quite the introduction! 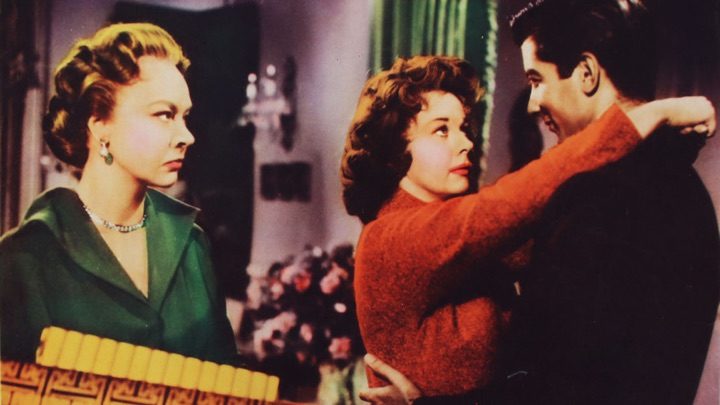 DF: The Rose Tattoo also earned Anna Magnani a much deserved Oscar—though again, I think without that particularly high-stakes competition, Hayward would have won for I’ll Cry Tomorrow. For me, it’s her finest film performance, one that really takes advantage of the size and scale of her acting. Huge fan that I am, I will acknowledge that Hayward is not always a master of nuance—there’s almost always something grandly oversized about her. Here, that’s exactly what’s needed. It’s riveting in the fierce and unglamorous way she allows herself to look and behave—this is drinking at its ugliest. And it’s equally interesting in the way that she delivers the incidental songs. Roth herself was, of course, a vaudeville singing star. In I’ll Cry Tomorrow, Hayward is ostensibly doing her own singing. I have suspicions I can’t actually verify that there is some sweetening going on in a couple of the numbers, but there’s no doubt that she does indeed actually does a lot of her own singing—with such a sense of confidence and swagger that you might indeed believe her as a Broadway musical star.

CK: In both roles, she is painfully believable, which enhances the pathos for sure. And speaking of The Rose Tattoo, that’s where we plan to head with our next piece. Since Anna Magnani and Jo Van Fleet are both favorites of ours, we hope to explore their filmographies—neither particularly expansive, but both compelling—in the coming weeks.