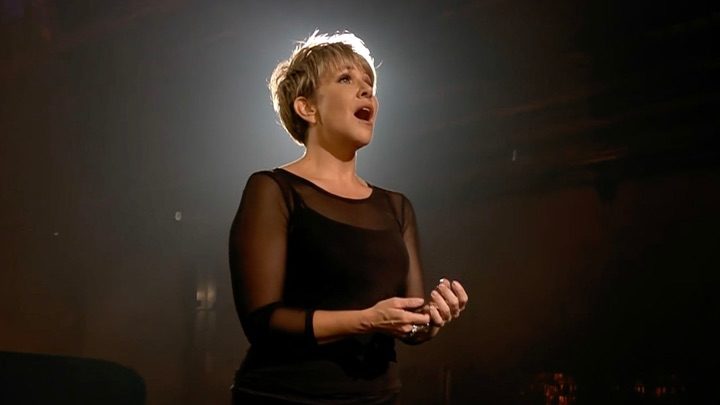 David Fox: Joyce DiDonato isn’t the first singer in this series—by my count, she’s number five, and we’re near the midpoint. But she was absolutely the artist I thought of when Peter Gelb announced this unusual initiative of live-via-remote recitals that keep the Met alive and in reach during the pandemic. It’s not just because DiDonato is a great singer and a star, though she is, of course, both of those things. It’s more because in recent years, she has established herself as something rarer and even bigger. She has become a kind of arts and humanitarian ambassador. Fueled by a fierce intelligence, deep earnestness, exceptional eloquence, and social media savvy, she is a presence and a power, as much when speaking and thinking as when singing. Who better to imagine a program that would suit this (we hope) unique moment? “I Dream a World” is exactly that, and the venue itself—the Jahrhunderthalle in Bochum, Germany, a repurposed industrial space, now showcasing contemporary art—couldn’t be a better metaphor.

Cameron Kelsall: I can’t exactly pinpoint when DiDonato transitioned from an appealing but somewhat standard-issue lyric mezzo to something approaching opera’s Marina Abramovi?. Truth be told, it’s sometimes a bit self-indulgent. Here she treated the recital as monodrama, as she did with her recent Winterreise and her devised Baroque concert/installation In War and Peace. Her appearance here reinforced the idea that we were about to witness a Very Serious Artistic Event. The glowing no-makeup effect. The bare feet. The severe all-black ensemble that seemed to say, don’t expect chitchat or encores. The spherical sculptures dotting the raised dais where DiDonato performed with pianist Carrie-Ann Matheson on one side of her and the early music orchestra Il Pomo d’Oro on the other. In lesser hands, it could veer toward parody. But DiDonato’s fully committed performance, combined with a voice at its peak and a go-for-broke dramatic instinct, instead set a standard to which every subsequent program in this series will have to meet.

DF: I agree absolutely. From the very first moments, we knew we were in for something utterly out-of-the-box. Starting with Ottavia’s “Addio Roma” from Monteverdi’s L’incoronazione di Poppea, DiDonato segued—virtually without a break, but simply moving to the other side of the stage—into Didon’s final scene from Berlioz’s Les Troyens. While marking stylistic distinctions between them, the astonishing thing to me was more the similarities—in the pieces themselves, which I would never have thought to combine (that is, of course, a big part of DiDonato’s point here), but also in her approach to them. This was bold, full-throttle vocalism that threw caution to the winds—sometimes, she diging into a surprisingly robust chest voice, sometimes fearlessly hit high notes dead-center, and often playing with extreme tempos. But always, always, she made points with the text. I could imagine purists finding a lot to question here. Hell, I could even imagine (with some embarrassment) myself, mumbling something pretentious about French neoclassicism, restraint, blah blah blah. But the audaciousness of this performance had me hook, line and sinker. Great artist that she is, in this moment, I couldn’t imagine wanting to hear this music done any other way.

CK: I’ve certainly never been more convinced that I was witnessing Didon’s demise—and DiDonato’s blend of vocal fearlessness and utterly human emotional connection totally suggested a royal death, titanic and pitiable all at once. It was a brilliant and moving performance, and made even more so by her subsequent shift to Mahler’s “Ich bin der Welt abhanden gekommen,” in which she reduced her voice to a near whisper and seemed to take her interpretation entirely inward. I don’t associate this composer with DiDonato’s repertoire, but the work here suggests a full outing of the Rückert-Lieder should be on the horizon once it’s safe to get back in the concert hall. Props to her, too, for coasting effortlessly from Italian to French Grand Opera to German lieder in the span of 20 minutes and making it seem the most natural progression in the world.

DF: The Mahler was certainly a highlight for me. Really, the first three pieces—which constituted Part One of the recital’s three sections (they were separated by short prerecorded features)—were so brilliantly realized, both in conception and delivery, that I wondered how she could follow it. And honestly, I think the remaining parts weren’t quite as thrilling as that first, though there were wonderful moments throughout. After all the high-wattage of the first section, I especially welcomed a simple, poignant performance of “Shenandoah”—though I was also exhilarated by DiDonato’s virtuosic delivery of “Dopo notte” from Ariodante, justly described by host Christine Goerke as one of DiDonato’s “signature pieces.”

CK: I doubt anything could touch the virtuosity and dramatic thrust of the opening group, but I was also moved by the relatively unadorned performance of “As with rosy steps the morn,” from Handel’s Theodora, and tickled by her still-buoyant interpretation of Cherubino’s “Voi che sapete.” A relatively straightforward “La vie en rose” showed that DiDonato can make a capable diseuse. If the recital had a disappointing moment, it was, unfortunately, a notable one: The world premiere of “I Dream a World,” a setting by the composer Kenyatta Hughes of a Langston Hughes poem. DiDonato gave a heartfelt interpretation of a song that speaks to the current global climate of unease and uncertainty, yet Hughes’ music (in an arrangement by Craig Terry) did not match the gripping urgency of the source text.

DF: I agree that I wish both the music and DiDonato’s delivery of “I Dream a World” had etched the Langston Hughes’ text more strongly. I could say more about several of the pieces here, but I think the real takeaway is something larger. The previous Met outings have been terrific in their individual ways, but all have been mostly riffs on a pretty traditional recital format. What DiDonato, Pomo d’oro, and Matheson offered here was a fascinating hybrid theater piece. I’m not sure anyone else could have brought it off, and I don’t think others need to try. But I found it absolutely thrilling. In a brief and very moving commentary, DiDonato urged us to write to our political leaders because “The arts are essential.” And today, they really were.