The production style exposed Peter Shaffer’s Amadeus for what it’s always been: a piece of lowbrow camp masquerading as highbrow art. 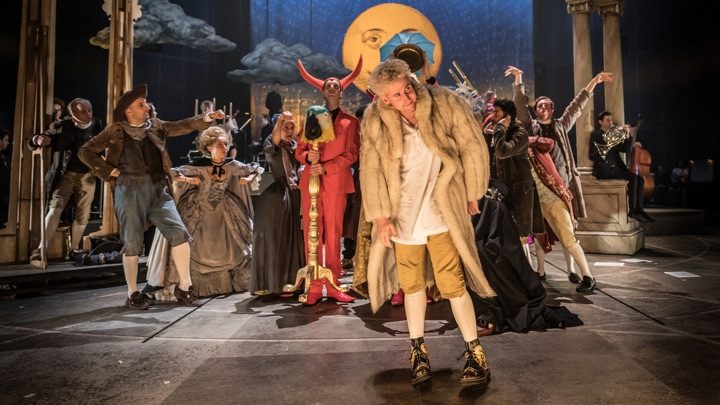 Cameron Kelsall: The National Theatre fittingly concludes its NT Live at Home streaming series with one of its biggest successes. The company premiered Peter Shaffer’s Amadeus at the Olivier in 1979, launching a theatrical phenomenon that would culminate in a Best Picture-winning film adaptation, to say nothing of countless revivals. The production under consideration here, directed by Michael Longhurst and dating from 2016, takes as many liberties with the material as Shaffer did with his exploration of Mozart’s genius and Salieri’s jealousy. The settings, costumes and performance styles revel in anachronism, and the chamber orchestra Southbank Sinfonia provides onstage musical accompaniment. Although I found the entire endeavor largely unsatisfying—and frequently boring—the production style did expose Shaffer’s play for what it’s always been: a piece of lowbrow camp masquerading as highbrow art.

David Fox: Cameron, I find it so interesting that you focus on this highbrow/lowbrow distinction about Amadeus. I’ve seen only one other stage version (and, of course, the movie), and when I reviewed it, this was my opening: “I love highbrow theatre. Also, lowbrow theatre.  What I despise is middlebrow theatre with pretensions, which brings us to Peter Shaffer’s Amadeus, a bloated trifle of a play.” Watching this NT production, I was, of course, very aware of all the ways in which Longhurst and his cast and creative team strove to rethink the piece, but in the end, I arrived at exactly the same place. It’s an occasionally entertaining and cleverly constructed piece of writing—but to me, deeply offensive in its vulgarity, oversimplification, and downright dishonesty. And frankly, if there’s anything that Amadeus does not benefit from, it’s the kind of frenetic excess that anchors every element here.

CK: The “frenetic excess” you cite only seems to underscore how unsatisfying an evening it ends up being. The performances are all pitched to high-octane—none more so than Adam Gillen’s Mozart, a whirling dervish of an overgrown man-child, and often unintelligible. If Longhurst wanted to underscore Salieri’s declaration that Mozart is the most unlikely vessel for God’s divine inspiration, that certainly comes through. But after five minutes or so, Gillen’s ranting and flailing grows tiresome—as does the ensemble’s seeming dedication to treat every role, no matter how small, as if it were a showstopper. Surprisingly, the only performance that feels a bit under-gunned is Lucian Msamati’s Salieri. After the character’s histrionic final confession, which opens the play, his interpretation of the proud and vain man largely lacks gravitas.

DF: Gillen’s take on Wolfgang Amadeus Mozart is Monty Python sketch comedy acting, but it’s not entirely his fault—both the script and the long tradition of how the ole is played is pitched to this idiotic gimmick. Really, before going on to talk more about the acting, I’m not yet ready to let Shaffer off the hook. Amadeus, though seemingly chock-full of facts, is rubbish.  One could scarcely catalog the many vulgarities of Shaffer’s script (and I don’t mean the silly fart jokes): radical oversimplification, tired clichés about court intrigue, an especially crude portrayal of Mozart’s wife, Constanze (in fact, she was a musician of note)… I could go on, but why? So now, back to the acting. I thought Msamati was a compelling presence, but for me the performance never found a focus. Notably, he fumbled the one moment I thought could never misfire in the play: Salieri first hearing a Mozart wind serenade, and realizing profoundly his own inadequacy in the face of genius. But—for this moment to work, it needs subtlety and a pause of uncomfortable quiet. Msamati instead acts up a storm… and kills it.

CK: I should note that the Southbank Sinfonia executes this moment, and many others, with real beauty—spoiled only by Gillen’s manic faux-conducting. Of course, this only underscores the fact that you’d rather be hearing the genuine article instead of Shaffer’s imagined cleverness. But instead, the play goes on for nearly three interminable hours—most of which, I have to confess, I spent sneaking glances at my phone.

DF: Agreed that by the end, it was all I could do to remain seated and focused on the screen. It was frustrating because I actually thought the first moments of the show were promising—the mix of contemporary and historical seemed just right to me, in that Amadeus (for better or worse) is really far more about how modern history records Mozart than about his actual life and times. Longhurst also makes excellent use of the Olivier stage’s exceptional depth—this is certainly a visually striking staging. But the script is so overwrought that it needs real restraint in the playing; instead, here it gets the polar opposite of that.

CK: “Utter restraint” is absolutely what you get from the brief clip of Paul Scofield in the original production that we can find on YouTube. He manages to pack more depth and mystery in three short minutes than anyone in the current productions brings over the course of three hours. Scofield is not an actor I associate with flashiness at all, which absolutely works to his favor here—through total restraint, he shows how Salieri is instantly crushed by the knowledge that his talents will never equal Mozart.

DF: Completely agreed about Scofield. I hadn’t realized he created the role, and when I saw that it felt so right, since I think he’s notable for his quiet intensity. And the scene you’re describing is exactly the one I was thinking fell flat with Msamati. Scofield actually makes it touching, though I always feel about this—and really, about the play itself—that it’s essentially an attempt by Shaffer (not even a Salieri among playwrights) to rationalize a second-rate talent. Consider the final words to the audience: “Mediocrities everywhere – I absolve you all!” Well, speak for yourself. I’m not feeling that generous.