Some consider Katharine Hepburn a tomboy — I don’t share that view, but the particular iconoclastic style she was already cultivating in her early days certainly suits Jo March. 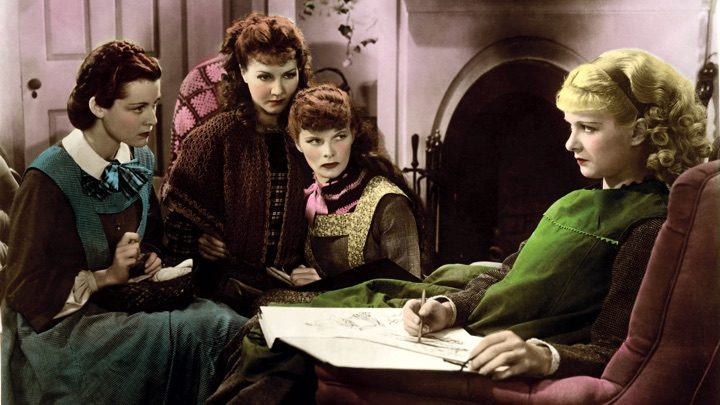 David Fox: It is, of course, Kate Hepburn who brings us to Little Women. But before we get to her, I’d like to say a few words about my odd relationship with Louisa May Alcott’s beloved work of fiction, written shortly after the Civil War. Namely, to admit that even as a child, I resisted it, unread. It’s hard for me to articulate why, exactly. Not because it was a (maybe the) archetypal “girl book.” I devoured the entire oeuvre of Helen Dore Boylston, and copies of her complete Sue Barton and Carol series still anchor my library. (As for “boy books” — just as a title, The Call of the Wild makes me shudder.) I think it was fear of overt, sniffly sentimentality that put me off of the idea of Little Women.

Cameron Kelsall: I confess I’ve never read the book either, and my first exposure to the material was less than ideal: A flop musical adaptation that is probably responsible for my ongoing ambivalence toward Sutton Foster. The less said about it, the better. I’ve also seen the Gillian Armstrong-directed film version from the ‘90s, which features strong acting from Winona Ryder and Susan Sarandon — and a young Christian Bale in a brief Byronic phase — but also seemed soppy and cloying.

DF: Undeniably, some of George Cukor’s great 1933 adaptation buys into that: Beth’s final scene is an apotheosis of RKO schmaltz, featuring both an unseen angel choir and chirping birds, along with actress Jean Parker, who could not be more beatifically luminous. But if that is (for me, at least) a low point in the movie, there are several dozen highs to counteract it. Much of it I found unexpectedly delightful and upbeat. It’s certainly an idealized version of sisterhood, but bracing and full of charm. And in Jo March — a character who practically stood for tomboyish originality — Hepburn is an inspired choice. In what is only her fourth film, one once again marvels at how fully-formed and even iconic she already is.

CK: Some consider Hepburn a tomboy — I don’t share that view, but the particular iconoclastic style she was already cultivating in her early days certainly suits Jo March. She’s vibrant and funny throughout, and often moving without being maudlin. (The scene in which Jo concedes that she would have married her sometime-beau Theodore Laurence, but ultimately resigns herself to the knowledge it won’t happen, is especially well handled.) It’s not a perfect characterization, though. As with Morning Glory, there are spots where she seems a little too aware of her character’s inhibition, sliding down banisters and stomping around the modest March family house like a roaring giant. That, to me, signals an early awareness of the parts of the Hepburn I find less appealing.

DF: I see what you mean here, though I found myself admiring what in a way might be seen as the actor’s bag of tricks — the broad physicality you’ve noted (it’s a sweet moment when she carries the frail Beth downstairs as a groom might hold his bride), and her general boisterousness. I noted with some interest that this is the second film in row (after Morning Glory, which we last wrote about) where KH is given a few “set pieces” to show her stuff: hamming up the role of a villain in her Christmas pageant; accompanying her own singing on guitar. If Little Women is by definition an ensemble piece, I think Hepburn manages very deftly to make herself part of the group, even as she announces herself as the star.

CK: I do think the film is an ensemble piece — and that Hepburn comes across within and without at various points. That said, there are multiple memorable performances throughout. Parker, whom you’ve already mentioned, tries to cut through the more bathetic elements of Beth’s storyline, which occasionally proves hard in this adaptation. (The leap from her first febrile cough to her deathbed comes at warp speed, and at one moment, she rises up like the Bride of Frankenstein). Frances Dee is warm as Meg, the sensible sister, and Spring Byington is a sympathetic presence as Marmee. Paul Lukas totally charms as Professor Baer — with him, Jo needn’t look twice at Laurie, who is played with a level of feyness by Douglass Montgomery that almost suggests coding.

DF: “Fey” is exactly the word that came to my mind about Montgomery, which reinforced a general question I have about Little Women: How are we meant to read Laurie? In this (and also in a fun but kitschy 1979 television adaptation), he comes off as devoid of masculinity and vigor: he’s first seen confined to his home with a cold, and anyway — why isn’t he off fighting in the Civil War with the rest of the men? This, shall we say, suspicious reading of Laurie of course jibes with reading Jo’s “tomboyish-ness” as standing in for… well, you know. (In the Cukor film, KH seems to bring all the testosterone to their meeting scene.) But as you say, Christian Bale is Byronic (at least when he’s not being a serial killer), and other Lauries  — including Timothée Chalamet in Greta Gerwig‘s adaptation — seem to represent a kind of romantic ideal.

CK: Chalamet comes across as wispy and very contemporary in Gerwig’s adaptation. And both Saoirse Ronan here and Ryder with Gillian Anderson are very feminine, even if they occasionally wear pants. I used to jokingly say that Jo was a “tomboy” because lesbianism hadn’t been invented when Alcott wrote the novel. But perhaps it’s just that the work opens itself up to multiple viewpoints. Cukor’s treatment certainly tracks with his reputation as a “women’s director” — it’s willowy, stagey and melodramatic. Gerwig’s 2019 treatment, which I loved, struck me as self-consciously devoid of sentimentality. I found myself caring for the characters in ways I never had before.

DF: I’m of multiple minds about Gerwig’s film, but I need to give a context… without spoiling it. So, I’ll just say that in the last 10 minutes or so, she pulls off such a brilliantly sly theatrical coup that it completely re-oriented my general take on the movie. I urge others to see it through to the end before drawing conclusions. But I’ll also ‘fess up that I didn’t love everything Gerwig does. Breaking up the story’s timeline adds energy and momentum, but it’s hard to follow. It also means that the sisters are seen paired up with male companions very early on, which I think takes away from Alcott’s female-centered narrative. I also found the physical beauty of the March girls — and even more, of their suitors — beyond idealization. If there’s a world where my optional husbands are Chalamet, James Norton, and Louis Garrel, please tell me how I can find it! But as I say, the ending gives it a sense of purpose.

CK: The four actresses who play the March sisters in Gerwig’s adaptation (Ronan as Jo, Emma Watson as Meg, Florence Pugh as Amy and Eliza Scanlen as Beth) are luminous, no doubt, but so are most actresses, so I don’t feel the need to debate their beauty. I thought each gave a lovely performance, though I wasn’t as bowled over by Pugh as some others. (She, along with Ronan, earned the film’s acting Oscar nominations.) I thought Scanlen was the most sympathetic Beth I’ve ever seen, entirely without artifice, and the final scene between her and Ronan had me genuinely sobbing. There are also several sharp turns in small roles by stalwart New York theater actors: Jayne Houdyshell as the March family servant, Hannah; MaryAnn Plunkett as the landlady Jo works for when she moves to Manhattan; and Tracy Letts as a cantankerous editor in an imagined frame narrative. And I agree — the final swoop of the film is stunning.

DF: I also enjoyed Meryl Streep as Aunt March — was it merely my imagination, or did she almost seem to be winking at Edna May Oliver‘s famous dragon-lady performance of the role with Cukor, while still making the character her own? Anyway, all this has made me feel that that time may have to come to actually read Alcott’s original. Just as soon as I finish my umpteenth traversal of Sue Barton, Visiting Nurse.