One of the greatest pleasures of our continuing Katharine Hepburn series for me has been rediscovering how marvelous she can be. 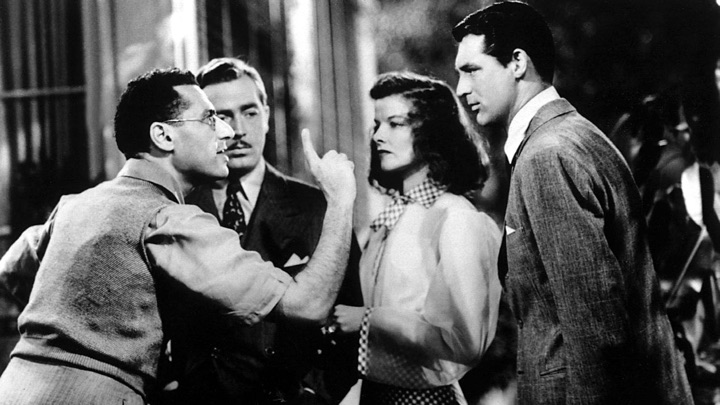 Cameron Kelsall: Kate. Cary. Cukor. Barry. Put these four together and you’ve got a match made in high-society heaven. Playwright Philip Barry found his muse in Katharine Hepburn, who understudied the role of Linda Seton in the 1928 Broadway premiere of his hit play Holiday. A decade later, she graduated to the lead in a film adaptation opposite Cary Grant, hot on the heels of their screwball success in Bringing Up Baby. It’s a charming, stylish film, directed with class and flair by George Cukor, and it presages the blockbuster success of The Philadelphia Story two years later. David, I hadn’t seen TPS in close to a decade before this re-watch, and I was struck by how pitch-perfect it remains in almost every respect. The script sparkles; the acting, to a person, is divine; and even though the filmmaking is still somewhat rudimentary, it totally captures the ethos of blue-blood society on the Main Line.

David Fox: Including a Main Line house set that actually looks like the Main Line! I know, because it’s only a few miles from where I live in downtown Philadelphia, though the sense of American aristocracy that Barry’s play and the TPS film convey with astonishing verve and gorgeousness is light years away from my own life. One of the real takeaways for me in watching this movie now is to understand far more viscerally the nature of fantasy and wish-fulfillment in American entertainment during the dark days of the Depression and the warning signs of coming war. But while I think it’s easy to just let the luxury wash over us, I also want to point out that Barry—a writer who showed considerable range in his 30-year career—did, in fact, have a message of social reform to convey. That is much clearer in Holiday, I think.

CK: I’m glad you brought up the Depression, because to me it’s a necessary frame for Holiday. The original Broadway production opened almost a year to the date before the ‘29 Crash; at the time, it depicted a world of wealth and splendor seemingly without end. When this film adaptation was produced a decade later, the story stood as a time capsule to an era that felt very far away, as well as a precursor to the liberal social politics that FDR would make the center of his presidential platform. Barry seems to have both predicted the seismic economic event of the 20th century and its aftermath in this play, which revolves around a brash outsider who teaches a stuffy Park Avenue family that money isn’t everything. It’s tantalizing to wonder how the Depression might have treated the Seton family, shown here in the lap of luxury, and concerned with little else than minting money.

DF: A few striking details that reinforce both the similarities and distances between the two. The films are just two years apart (in IMDB’s Hepburn filmography, they are listed as #15 and #16). In both, she’s paired her with Cary Grant. And both, as you pointed out, are directed by George Cukor. But I think they are tonally quite different, and I don’t think it’s merely a coincidence that Holiday has had multiple stage revivals on Broadway and elsewhere, while The Philadelphia Story—which would be a far more familiar title to most audiences—is infrequently done on stage. Holiday has an altogether gentler and more introspective quality, with some moments of genuine pathos and thoughtfulness cutting through the comedy. The late-ish scene between Linda (Hepburn) and Johnny (Grant) is really quite moving, and both of them play it for considerable sentiment. (I remember this scene as a highlight in a Los Angeles production I saw decades ago that featured Kevin Kline and Sally Kellerman.) More generally, I think Holiday is interesting for giving us a kind of hybrid performance that mixes her skill at brittle comedy with her translucent emotionality.

CK: Hepburn is wonderfully vulnerable in a way that I don’t often associate with her, which contrasts nicely with Doris Nolan’s performance as ice-princess sister Julia, Johnny’s intended bride. She also displays a nurturing warmth toward Ned (Lew Ayres), the baby of the family, a self-destructive alcoholic (and barely coded homosexual).

DF: Gay code for sure, though I can imagine many in the movie audience didn’t pick it up. Ayres, of course, had a very significant film career that lasted nearly half a century. Nolan also did a number of movies, but she’s far less well known. Both are really very fine here, I think, as is (of course) Edward Everett Horton as the eccentric Professor Potter. But for me, the real impact comes from Barry’s bold and brave assertion that the quest for money is overrated. Though there is much to love about TPS, I don’t think that the social messaging is nearly as positive. Really, it’s hard not to fall in love with the Lords for their charm, and envy them for their affluence.

CK: Indeed—it’s important to remember that the play was written at a time when debutantes and their families were viewed through the same celebrity lens as reality television stars are today. Barry understands the patois and the style of this class, but he often stops short of critique, perhaps as a way to avoid rehashing what he’d already done with Holiday. The pleasure of TPS very much comes from the thing itself. There’s hardly a line in Donald Ogden Stewart’s Oscar-winning screenplay that isn’t eminently quotable, and every role is cast from strength. We expect Hepburn (Tracy Lord), Grant (C. K. Dexter Haven) and James Stewart (Mike Connor) to be top of the line, but I’d forgotten how wonderful Mary Nash was as Mother Lord…

DF: What a treat it was to see Nash in this role. The fluttery social mother was an archetype—this might have been Billie Burke or Alice Brady, both of whom specialized in it, though Brady tragically died a year before this movie was made. But to me, at least, Nash is unexpected. I knew her as a child from Heidi, where her ruthless Fräulein Rottenmeier—the enemy of darling Shirley Temple—had, frankly, scared the shit out of me. Her comedic brio and appeal here could not be more different.

CK: Also, that Virginia Weidler gave one of the great juvenile performances of all time as Dinah.

DF: It takes a lot to steal a scene from Hepburn, Grant, Stewart, and company at the height of their star-power, but Weidler does exactly that; really, she very nearly walks off with TPS. She’s utterly astonishing—completely natural, and able to sing “Lydia, the Tattooed Lady” in a Merman-esque belt one minute; vamping in French in another; and delivering firecracker sarcasm, too. She’s Margaret O’Brien and Gloria Grahame rolled into one! And consider this: Weidler was 12 or 13-years-old when this movie was made; it was her 37th or 38th film; and she retired just a few years (and 10 more pictures) later, disappearing into private life. What a story!

CK: For sure, and how wonderful to have her unique talents preserved in a meaty role like Dinah Lord. She proves every bit Hepburn’s equal in terms of commanding a scene. So do Stewart and Ruth Hussey, playing the interloping journalist and photographer sent to spy on Tracy’s wedding. Stewart won his only Oscar for TPS, and the Midwestern starchiness I find somewhat off-putting in other roles lends itself perfectly to his character’s outsider status. Hussey is an absolute whiz with a one-liner. But don’t you think they could just as easily be playing Dexter and Tracy themselves, given how glamorous they come across?

DF: I absolutely agree, and I think that’s one of the few misfires in TPS film. Scene after a scene here is a study in patrician deportment and style—really, one way of looking at it is as a movie about cheekbones. But I believe we’re meant to see Mike (Stewart) and Liz (Hussey) as from a different social stratum. They’re cynical observers, looking into a fancy shop window. The original stage casting had Van Heflin and Shirley Booth in these roles, both actors who would become identified with more working class personae. The movie could have used more of that… but, on the other hand, Hussey and Stewart are absolutely superb on their own terms. Really, I think it’s my favorite performance of his… and frankly, I’d forgotten how adorable he was in those early years.

CK: Stewart’s charm and handsomeness does make it believable that Tracy would actually abandon her society status to run away with Mike, rather than just callously leading him on, as their brief affair might seem with a less conventionally attractive actor in the role. And there’s pleasure in just watching Stewart and Hepburn interact at the top of their game. I came to know Hepburn first through her late-career film appearances and public persona, which can both be self-indulgent and arch. What a revelation it is to go back and see her in such effervescent form as a young, vibrant comedian.

DF: One of the greatest pleasures of our continuing Hepburn series for me has been rediscovering how marvelous she can be. I, too, found that my memory had been dominated by her late appearances, and frankly, I worried that I’d find the mannerisms annoying even here in the relatively early TPS. But she really is simply extraordinary… and, of course, sui generis. This may be the apotheosis of her comedic glamour, and she gives it all she has—bracing athleticism and boundless energy that somehow manage to look relaxed at the same time! (And has anyone else ever made wearing pants look so stylish?) The funny accent could hardly be more apt here. And of course, there’s also the greater-than-great Cary Grant. But still, Hepburn probably remains The Philadelphia Story‘s main takeaway. For many, it’s her definitive performance—and who am I to disagree?