“Whatevah shall we do with Mothah?”

The characteristics that made Katharine Hepburn's performance in A Delicate Balance work so well do her a disservice here. 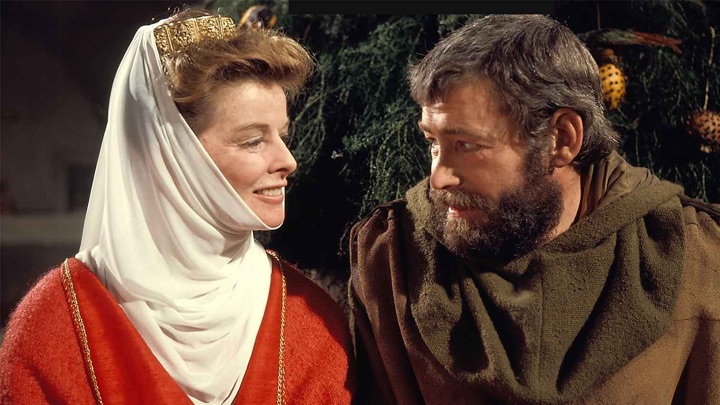 David Fox: Cameron, our last excursion into the Katharine Hepburn film oeuvre focused on a superb late-career performance that should be far better known. Playing Agnes in A Delicate Balance, she dispatched Edward Albee’s brittle verboseness with all the wit and brilliance one could ask for. Now, we’re turning our attention to a much more celebrated Hepburn movie from a few years earlier: The Lion in Winter. This, of course, was the source of her third Oscar, in a famous tie win with Barbra Streisand in Funny Girl. (If only the two had reversed roles!) Lion, too, is based on a hit Broadway play (by James Goldman,) but of course this one has a completely different setting—a battle royal on the coast of France in the 12th century. And yet, watching the two movies a week apart, I’m struck more by the similarities. Basically, Lion is A Delicate Balance… set in 1183! So, we get wimples rather than caftans, mead standing in for martinis, and Eleanor of Aquitaine (Hepburn, of course) instead of Tobias of Aquascutum.

Cameron Kelsall: I feel the need to make a slight correction, David: Although Rosemary Harris won her only (!) Tony Award for playing Eleanor onstage, the original Broadway production was actually a flop, closing in just two months. The film adaptation, which came out two years later, did much to rehabilitate the property’s reputation—it was nominated for seven Oscars and won three, including Hepburn’s. The Albee comparison is apt, since Goldman intentionally styled his play like a contemporary comedy of manners, forgoing ye olde speech in favor of a steady barrage of bon mots. But even Albee at his most arch is far more redeemable than what’s on display here. I’ve never seen the play onstage, but Goldman’s Oscar-winning script barely rises to the level of boulevard comedies of the era. You’ll find more depth in Cactus Flower or Any Wednesday, and be spared the pretentious posturing that comes with period intrigue.

DF: I saw the 1999 revival with Stockard Channing and Laurence Fishburne, which was, to put it generously, a mixed bag. But in its way, Lion works on stage… if you lean into the irony of turning the court of Henry II into a bitchy cocktail party, which that production did. Without much sense of spectacle, and even the physical fighting scaled way back, there was some droll humor. But here, Goldman (who also wrote the screenplay) and director Anthony Harvey want to have it both ways.

CK: “Having it both ways” certainly applies to John Barry’s score, which is half faux-Gregorian chant, half prog-rock.

DF: I’d add another score component: syrupy romanticism. Likewise, the film script retains those bon mots (which are mostly pretty far from bon, in my book), but also traffics in the sort of sweeping visual world I always associate with historical epics: jousting, carousing, packs of horses, barge trips, etc. Honestly, I think all this puts the cast in an impossible position, Peter O’Toole as Henry in particular. He’s simultaneously trying to be Anthony Quinn and Noël Coward, and his solution—which is to yell, growl, or spit almost every line—isn’t a good one.

CK: Yes, the physical style of the film—and the sort of acting it evokes—could easily be mistaken for Monty Python. The absolute worst offender is Nigel Terry as the doltish John, but really, each and every performer has their share of cringeworthy moments. Remember Hepburn staring into her mirror, slurring like a regional-theater Martha who’s six sheets to the wind, trying to decide which necklace to wear: “I’d hang you from the nipples, but you’d shock the children.” Or Jane Merrow pouting her way through the mistress Alais, giving what seems to be the ultimate “producer’s girlfriend” performance. The men—including Anthony Hopkins and Timothy Dalton in early screen appearances—go a bit too far in the other direction, projecting stiffness as if it were synonymous with dignity.

DF: Before we get deeper into the performances, I want to say a bit more about the script, since I give everybody a bit of a free pass in light of the coarse material. Goldman’s dialogue vacillates between heavy-handed exposition (Henry: “There is a legend of a king called Lear, with whom I have a lot in common. I must know who will be on the throne before I die. I built an empire—all of Britain and much of France—and I must know it’s going to last”) and crudeness, which I assume he imagines as shockingly naughty (Henry again, when asked how Eleanor is: “Decaying, I suppose… I haven’t kept the great bitch in the keep out of passionate attachment.”). What is an actor supposed to do with this? It’s no wonder that the cast largely fall back on their bags of tricks. Dalton, at least, is mostly quiet, which is a relief.

CK: By this point in her career, coarseness was a Hepburn stock-in-trade, so she fits right in. Or am I being unfair?

DF: I had certainly remembered her performance that way, including that even when I first saw it as a teenager, I nearly doubled over with laughter at—and imitated for days after—her line reading of: “De-ah, de-ah. Whatevah shall we do with mothah?” This was truly Bryn Mawr comes to Chinon. Now, looking at it again, I feel somewhat more generous. The role is so awkwardly written, it’s nearly unplayable. One minute she’s a grande dame, the next (as you pointed out in the “nipples” speech), she’s Tessie Tura.

CK: The characteristics that made her performance in A Delicate Balance work so well do her a disservice here. I would add that while there’s a lot of unintentional humor to be drawn from some elements of Hepburn’s performance, she’s also an actress who seems unwilling to veer toward intentional camp. Perhaps that’s to her credit, but we’re dealing with pretty cheap material here. The role of Eleanor as written really requires someone unafraid of barnstorming—I didn’t see Channing, but I can imagine her being right for it, given that she’s always very grand on stage—but Hepburn plays her as a cool, controlled society matron.

DF: I suppose one of the elements I appreciate here is related to her restraint. Even in some of Hepburn’s weakest performances, I find a fierce intelligence at work; also, a lot of panache. Both qualities are on display here. I often find myself thinking that—if you were seeing her for the first time—no matter what the vehicle, you’d be knocked out: she’s so utterly original and distinctive. But the downside of that, of course, comes with familiarity. More than once, watching her, I’ve been reminded of a line of Prior’s in Millennium Approaches: “It’s something you learn after your second theme party: It’s All Been Done Before.”

CK: For what it’s worth, I’ve always thought that while Dorothy Parker’s famous quip that her acting talent “ran the gamut from A to B” was certainly cruel, but not entirely inaccurate. Many others surely disagree. But in terms of seeing her at her very best—and her most youthful and effervescent—we have that on the horizon, when we jointly consider The Philadelphia Story and Holiday next week.

DF: Yay! Martinis back, replacing the mead. I’m in!