Some things are not forgivable

Perhaps the idea here is to give Tennessee Williams’ 1947 play a renewed sense of visceral power that speaks to a younger audience? Maybe, but it doesn’t speak to me. 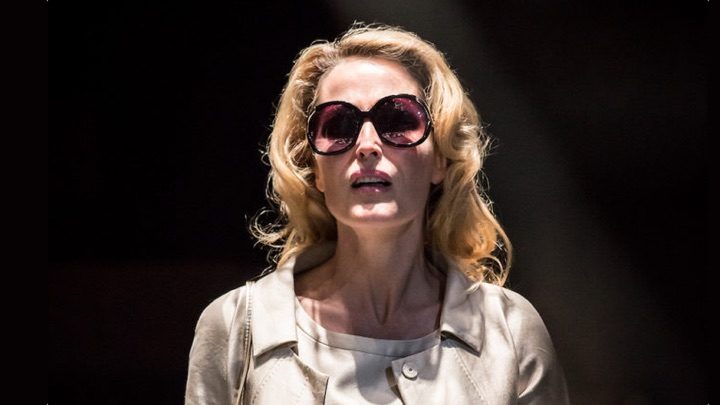 David Fox: I didn’t see director Benedict Andrews’ A Streetcar Named Desire, which was first staged at the New Vic and later in the U. S., in the theater, but I previously saw (and reviewed) this NT Live HD-cast when it came to a local movie theater in 2014. Still, I welcomed the chance to revisit it. It’s not rare that my reactions evolve over time, and I find new elements in a second viewing. So it was here—what I first thought was sincere but wrongheaded, I now find appalling and largely irredeemable. Perhaps the idea here is to give Williams’ 1947 play a renewed sense of visceral power that speaks to a younger audience? Maybe, but it doesn’t speak to me. If you were to look at the screen with the sound off, you might think you were watching David Rabe’s Hurlyburly: a crew of second-rate people, wandering around a non-descript contemporary home, with little sense of purpose or momentum. What’s utterly lost in Benedict Andrews’s garishly reconceived Streetcar is lyricism, poetry, all sense of the South or American history more broadly… and even worse, any dignity for the female characters.

Cameron Kelsall: When this production traveled to St. Ann’s Warehouse in Brooklyn after its initial London run, I dutifully bought a ticket based on the rapturous reviews it received across the pond. Virtually everything about the experience left me cold, from Gillian Anderson’s skillful but empty performance as Blanche DuBois to Andrews’s period-eclipsing mise-en-scene. It was intriguing to return to this interpretation after seeing the director’s take on Cat on a Hot Tin Roof—which you and I caught together a few years ago at an NT Live relay—which confirmed several suspicions I had about how he views the Williams milieu, and American life in general. Among other things, Andrews seems to regard Williams’ southerners as little more than trailer trash—either with (Cat) or without (Streetcar) money. It’s evident in the aesthetics: here, we first see Anderson’s Blanche sporting knockoff Chanel sunglasses, toting a fake Vuitton valise; when she arrives at Elysian Fields, she encounters Stella’s neighbors drinking from brown-paper bags. Stella herself (Vanessa Kirby) seems to be outfitted entirely from the sale rack at H&M.

DF:… and when you arrive looking like a Kardashian wannabe, you’ve clearly already hit rock bottom. Where is there to go? Seriously, two horrific mistakes in this production are made clear already. The first is the failure to capture Williams’ extraordinary insight and eloquence for… well really, for all his characters, but especially Blanche. Here’s an excerpt from a short speech she has when she tells Mitch about herself:

I have the misfortune of being an English instructor. I attempt to instill a bunch of bobby-soxers and drug-store Romeos with reverence for Hawthorne and Whitman and Poe!.. Their literary heritage is not what most of them treasure above all else! But they’re sweet things! And in the spring, it’s touching to notice them making their first discovery of love! As if nobody had ever known it before!

Blanche is delicate, cultured, generous and vulnerable. With these key traits coarsened and essentially nullified, you might as well abandon ship. But equally destructive is that in Anderson’s portrayal, Blanche is so far gone from the start that nothing takes us by surprise. This is the first production I’ve seen where her flirtation with the under-aged delivery boy passes without instilling a jolt of shock at how far she’s declined.

CK: A turntable that keeps moving almost constantly—the production’s primary physical attribute—first starts to lumber and spin after Blanche’s says, “I’ve got to keep hold of myself.” But it’s clear even then that her grip on sanity is lost. Literally and figuratively, she’s already spinning out. Where does that leave the actor playing her in terms of building a character? Where does that leave the audience in terms of building empathy? Anderson is technically impressive and elegant onstage, but I don’t think I’ve ever encountered a less sympathetic Blanche. And Andrews seems to hold her up as an object of ridicule at every turn.

DF: Bingo. To me, the heart of the play occurs when Blanche reminds Stella that because she—Blanche—stayed home and cared for their family as they slowly died off, Stella was able to get out. I think what Blanche did was heroic… and also, tied to the long history of Southern women left behind in the Civil War. As depicted here—shrill, whiny, self-centered—she’s little more than the houseguest from hell. Where’s the play in that?

CK: It’s a shame, because if Andrews does have one interesting idea, it’s in the conception of Stella’s relationship to Blanche. The mixture of loyalty and revulsion that exist side-by-side is an underexplored element of Stella’s bond with her younger sister—another fact that’s easy to forget, since Blanche is usually so dominant. Kirby’s performance is sometimes a touch on the wan side, but at her best, she really conveys the self-preservation instinct that drove Stella to leave Belle Reve and set up a separate life for herself in New Orleans. And, more so than Kim Hunter in the 1951 film, Kirby’s Stella seems as culpable as her husband in ultimately shipping Blanche off to the funny farm.

DF: Well, of course Andrews’ production gives us the original, far more brutal play ending, rather than the softer but more culturally acceptable adaptation for the film, where Stella walks out on Stanley. I wonder how Hunter came across on stage? I agree that in the film, she sometimes seems too saintly-sweet. That certainly is not the quality that Kirby projects—and I agree, the take on her is one of the few interesting elements in this production. I still recall my college playwriting teacher surprising us with his take that Stella is actually the pivotal character in Streetcar, since she—more than either Blanche or Stanley—can change the situation.

CK: Let’s talk Stanley for a moment. Obviously, Marlon Brando casts a pretty tall shadow, and in my experience, the best interpretations have been the ones that get as far away from his particular style as possible. That certainly describes Ben Foster’s bantamweight take on the part, but even more than Anderson, his performance feels like a complete wash. Entirely lacking a sense of menace or danger—the qualities that both attract women to him, and repel them—Foster is about as threatening as an Eagle Scout.

DF: I think Foster—so good in Six Feet Under—is shockingly out of his depth here. Not only does he lack danger, as you say—on the other end, there’s also not a hint of humor or charm. Of course, Brando uniquely has all of it together, and beyond that the kind of sexual charisma that feels like a train coming at you full speed. But I do think there’s an argument to be made that Brando’s performance pulls some of the shape out of Streetcar. Among the stage performances I’ve seen, I really admired Alec Baldwin, whose more life-sized, often disarmingly funny Stanley made dramatic sense and seemed more equally paired with Blanche. But no argument that Foster brings virtually nothing to the party—nor does the drab Mitch of Corey Johnson. The male actors here really let this Streetcar down.

CK: If Andrews has too many ideas about Southern women, he has very little to offer in thinking about Southern men. Early on, we see Foster relieving himself into a toilet in full view of the audience, suggesting boorishness—but it’s reductive to view Stanley simply as a Neanderthal. He is an American man of his time—his quoting Huey Long’s declaration that “Every man is a king” is important—and that is lost when you place him in a context-free production that is needlessly contemporized.

DF: Exactly. The updating here is utterly nonsensical even within itself—what young people today are listening to Xavier Cugat records on the radio?? But more deeply than that, Streetcar follows by just a couple of years the end of World War II, and exists within a historical moment that celebrated males in particular as full of promise and possibility, regardless of who they are. That ironic disconnect is missing here.

CK: Is there anything else you want to say about this production—which, I should mention, is available to stream for free on YouTube through May 28?

DF: Yes. Despite—or maybe because of—all my negative feelings about Benedict Andrews’ interpretation, I think it needs to be seen. It represents some very particular ideas about Williams that are worth putting in context.

CK: I agree. Thankfully, we’ll have the opportunity to look at a few other versions of Streetcar over the next few days.

[In lieu of an Opera in Exile offering Sunday afternoon, La Cieca suggests the cher public stream and discuss this production starting at 2:00 PM.]