Although Kim Stanley’s big-screen appearances were rare—four major film roles, plus the uncredited narration in To Kill a Mockingbird—she was the leading lady of television drama’s “Golden Age.” 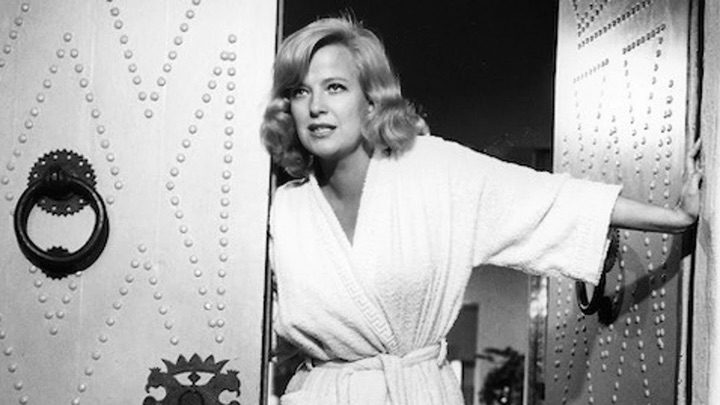 David Fox: Cameron, when last we saw Method icon Kim Stanley, she was in late-career dishabille, starring in a moody Tennessee Williams duologue, and I contextualized her performance with icky, almost prurient quotes from a couple of famous males who seemed to dine out on Stanley’s all-too-transparent trauma. Now we’re looking at two much earlier examples of her work—prime Stanley, at least in terms of the timing: A Young Lady of Property (1953) and The Traveling Lady (1957).

Cameron Kelsall: Although Stanley’s big-screen appearances were rare—four major film roles, plus the uncredited narration in To Kill a Mockingbird—she was the leading lady of television drama’s “Golden Age.” She appeared in more than fifty presentations between 1950 and 1960, when the burgeoning TV industry was largely centered in New York and recruited heavily from the stage. Most of her productions are lost to time, a hazard of the medium, but several can be found on YouTube, and the offer a look at how she bridged the gap between theatrical and filmed acting in this hybrid genre, as well as the nascent production values of these one-time-only presentations.

DF: To get us started, I’d like to frame these performances with some more measured commentary on Stanley by film scholar Dan Callahan, from his invaluable book, The Art of American Screen Acting, 1912-1960. Callahan, while noting the power of Stanley’s “frayed immediacy and her predilection for unearthing the most painful emotions,” also points out that “she seemed to have viewed her profession as some kind of adjunct to psychotherapy… she can stand in, as example and cautionary tale, for what was happening in acting for women at this time.” Frankly, I find both of these shows—by the greatly admired Horton Foote—to also be a kind of cautionary tale in American dramatic writing.

CK: Something that has always bothered me about the prolific Foote, which is already on display here in what might be termed apprentice plays, is the rather small-minded duality with which he considers city life versus small-town values. Both Young Lady and Traveling Lady are set in the fictional Harrison, Texas, a stand-in for his hometown of Wharton, where the people are simple but pure, and pleasure comes from accepting your lot in life. Contrast that with the modern-day Sodom of Houston, where people lose their identities and their morals right quick. This dichotomy is also at the heart of what’s arguably his most famous work, The Trip to Bountiful.

DF: As you say, there’s a lot of Foote material in the canon, and to me Young Lady is mostly a showcase of his limitations. He’s nothing if not earnest—but also reductive. Here we have a kind of classic Foote recipe: men bluster, women suffer, and the black help look on with stoic compassion. It’s interesting to me that Stanley would make Foote’s work (along with better material by William Inge and Tennessee Williams) something of a signature—she did at least three Foote TV adaptations—because his home-grown simplicity doesn’t feel like a natural fit. But then, in life we know she reimagined herself as a Texan despite being born and raised in New Mexico. And wearing her heart on her sleeve certainly was a Stanley trademark, which she gets to use a lot here.

CK: What’s interesting to me is that two of Stanley’s most notable roles—Wilma in Young Lady and Millie in Inge’s Picnic—find her playing teenagers, even though she was already a twice-married mother herself by that point. Her tomboy casting in Picnic always seemed a little odd, not least because she tended to portray very feminine characters elsewhere. But Young Lady finds her, like Julie Harris in A Member of the Wedding, utterly convincing as a juvenile in manner, even though she looks every inch an adult. Emotional transparency is always at the heart of Stanley’s acting persona, and who is more emotionally transparent than a fifteen-year-old? The alive-in-every-moment thrill that Frank Langella (creepily) associated with Stanley is on display, as she takes us through the exuberant inner-life of a girl who balances dreams of Hollywood stardom with the unrequited death of her mother, who allegedly left her the modest home in which she was born. (Hence the title.)

DF: Agreed about Stanley’s ability to play a young person—an actor friend of mine was astonished by her in Picnic, and this gives me some idea why. I would say she is generally not, to my mind, the most protean of actors. It’s commonly thought that the Method wasn’t all that interested in detailed, individualized character work, though I think both Marlon Brando and Geraldine Page are shining counter-examples. But Stanley to me is always recognizably herself, so it was good to see how much she was able to make this transition. For me, she is really the only thing that enlivens an otherwise trite, moralistically shallow piece in which a girl abandons her (admittedly unrealistic) fantasy life to fulfill her destiny on a farm. But don’t get me started on this topic: I still have not entirely forgiven Dorothy Gale for giving up ruby slippers and emerald cities for Kansas dirt. There is one other element of interest in Young Lady—we get a small glimpse of a legendary Studio actress, Vivian Nathan, of whom there is otherwise very little film evidence, though she’s terrific in a couple of scenes as Jane Fonda’s therapist in Klute.

CK: Young Lady also has a very early screen appearance from Joanne Woodward as Stanley’s sidekick, but beyond that, it’s slight and forgettable. The Traveling Lady is a bit more substantial, and it finds Stanley reprising a celebrated stage role, as a young mother whose hopes of reuniting with her recently paroled husband are somewhat cruelly dashed. The abridged presentation also features Steven Hill and Robert Loggia, two of the Actors Studio’s most notable leading men, and Mildred Dunnock in one of her classic kooky-old-lady roles.

DF: The Traveling Lady is adapted here (and, I assume, considerably trimmed) from a Foote Broadway play that also featured Stanley. As you say, Cameron, it’s a more substantive work… and really, a more apt fit for Stanley, who I think is at her most luminous and touching. Foote is Foote, and so we get a fair amount of finger-wagging here, too—it mostly takes the form of decrying the family-destroying effects of Demon Rum. (I watched it with a cocktail in hand, and immediately had a refill when it was over.) But it’s effective in its way, and certainly shows Stanley in a good light.

CK: Equally good is Loggia as Stanley’s husband. He does his own bit of Method character work, grounding his wastrel ways in the experience of a tortured childhood. Hill is a touch starchy as the good-guy knight in shining armor, though his dark and handsome looks will certainly interest anyone who knows him primarily from his long-running stint on Law & Order. Stanley and Hill would ultimately end up on Broadway in A Far Country, after which he renounced the stage and returned to the Orthodox Judaism of his youth. That must have been some production.

DF: For all the hokum and technological limitations of these old TV films, I’m thrilled to have seen both of these—really thrilled, that I could see them through the magic of YouTube. In my younger days, I could not even have imagined that such seemingly lost treasures of another time would one day be streaming to my television screen! And speaking of treasures, there is at least one more Foote adaptation with Stanley that is preserved—Tomorrow, based on a Faulkner story, which I think is the best of the lot. Something for next time…