In I Can’t Imagine Tomorrow, we’re contending with Kim Stanley and the last gasp of the Method. 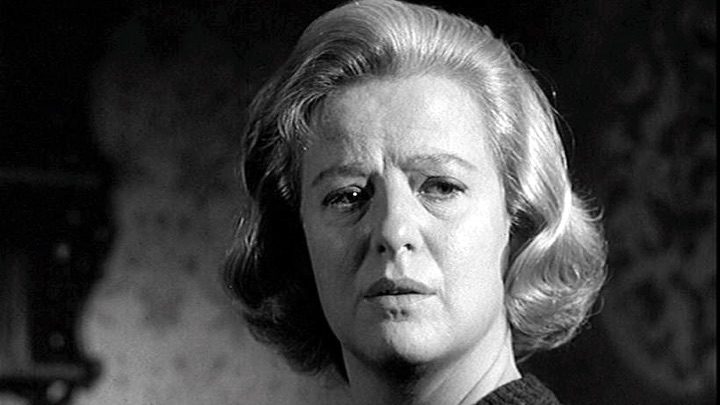 Cameron Kelsall: David, we’re going to talk today about Tennessee Williams and Kim Stanley. These are favorite topics, but also fraught ones. In both cases, it grows ever more difficult to separate their artistic magnetism from what we know about their personal lives—especially as we move into considering the latter parts of their careers. We recently watched Dragon Country, a 1970 evening of two television plays written by Williams, featuring Stanley and William Redfield in one (I Can’t Imagine Tomorrow), and the pairing of Lois Smith and Alan Mixon in the other (Talk to Me Like the Rain and Let Me Listen). Both playlets feature the hallmarks I associate with late-career Williams—a greater emphasis on character study than plot development; hazy allusions to his earlier, reputation-defining works; an undeniable frankness toward the sad fates of faded Southern Belles. But in I Can’t Imagine Tomorrow, we’re also contending with Stanley and the last gasp of the Method, don’t you think?

David Fox: In some sense, I Can’t Imagine Tomorrow—which can be streamed on YouTube—gives us a purer example of Stanley than Three Sisters or Cat on a Hot Tin Roof. Any sense of artifice is minimal; we feel from the start almost like voyeurs, given a bird’s eye view of her inner struggles. Here as always, Stanley’s translucency is almost shocking—really, it’s her particular genius as an actor. She’s always alive and unfiltered, reliably unpredictable, eternally fascinating. But it also forces me to grapple with a problem I’ve had for years with Method acting and its guru purveyors: why are we so fascinated by women in pain? And why is that pain—tears and loss—the ultimate triumph of the method actress? (I think it’s very much not the same thing for men, where rage seems instead the quality that’s most “real.”

CK: That’s an interesting question—especially since, when we get down to brass tacks, isn’t much of the Williams canon also about women in peril? Blanche Du Bois and Laura Wingfield are obvious examples, but is there a more febrile spinster on stage than Alma Winemiller? Or the faded, deluded beauties of The Rose Tattoo and Sweet Bird of Youth? In Suddenly, Last Summer, we have one woman literally in a mental institution, essentially let out of a straitjacket, and another who allowed herself to be pimped out by her son. Late-career Williams might show hysteria in extremis, but one could argue it was always there, though perhaps not as crudely overt.

DF: Stanley of course didn’t play all those roles, though she could and should have! But isn’t she fundamentally the poster child for the style? And if you think I’m exaggerating how fetishized this is, watch Rick McKay’s invaluable documentary, Broadway: The Golden Age, where a number of theater people speak reverently about her. As Rex Reed says, “Have you ever seen Kim Stanley in The Goddess? Well, you watch that movie again, scene by scene, and you will not believe the stuff she does. That’s the greatest performance that’s ever been captured on film. I’ve never seen a performance like that.” The visual that accompanies Reed’s comment is Stanley, in a famous scene from The Goddess, screaming “I want to die! I want to die!,” as she is dragged away from a graveside funeral service.

CK: That documentary also includes the only extant footage of Stanley in Bus Stop—ostensibly a comedy—in which she’s overly nervy and wounded. It’s fascinating to watch her voice and body almost quiver in unison, but to your point about voyeurism, you almost feel dirty the more she draws you in. Obviously, this accomplishes exactly what the Method sets out to do—capture a real-to-life moment and present it with an almost uncomfortable sense of immediacy. But those moments do seem to revolve around female suffering.

DF: That’s my point exactly! Immediacy and truth are, of course, laudable goals in the theater. But for women, why is this so often tied up in misery? Frank Langella‘s comments on Stanley are even more eye-opening: Staring into space and looking like he’s watching Christ rise from the dead, Langella offers this catalog of Stanley’s Greatest Hits (I transcribed it exactly, because I couldn’t quite believe it):

“If I could go back now, I would ask to go back to the theatre where Kim Stanley is playing in A Far Country, so I could see her say, ‘I can’t move my legs.’ I would go to the theatre where Kim Stanley was playing in Chéri, where I would watch her take a string of pearls and put them around Horst Buchholz’s neck, and hear her say, ‘This is going to be the last great moment of my life.’ I would want to see Kim Stanley open her eyes at the beginning of Natural Affection, sit up, look out, and communicate to me that she was living a life of incredible despair without ever having said a word. I would want to go and see her in The Three Sisters, say ‘I love… I love… I love Vershinin!…’”

CK: Ick. I’ve got a major case of douchebumps just reading that. I almost want to hand him a towel. It’s clear that Stanley, to a lot of her male colleagues, represented an ideal version of the distraught women. And if you know her biography, it’s hard to separate what we see on screen and her own personal tragedies. That feels all too relevant here, as she plays a middle-aged woman, identified in the script only as One, who seems to be on the verge of suicide.

DF: I Can’t Imagine Tomorrow (could there be a more Kim Stanley title than that?) belongs to the late-Williams world of fragmentary dramaticules that often take the form of two-person conversations. Largely free of any real plot, and seemingly suspended in a kind of dream-time, they nonetheless offer fascinating character studies of people on the margins. The description of the published Dragon Country collection, which also includes several more plays, uses this bleak catch phrase: “Dragon Country, the country of pain, is an uninhabitable country which is inhabited.”

CK: Indeed. The action, if you can call it that, revolves around an extended conversation between Stanley, who comes across as a mystery woman of property, and Redfield, a shy teacher who lives at a seedy motel. We’re meant to believe they’re friends—they play cards every night—and that they may be in love with each other. But in true Tennessee Williams fashion, happiness and fulfillment is unattainable. Really, it’s hard to picture anyone more effective in this milieu than Stanley—at 45, already looking unkempt and desperate, with a cascade of rapidly graying hair piled high on her head.

DF: Seeing her instantly evoked for me the image of Marie Antoinette riding off in a tumbrel to the guillotine.

CK: Stanley is no one’s idea of a subtle actress, but when paired with equally histrionic material, the marriage could not be more ideal.

DF: In fact, we’ve focused almost entirely on Stanley, who is certainly the marquee name here. But Redfield, in the more non-descript role, is a compelling and touching presence. (He died far too young only a few years later, having just completed his best remembered work, the film of One Flew Over the Cuckoo’s Nest.) Really, the acting across the board is quite extraordinary here—it’s difficult to imagine it better done, and the nuances of the relationship are delineated vividly. For me, 50 minutes of this kind of interaction is a bit more than I can take, though. On that level, I preferred the similarly themed, two-person conversation of Talk to Me Like the Rain, which was only 20 minutes.

CK: If you’re trying to work almost entirely on mood, shorter is better, I would say. I was interested, though, in how both plays take similar yet divergent views on female agency. To have control over yourself as a woman, they both seem to suggest, means to disappear into yourself. For Stanley in I Can’t Imagine Tomorrow, the way to achieve this is in death. For Lois Smith in Talk to Me Like the Rain, it’s disappearance. Williams supplies a spellbinding monologue for her about the joys of isolation and self-reliance, writing that echoes some of his most hypnotic early prose, and not nearly as overwrought as what Stanley has to say. It was fascinating, too, to see Smith so young and vibrant—she’s still going strong at 89, but I now associate her with “pillar of strength” roles like those she played in The Inheritance or The Trip to Bountiful.

DF: Well, we’re not yet finished with Williams, of course—nor with Stanley. Her oddly inconsistent career featured quite a bit of television, including several short dramas from the early TV Golden Age, by noted playwright Horton Foote. So this isn’t goodbye—merely au revoir…