Reducing Antony and Cleopatra to the status of mere mortals makes their torrid, tragic love seem rather ho-hum. 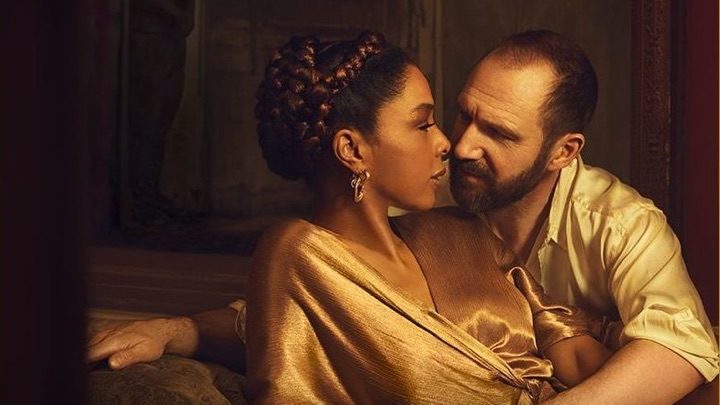 CK: To date, David, our ongoing critical series has largely focused on historical records of classic plays, often featuring the great actors of the twentieth century. This doesn’t mean there isn’t a glut of worthwhile contemporary content to consider. NT Live, the HD transmission arm of Britain’s National Theatre, has been streaming one production a week from its extensive catalog ever since the West End shuttered its theaters in mid-March. Productions become available on Thursday afternoons here on the East Coast and remain on YouTube for seven days. So far, the offerings have included James Corden in One Man, Two Guvnors, a swinging-sixties spin on The Servant of Two Masters; a deadly earnest Jane Eyre adaptation; and a Danny Boyle-directed take on Frankenstein with Benedict Cumberbatch and Jonny Lee Miller alternating roles. The production that interests me most, though, is a 2018 Antony & Cleopatra starring Ralph Fiennes and Sophie Okenedo as the warring lovers. What can I say? I’m a Shakespeare queen.

David Fox: I was delighted to learn that Simon Godwin’s lavishly-praised A&C (as we’ll call it for brevity’s sake) had been added to the streaming line-up, since I missed it both in the theater and via its HD-cast. Yet from the very first moments, it had the odd sense of déjà vu, which deepened as the show went on. The realization was undeniable that this production, though not credited, very strongly resembled one mounted last season by a formidable local company. I won’t name them here, but find the similarities problematic, to say the least. I reviewed that production, as I know you did, too, Cameron—and I also noticed from a tweet you sent that you too saw connections between it and the NT version we’re discussing here. Of course, this one has a level of resources—budget, as well as the kind of star-actors—that no local company in our area could equal. Yet for me, the problems I noted in our local production are similar to those I see here: notably, an overemphasis of the comic elements, and that by transposing the action to a contemporary milieu, we lose a lot of A&C’s mythos, mystery, and grandeur.

CK: I’m certainly not a strict traditionalist when it comes to the Bard—some of the best productions I’ve seen have been updated or set in indeterminate periods—but I do agree with your points here, and to me they represent a troubling yet pervasive approach to this material. I couldn’t count the number of stagings I’ve seen in the last decade that treat all of Shakespeare’s work as if it were bawdy comedy, no matter how inappropriate. And indeed, I shuddered when Okenedo (as Cleopatra) goosed her Act I speech (“O Charmian, where think’st thou he is now?”) as if she were on Saturday Night Live. The militaristic milieu of Godwin’s mise-en-scene had a distinctly Dr. Strangelove vibe to it. And yes, reducing Antony and Cleopatra to the status of mere mortals makes their torrid, tragic love seem rather ho-hum.

DF: I agree wholeheartedly with all three points here. There’s a comedic element in virtually all of Shakespeare’s plays, even the darkest ones—but over-pointing it as here doesn’t help. And I believe many of his plays—as with many operas—can yield new insights from rethinking periodicity. But I can’t think of any work more than A&C that does not benefit from it. These are historically real characters but very much part of a mythical past, which they would have been even in Shakespeare’s time. And the iconic sense that they are used in here—that kind of “grandeur that was Rome” idea—disappears when you put something on stage that looks like a fashion shoot. The minute Antony appeared in a Ralph Lauren sport shirt with snazzy coordinated harem pants, we’d left the expansive, mythical world forever.

CK: Indeed—and particularly within the realm of updated Shakespeare, isn’t Vague Military State especially overdone? I’ve seen it used, to varying degrees of success, in Macbeth, Hamlet, The Winter’s Tale, Romeo & Juliet and even in comedies like Much Ado or A Midsummer Night’s Dream. Godwin and set designer Hildegard Bechtler supply handsome furnishings, but by removing the work from its historical context, it loses so much of what makes it passionate, poignant and interesting.

DF: Your comment about the military look and feel links to what I think may be behind a lot of this style of Shakespeare: that is, an attempt to make the works more accessible, perhaps especially to younger audiences. I will give Godwin and his actors—most of whom are products of prestigious British training programs—that they parse the verse with maximum clarity, and the storytelling is easy to follow (no mean trick in A&C, which is pretty convoluted). But the costs are too great for me.

CK: Especially since in Okenedo and Fiennes, we have a potentially dynamite couple. His interpretation is more successful in general than hers, although he’s occasionally too outwardly louche. She, on the other hand, doesn’t fully hit her stride until Cleopatra’s final scene—it’s the first moment in a long evening when she doesn’t overemphasize the humor or the irony embedded in the text.

DF: In theory, these two are almost dream-team casting for me—fabulously gifted actors with impeccable technical skills, we-are-not-worthy good looks, and (cherry on top) charismatic together. I also think they’re both the right age, which is important—just beginning to age out of the prime of youth. But as you suggest, Cameron, I think it doesn’t quite work here. What I take away from Fiennes is a performance that would need little adjustment to fit into a more traditional A&C production—all the classical virtues, but nothing really individual to this particular world. Okonedo does more with the contemporary setting, but it’s hit and miss, and sometimes as you say, overemphatic. I’m not arguing that one of these approaches is better—I think there are arguments on both sides—but it speaks to the problems of time- and tone-shifted Shakespeare productions.

CK: Although neither quite live up to their potential, they’re both in a different league from the remainder of the supporting cast, which I found surprisingly weak in terms of individual characterization or interesting stage presence. Only Katy Stephens, as a gender-swapped Agrippa, did much that stayed with me (in a positive sense) after I finished watching. I will say, though, that while I found Tunji Kasim rather bland as Octavius Caesar, it was refreshing not to see the role conceptualized as a flagrant gay stereotype for once.

DF: For me, only one performance was truly misguided—Tim McMullan as a relentlessly nasal, smirkily “ironic” Enobarbus (this is another unwelcome character rethinking)—but none of the others registered much.

CK: A shame, because A&C really can be Shakespeare at its most beguiling, and there are scores of choice supporting roles for the right actors to shine in. That said, hats off to NT Live, which filmed the production so flawlessly that you really felt like you were inside the Olivier. It really is the theatrical equivalent of Met in HD broadcasts—and a complete 180 from another filmed production we’ve been sampling this past week, a low-rent capture from the eighties with Lynn Redgrave and Timothy Dalton.

DF: Way to bury the lede, Cameron—the Charmian is (wait for it…) Nichelle Nichols! And if that’s not enough, General Hospital fans will recognize a very earnest Anthony Geary (of Luke and Laura fame) trying his damndest as Octavius. The whole thing is kind of mind-boggling, a throwback to another era of Shakespeare productions where every scene is heralded with a trumpet voluntary, and every man throws back his cloak before speaking. But for all the corniness and hamming, there’s something immensely watchable about this. Redgrave goes for broke in the final scene—it’s too much, at least for television, but I’d also say there’s an audaciousness and variety in her performance that I miss in the much sleeker NT version.

CK: Readers, you can judge for yourselves which you prefer—NT Live’s A&C streams on YouTube through May 14, and the Redgrave version can be found there too (divided into multiple chapters). And for anyone who’s been following our ongoing Tennessee Williams conversations, here’s an exciting development: On May 21, NT Live will release its recent Streetcar Named Desire with Gillian Anderson as Blanche. We’ll surely have a lot to say about it then!