Gorgeousness is, of course, its own reward—and the movie of Cat on a Hot Tin Roof has many other pluses as well—but I do think Elizabeth Taylor's and Paul Newman's good looks pose an ongoing distraction. 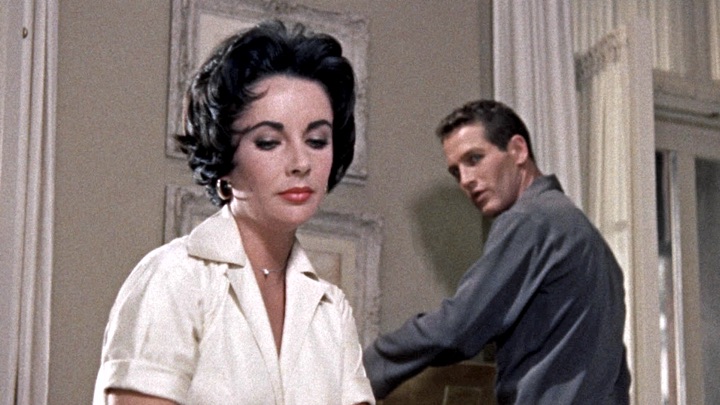 DAVID FOX: When I imagine my ideals of human physical perfection, two images that often come to mind instantly are, in fact, production stills from this film: Elizabeth Taylor, standing in her white slip and toying distractedly with a drink; and Paul Newman in pajamas, posed similarly. Has any woman or man ever been as beautiful as these two? I doubt it. Watching the movie again last night—for the first time through in a number of years—I literally gasped out loud. Gorgeousness is, of course, its own reward—and the movie of Cat on a Hot Tin Roof has many other pluses as well—but I do think Taylor and Newman’s good looks pose an on-going distraction. They are god-like, whereas Williams’ Maggie and Brick are attractive people beginning to age out of their youthful appeal.

CAMERON KELSALL: In our first dispatch about this play last week, I wrote about my feelings that Taylor’s beauty permanently altered our conception of Maggie as a sexpot—which seems to be borne out in the lineage of women who have played her on stage and screen since. Revisiting the film didn’t change that conjecture, although it’s interesting that, while most of the actors who’ve played Brick are handsome and rugged, that character hasn’t fallen into a similar conventional trap. That said, I was struck anew by how compelling Taylor and Newman are in their roles. To be honest, neither is an all-time favorite actor—he was so often awash in earnestness, and she frequently coasted on personality and looks—but here, they are devastatingly believable as two people who don’t seem able to exist with or without each other.

DF: Agreed—Taylor in particular. Really, with the possible exception of her Martha in Who’s Afraid of Virginia Woolf?, this is for me her greatest film performance. She’s truly a Maggie for the ages, finding exactly the right combination of sardonic lightness and emotional bite. Line after line, I thought, “yes—that’s it!” Her monologue here is, of course, significantly cut and rearranged, so as to make the screenplay more conversational… but she lands every point that Williams asks for. And she and Newman are also exceptionally good together (maybe their beauty reinforces that connection). He, too, knows how to keep it light while also playing the underlying pain. His explanation to one of the no-necks of why he was lying on the floor (“I tried to kill your Aunt Maggie, but I failed—and I fell”) had me laughing out loud. For Taylor and Newman alone, this Cat is a must-see, but actually every role here is done credibly or better. That’s almost unheard of in theatrical productions of the play. 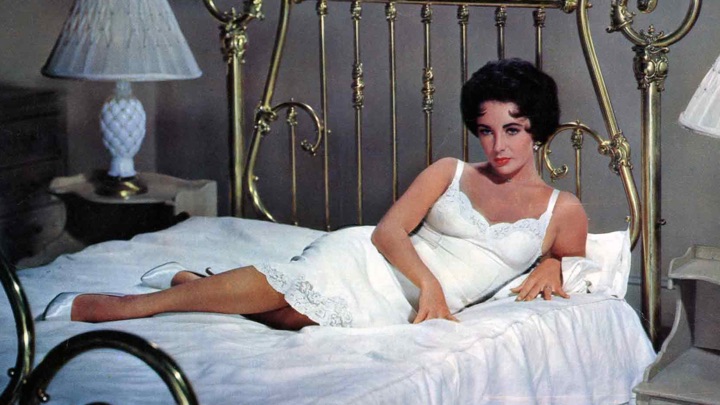 CK: For sure. I could quibble with a choice or two in each performance—Judith Anderson occasionally descends into great tragedian mode as Big Mama, Madeleine Sherwood sometimes overemphasizes the obvious as busybody Mae—but pound for pound, this is supremely accomplished acting by film performers who are totally at home in the medium. That is perhaps where this Hollywood adaptation diverges most from the other two we’ve considered thus far, which had a mixture of stage and screen actors at various degrees of comfort. Of course, Anderson was a formidable stage actress in her own right, and Sherwood originated Mae on Broadway—as did Burl Ives, the only other holdover, and truly definitive as Big Daddy.

DF: Ives is absolutely sensational, I think. Of course, his bigger than life physicality helps here, but the acting is also piercingly focused and potent. What an odd choice he was—surely far better known at the time for his folk balladeer persona—but it sure pays off. Sherwood has the impossible task of playing next to Taylor, which is compounded here when she (Sherwood) is deliberately drabbed-down, but I really like her vitriolic spunk. Jack Carson is another odd piece of casting—he was known for a kind of Film Noir-ish thuggishness, and that’s present here as well, but he does something more interesting with Gooper than I’ve usually seen, though he makes no attempt at an accent. Still, that’s probably better than we get from Anderson, whose speech regularly vacillates from the Old South to New South Wales. But as you say, Cameron, Anderson was a genuinely great actress—and what I do like about her Big Mama is that she’s more plausibly a Grande Dame with money than any other I’ve seen.

CK: I think something that often gets lost is that the Pollitts are nouveau riche, whereas Maggie and Mae come from well-heeled but comparatively modest “good” families. Ives and Anderson certainly put that across—neither is afraid to play crass when necessary. 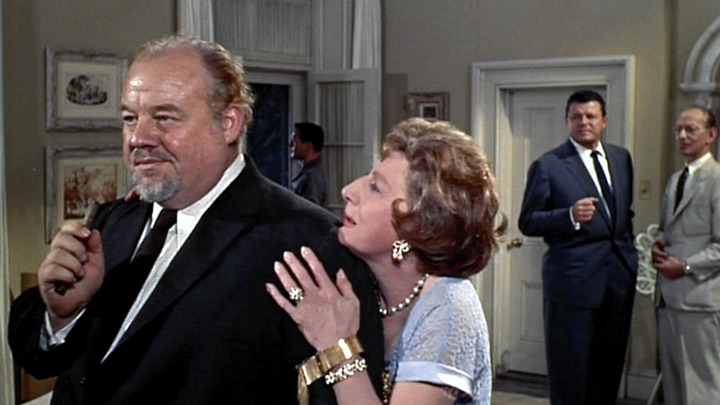 DF: Capturing the nouveau riche-ness is a key point, I think—and one that brings us to the inevitable ways in which Williams’ play is adapted here (by screenwriters Richard Brooks, who also directed the movie, and James Poe) for film. I’ve already alluded to substantial restructuring, and of course we’ll get to the cutting and censoring. But one common issue—opening up the action of what on stage is a single interior set—here is accomplished as well as I’ve ever seen it done. There are a few places where I even think it adds dimension.

CK: I was similarly struck by the smoothness with which Brooks and Poe achieve this, including moments that shouldn’t work but somehow do. It seems heavy-handed to actually see Brick jumping the hurdles on the high-school athletic field, pitching a bottle of bourbon into the stands like a pigskin, but it adds to the character’s aching awareness of loss and defeat. On a more comic note, watching Sherwood’s Mae conduct the parade of no-neck monsters in welcoming Big Daddy home reinforces their repulsiveness and the avarice at the heart of Gooper and Mae’s actions. It doesn’t hurt, too, that the art direction itself is a technicolor triumph—who wouldn’t want to see as much of that sweeping Delta plantation as possible?

DF: We’re certainly aligned on this point, especially how much the no-neck monsters register as… well, monstrous. A note I wrote last night as I watched: “The look of this film—the opulence, the questionable taste, the grotesque social striving, the awfulness of Mae and the children—registers here as it rarely does on stage.” (Though I’m not sure why ice cream here plays the role usually portrayed by a hot buttered biscuit.) You mention Brick running the gauntlet—an opened-up moment for me that similarly really worked was setting Big Daddy’s final scenes in the basement, where we can physically see the graveyard of Big Mama’s treasures extravagantly collected on an expensive but joyless European tour.

CK: What struck me about those final scenes in the cellar—part museum, part mausoleum—is that the campiness of the surroundings clash with the sentimentality imposed on the script. This is where the film adaptation goes somewhat awry. Williams’ gay story is not only censored, but straightened. There’s no mention of Jack Straw and Peter Ochello, of course, and no overt suggestion that Skipper and Brick are anything more than teammates and chums. (In fact, the crux of Brick and Maggie’s separation here is a perceived affair with Skipper that causes Brick jealousy.) But what I really can’t stomach is how Williams’ great exploration of mendacity and the rot that develops when you live a lie is reduced to a rather treacly, familiar examination of the fraught relationship between (heterosexual) fathers and sons.

DF: You’re absolutely right on all counts here, Cameron, and this is the heartbreaker for me about the movie. I’m sure in 1958 that the alterations were inevitable, but they’re also indefensible. This Cat could and should have been a textbook example of transitioning a play to a film brilliantly—and many of the individual elements are superb. But ultimately, in scrubbing the plot of the issues that, really, matter most, it becomes a non-starter, at least as an adaptation. I do think it’s a marvelous movie on its own—and I tell myself (maybe because I want to believe it) that if you know the play, you can read between the lines. But that’s just it—you need to know the play from the source.

CK: At the end of the day, I think we can be glad this version exists for its sumptuous decor and strong performances, and glad that the 1984 television adaptation we considered last time exists for its faithful rendering of Williams’ brilliant storytelling and command of language. There’s plenty of room on the roof for all these Cats.

DF: Hold on—I’m not ready for the day to end quite yet! Three Cats on film, but there’s still so much more to say, including (as with The Glass Menagerie) some fascinating if fragmentary evidence on YouTube, as well as memories of live productions both intriguing and bizarre (and sometimes both at the same time). I think a wrap-up is in store, don’t you?

CK: Hopefully by then, we’ll have heard that click.