Shirley Booth's Amanda reminds us again of her astonishing range, and truly unique (yes, a word I hate, but I mean it here) ability to mix heartbreak and humor in the same breath. 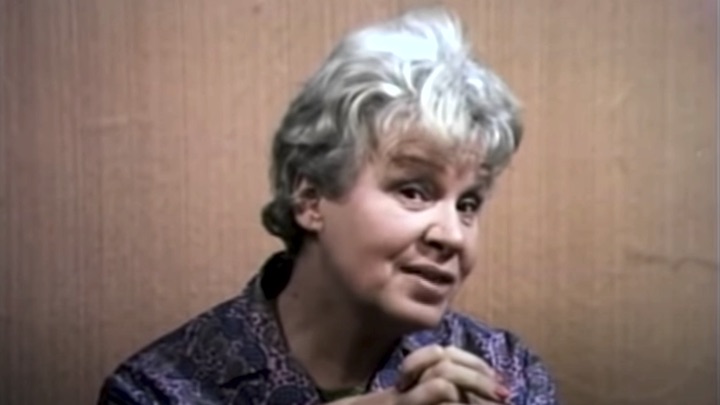 David Fox: Cameron, in our ongoing survey of Williams’ The Glass Menagerie on film, we now arrive at two productions done for television within a decade of each other, and in both cases, likely conceptualized specifically around the actress playing Amanda: Shirley Booth in 1966, and Katharine Hepburn in 1973. By rights, neither version should really be competitive with the feature films, which obviously had more time and larger budgets. But as with so much about this wonderful work, there are fascinating surprises in store. For one thing, the general limitations of TV production—even a certain stagey stiffness—actually suits the “memory play” aspects of TGM better than the more realistic movie medium. And if, in the end, neither of these versions completely works or rises to the top recommendation—for me, each has at least one disqualifier—each also has at least one superb element that I wouldn’t want to miss.

Cameron Kelsall: In a previous column, we spoke of the problems inherent in “opening up” a play like TGM, where the insular, almost hermetically sealed setting of the Wingfields’ tenement apartment exerts a literal and psychic weight on the characters. By necessity, neither television adaptation can really get away with doing that as the 1950 film adaptation—and, to a lesser degree, the 1987 follow-up—did. In the case of the ‘66 adaptation, which aired live on CBS, perhaps in a nod to the earlier genre of the teleplay, the performers and production crew were limited to a medium that forced them, for better or worse, to treat the experience as if they were performing the play. I think there’s a lot to be gained from considering it from that perspective.

DF: Booth for me the most compelling reasons to watch the ‘66 version. It was done the year after her long-run as TV’s Hazel, a role which brought her national fame as a comic actress, but also rather eroded the larger picture of her stage credits. Her Amanda reminds us again of her astonishing range, and truly unique (yes, a word I hate, but I mean it here) ability to mix heartbreak and humor in the same breath. I’m particularly struck by the off-handed way she delivers a line that still carries a scorpion sting: “Oh – a high school boy” to Laura is one such. Ultimately, this TV version isn’t an ideal vehicle for Booth, but I could imagine that—on stage, and with a different director—her Amanda might have equaled the legendary status of Laurette Taylor’s fabled creator performance.

CK: Booth’s ability to juxtapose sweet with sour—a style she perfected in Come Back, Little Sheba—suits Amanda particularly well. This is a character, after all, who needs to seem monstrous and girlish, sympathetic and manipulative, often in the same moment. There are many ways in which Booth isn’t ideal—it’s hard to imagine her ever as a blushing debutante…

DF: When she appears in her Blue Mountain gown—which here is, indeed, blue—I thought she was Merryweather in Disney’s Sleeping Beauty!

CK: … but she has in spades that one attribute Amanda prizes above all others: charm. I’d say she’s equally well matched by two of her three co-stars: Hal Holbrook, despite being somewhat long in the tooth, offers a satisfyingly gruff take on Tom. And Pat Hingle brings an ordinariness to the Gentleman Caller that I think is just right—he really seems like an ex-football star gone to seed, someone keenly aware that his glory days are in the past.

DF: I also found much to admire about Holbrook and Hingle. The former, more than any other Tom I’ve seen (including those on stage) actually channels Tennessee Williams’ sing-song Southern vocal inflections, and reminds us just how poetic the language is. In the case of Hingle, it’s so fascinating to compare him with other Jims. He seems to me more than a decade older than most—his high school days really a distant memory, clearly followed by a long rough patch! But as you say, his ordinariness is itself very touching. He’s one of the most sympathetic Jims I’ve ever seen, and that has advantages as well as disadvantages. Alas, speaking of disadvantages, we come to what for me is this version’s biggest weakness: the drab Laura of Barbara Loden.

CK: Loden was coming off her legendary performance as Maggie (the Marilyn Monroe stand-in) in Arthur Miller’s After the Fall on Broadway here. A few years later, she would direct and star in Wanda, a revered cult classic that some credit as the first “independent” film. By the standards of the role, she looks unbelievably stylish—in her first outfit, a cinched pencil skirt and tight cardigan sweater—she might be on her way to a poetry reading at the Village Gate. But really, there’s just not much there there in her interpretation, and the overall performance—one of the few she committed to film in her attenuated career—doesn’t supply much evidence of the brilliance that those who saw her onstage attest to.

DF: Agreed. Everything about Loden’s backstory, including her tragically early death at 48 from cancer, at just the moment her directorial career looked ready to take off, makes one want to find something special in her Laura, but really—I can’t. And you mention that she’s also impossibly glamorous—I was struck from the start by her model cheekbones. My first point of comparison was to Faye Dunaway in Bonnie and Clyde, who similarly is coiffed and styled with ’60s modishness. In fact, a consistent sense of period is almost entirely missing in this TGM more generally. The men look plausible for the 1930s, but virtually nothing else does.

CK: Yes—I would say that, in addition to Loden’s performance, the two major strikes against this production are the lack of period sensibility, and the series of cuts, likely imposed to fit into a television timeslot. But even with its deficits, I’m glad it exists… especially since, for decades, it was thought lost to posterity. Jane Klain, a dogged archivist at the Paley Center for Media, spent years searching for the master tapes, ultimately locating them among a collection of the producer David Susskind’s materials at the University of Southern California. The remastered print aired on Turner Classic Movies on December 8, 2016—exactly fifty years to the day since its first broadcast.

DF: I second the praise for Jane Klain, one of New York and media culture’s underappreciated heroes! And for me,  though it has other virtues, Booth’s performance alone justifies the White Whale search this involved.

CK: No White Whale search was necessary to locate Katharine Hepburn’s 1973 television version, which has been issued on DVD by Broadway Theatre Archive for over 20 years. That will be the subject of our next column. Stay tuned—and, as always, stay fresh and pretty for those gentleman callers!