The 1950 movie seems intent to turn the story into a screen romance, eliding or ignoring the play’s mournful tenor. 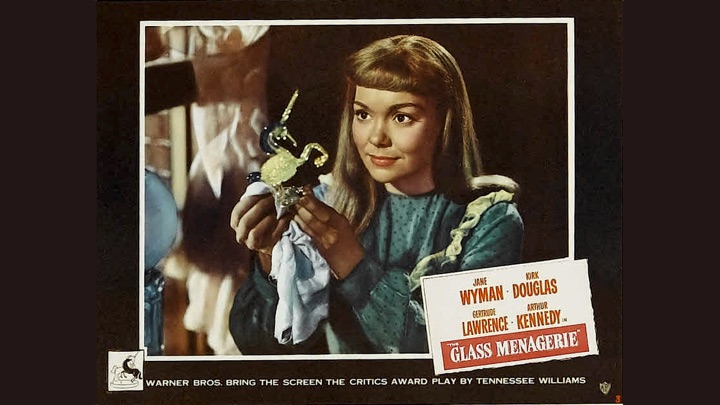 David Fox: Cameron, when we wrote about the works of William Inge, you commented that Picnic was your favorite American play. For me, it’s The Glass Menagerie, which I also consider, without any second thought, to be the greatest of all American plays (those two are not entirely the same thing). For both Tennessee Williams’ extraordinary command of poetry, and his profound—and profoundly sad—insight into the human condition, I think it has no equal.

Cameron Kelsall: I’ve probably seen more productions of TGM (as we’ll call it, for the sake of space) than any other American play—which speaks of the degree to which it’s produced and my willingness to revisit it as often as possible. Unlike Picnic, which I dearly love for its piercing straightforwardness, Williams’ breakthrough work lends itself to any number of interpretative lenses, and each encounter reveals something new and haunting to me.

DF: Yet perhaps inevitably, given its complexity, ambiguity, and slyness, while I’ve seen several good productions—some of them with truly great elements—I’ve yet to see one that finds everything I want in it. I continually fixate on some of the more darkly comic elements that I think Williams wants us to intuit, while never expressing them outright. This is, after all, a play that invites us from the first line to be aware that what we are seeing is sleight-of-hand rather than truth. So many directors seem to miss that—and without it, so much of the play is gone.

CK: Over the course of several columns, we’ll examine four filmed adaptations of TGM, each of which offers a particularly individual take on the text. (And note that all of these are available on YouTube.) I think it’s safe to say that while they all provide plenty to chew on, and occasionally get the material just right, none of these preserved performances manage to tick every box required of a truly successful production. 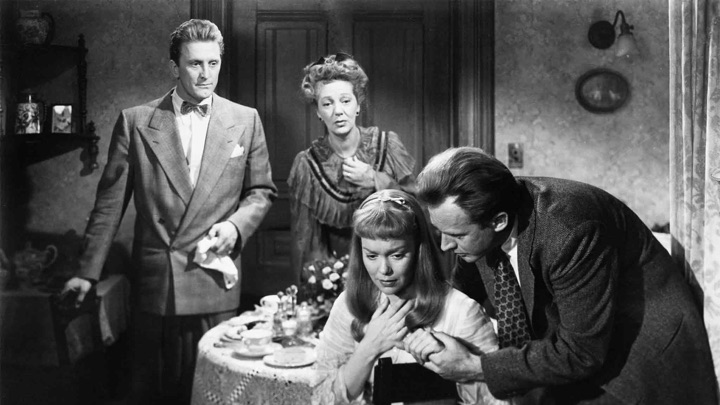 DF: Since we’ll be doing this in installments, I’m going to lay out from the start a couple of aspects of TGM that are crucially important to me. The first is that it’s the work of an openly gay playwright… and to me, a deeply gay play. The second, related point is the degree to which this is—and is not—autobiography. It’s very clear that the Wingfield family is modeled on the senior Williamses, and that Laura is based in part on Rose, Tennessee’s real sister. But Rose Williams’ actual story—that of a high-spirited girl “tamed” by her family through a prefrontal lobotomy from which she never recovered—is, for me, a key to understanding this far more lyrical fiction.

CK: I’ve always been interested by both of those elements—particularly the degree to which directors and actors interpret Laura as “crippled,” to use the play’s word. (The most recent Broadway revival, for example, featured an actress with muscular dystrophy who used a wheelchair and crawled around the stage on her hands.) Another question that relates somewhat to your original point about the story’s unreliability is how we’re supposed to perceive Tom’s abandonment of his family, and whether or not Amanda and Laura, in the play’s “present,” are alive or dead.

DF: I agree that all these aspects are very significant—just exactly how “crippled” Laura is seems to me a dramaturgical question that could take up weeks of discussion on its own. I’m also struck by aspects of the script that are virtually always ignored. Williams calls for “screens” with texts on them to be introduced at various points, often declaiming statements in a way that seems deliberately, even cruelly ironic. These were, by all accounts, abandoned after a Chicago tryout and before the show reached Broadway. I’ve never actually seen them used, but I think the Brechtian element is a fascinating idea—not least because in many ways, I see TGM as analogous to Mother Courage. 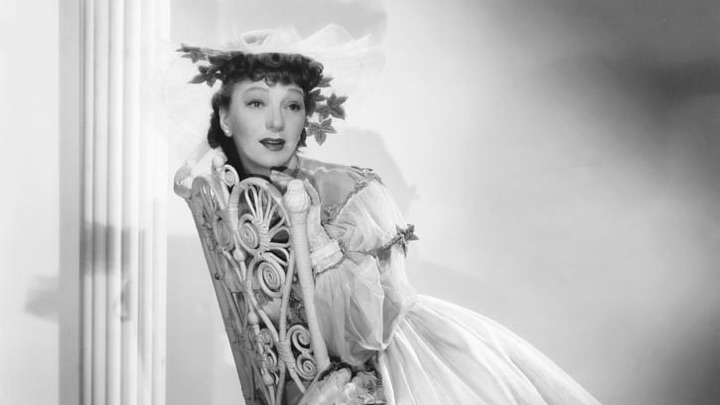 CK: John Dexter, himself a devoted Brechtian, restored the screens for his 1983 Broadway revival of the play, which starred Jessica Tandy (in her first return to Williams since originating Blanche in Streetcar). Of interest, another British director, David Leveaux, used a similarly ignored setting device for his 2005 Broadway production (with Jessica Lange as Amanda): certain “memory” scenes were played behind thin lace scrims that separated the present action of Tom’s narration and the imagined past of the ‘30s St. Louis tenement. We both saw the latter production, and I recall Leveaux’s decision to use the scrims garnered particularly negative reviews.

DF: I also remember the dismissive press, which in part I think represents a continuing prejudice that favors the notion of kitchen table realism as a core value in American theater. But whether or not the screens and scrims are used, I think it’s critical that TGM is not a work of realism—Williams (through his theatrical doppelganger, Tom Wingfield) tells us multiple times that what we are watching is “memory,” and not realistic. And rather oddly, this positions film—that is, feature movies—as a particular problematic medium for TGM, since film so favors a realistic aesthetic… and an almost universal solution in adapting American home-based dramas on film is to “open-up” the action.

CK: The first theatrically released adaptation, made just six years after the work’s premiere and co-written by Williams, definitely suffers from that impulse to fill in the details that occur beyond the play’s insular setting. The second, filmed in the late ‘80s and based on a stage production that originated at the Williamstown Theatre Festival, is almost slavishly faithful by contrast. I don’t think either approach works entirely. The 1950 movie, for example, seems intent to turn the story into a screen romance, eliding or ignoring the play’s mournful tenor. (A telling aspect: Jane Wyman, as Laura, receives top billing, followed by Kirk Douglas’ Gentleman Caller, then Gertrude Lawrence’s Amanda. Arthur Kennedy’s Tom comes last.) And to return to something you’ve already mentioned as a paramount criterion, even the suggestion of a homosexual subtext is gone. 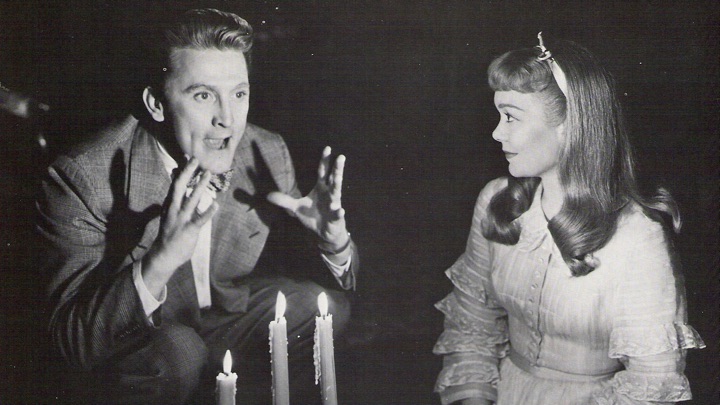 DF: Despite Williams’ participation in the 1950 movie, he famously excoriated the final product, as has almost every other critic and scholar. Certainly, any number of liberties here vulgarize the play in almost jaw-dropping ways. Two particularly garish examples are Jim taking Laura for a night on the town to the Paradise Ballroom, which elsewhere is seen as a site of Tom’s particular fantasies; and, of course, a tacked-on happy ending. Then, as you say, there is the relentless implication of Tom’s heterosexuality, starting with our first glimpse of him on a ship, participating in hearty stevedore-style duties. But while these and other aspects clearly disqualify this as something to watch if you want to understand the play, I also think there are some very strong elements and moments here that are absolutely worth watching and preserving.

CK: The script rewrites much of Tom’s opening monologue, which becomes less about the intractability of memory and more about the indignities of life as an enlisted man, and also shoehorns a scene where Tom tries to pick up a woman at a bar. Despite that, Kennedy’s performance is largely strong, once you accept that there is no possibility of reading this character as an authorial stand-in. Impressive, too, is Lawrence, scrubbed of any trace of her soignée Noël Coward heroines. She is believable both as a put-upon mother and as a woman who imagines a past perhaps grander than actual reality. And in what I think of as the test moments for Amanda—her confrontation of Laura at dropping out of secretarial school (“Deception, deception, deception!”), and her febrile preparation to receive the Gentleman Caller—she’s as effective as anyone I’ve seen in the role.

DF: There’s so little of Lawrence—one of theater’s greatest stars—that’s easily findable on film; for a chance to see her alone, this movie is worth watching. She got generally (and I think, undeservedly) negative reviews, but this may have had more to do with critics having seen the legendary performance of Laurette Taylor just a few years before. Taken on its own, Lawrence is one of the better Amandas I’ve seen, and she doesn’t shy away from the character’s less appealing traits. I also find Kennedy excellent, and here, too, the timing is interesting—this is just a couple of years after he created the role of Biff Loman in Death of a Salesman. TGM is also a very early example of Kirk Douglas, who even here suggests that he’s “going places.” The only real failure of a performance is Wyman’s beatific (and, to me, all wrong) Laura.

CK: Wyman won the Oscar for Johnny Belinda a year or so before this film was made; she was undoubtedly the most famous member of the cast at the time. (Another reason for her star billing, I’m sure.) She comes across as a limited actress, though again, I place some of the blame on the hamfistedness of the movie script. Much of the character’s power comes from her taciturn exterior, but Laura here seems like a pretty, bright young girl with a garden-variety overbearing mother. That’s not very interesting, is it? And could anyone make a line this cheesy work?: “Mother, I danced tonight! I danced for the first time!” It makes me sad to think Williams even wrote it.

DF: If he wrote it: screenplay credit is shared with Peter Berneis, and it’s nearly impossible to know who did what. Cameron, what you bring up here with Wyman is, to me, the core issue in TGM, and one I grapple with every time I see or read it. I think of it as “The Laura Question”— who, really, is she? The girl whom Amanda says has “a hardly noticeable… little physical  defect,” which is the only thing that sets her apart? Or is she the person that Tom describes in much stronger terms as “different” and “peculiar?” Or is she even closer to the real Rose Williams, whose defiance and rage were apparently so potent that a devastating surgical “cure” was deemed the appropriate action? And when you consider the options, remember also that Williams’ cautions us from the start to be aware that his play is sentimental memory, and not to be trusted as truth. Anyway, we’ll have three more opportunities to consider Laura… and The Glass Menagerie more generally. So stay tuned!