Bus Stop deals with uncomfortable questions of sex and longing, and it also examines a desire for human connection that often comes up short. 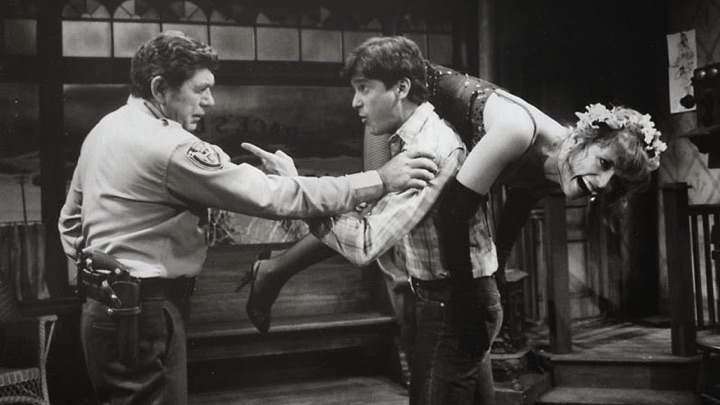 Cameron Kelsall: Bus Stop may have the greatest name recognition of William Inge’s major works, largely due to the movie starring Marilyn Monroe at her most ravishing. It’s a solid treatment, and Monroe is largely effective, but the Josh Logan-directed adaptation veers pretty far from the play itself. A more faithful filmed version can be found in a 1982 HBO special, captured before a live audience, featuring a particularly of-the-moment cast: Margot Kidder, Tim Matheson, Joyce Van Patten, Pat Hingle, Barry Corbin and Claude Akins, under the direction of Peter Hunt.

David Fox: I routinely teach the movie, which I think has many virtues, including what may well be Monroe’s greatest performance (and I say this as an admirer—I think she was an extraordinary film actor). This was my first exposure to Inge’s own script, and the differences are striking. One very significant character in the play—Dr. Lyman—is completely omitted in the movie, and with him go several major themes, including a pretty powerful evocation of creepy sexual lust. The secondary female role of Elma is more prominent in the play, and of course, it all takes place inside the diner. (One tagline in promoting the film had been to ballyhoo “two natural wonders of the world: the Rockies, and Marilyn Monroe!”) All of this is to say that this TV version is a valuable document to the canon of classic American drama.

CK: The play itself hasn’t entirely vanished—it was revived on Broadway in the ‘90s, starring then-lovers Mary-Louise Parker and Billy Crudup, and I saw a production at Williamstown Theatre Festival featuring a young Elizabeth Banks as Cherie. But although it forms something of a Midwestern triptych, along with Come Back, Little Sheba and Picnic, it seems that many consider it more lightweight fare than those other plays. I don’t agree: As you already alluded, it deals with uncomfortable questions of sex and longing, and it also examines a desire for human connection that often comes up short. Every character is a loner, thrown together by chance or circumstance (they’re riding out a snowstorm in that wayside diner), trying and often failing to get close to one another. The results are equally heartbreaking and relatable.

DF: I absolutely agree that Bus Stop as play has been unjustly dismissed—in fact, I’d argue that among the three major Inge plays, it’s the one that feels most at home on stage today, without the need for rethinking or backtracking. In part, this is also because it’s more successful as a comedy than either Picnic or Sheba, though as you say it also has many very serious themes that to me are also centrally Inge-ian. My guess about why producers avoid it has a lot to do with the movie, which on its own is pretty persuasive. I remember a sequence from Rick McKay’s wonderful Broadway: The Golden Age documentary, where the actor Farley Granger, in praising the original Cherie (the great Kim Stanley) dismisses Marilyn’s portrayal as imitation. I don’t think that’s fair—Monroe may have seen and internalized Stanley’s performance, but what she actually does very much makes Cherie her own, and particularly in the original scenes in the film, she’s dazzling. But Marilyn’s movie-star presence does marginalize the other characters—really, Cherie is meant to be a one member of an ensemble.

CK: For sure. Cherie on stage isn’t a star role, and although Kidder was unquestionably the most famous participant at the time this version was made, she mostly blends in with the rest of the cast. (In fact, her performance is at its weakest when she tries to insert some flashy, fussy business into her characterization.) Conceiving of Cherie as a star also butts up against the reality Inge works to create, which is that she’s a second-rate “chan-toosie” from the Ozarks. The play itself doesn’t really work if she’s dripping in glamour and individuality.

DF: Certainly Monroe’s beauty adds a problematic implausibility to the basic plot of Bus Stop. Kidder is really far more right—pretty rather than beautiful, with a streak of country naivete. But I think her relative inexperience as a stage actor shows, especially in the way she lampoons “That Old Black Magic”—Cherie may not have much talent, but she’s sincerely trying. On the other hand, the rest of the ensemble here is terrific. I’m particularly struck by some of the male actors, who really embody a very Inge brand of American macho roughness but with underlying pathos.

CK: Indeed. Matheson lacks a certain violent undercurrent as Bo, the cowboy who longs to make Cherie his wife, but he brings a welcome tenderness that suggests he might actually love her—instead of just wanting to possess her. Hingle is equally strong as Dr. Lyman, bringing just the right amount of self-pity and self-destruction. The character of Virgil, Bo’s traveling companion, is often treated as an older, fatherly figure; I found it quite affecting to have Corbin, who’s younger than Matheson, play the role as someone already rudderless and resigned in his youth.

DF: Hingle and Corbin are really about as good as I can imagine here. There is a kind of male character that Inge creates which cries out for actors like this, who really can embody a certain heart-rending ordinariness. Hingle has the particular challenge of a character who would be easy to find repellant, but he brings out the sympathetic side. As for the other two women, I know we both thought Van Patten was especially good—I also liked Marilyn Jones (Elma), whose work I don’t otherwise know.

CK: Van Patten’s Grace—proprietress of the diner and a self-described “grass widow”—is probably closest to the female characters you might expect from Inge if you know Picnic. Her performance is lively and funny, with an earthy sexiness, while still suggesting the same deeper well of loneliness with which Inge imbues all his characters. On the whole, you really need look no further than this adaptation to understand Inge’s particular gift for finely honed portraiture.

DF: The show itself is intriguingly odd. It dates from 1982, the fairly early days of HBO, part of a series (or maybe intended series—I’m not sure how many they actually did) of plays done in a specialized short run that was filmed for TV—Bus Stop in the rather unlikely venue of Claremont College in California. It’s a pretty rudimentary staging—I think I actually gasped that the credited stage designer is Boris Aronson, since the set looks not much more than community theater. But the whole here is greater than the sum of its parts, and very effective and affecting, I think.