A talent to a muse

The ballet I have grown to love, admire, and ponder the most is Stravinsky’s first collaboration with George Balanchine, Apollo. 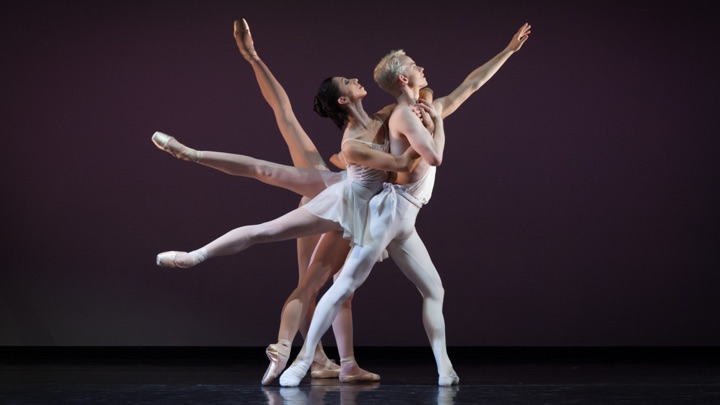 Last fall, I registered course that seemed as if it had been conceived for me. Across the upcoming spring, we’d explore many of the ballet works of Igor Stravinsky (both those written for dance and those later set to dance). Dissecting choreography, especially in dialogue with music, was a totally new challenge for me. I was so excited.

Indeed, the course actually ended up being conceived exclusively for me – I was the only person to register and the professor, who also ran the seminar I took on Sondheim that yielded the two-part discussion of Sondheim and Camp that ran here in 2018, offered to run it for me as an independent study.

So, for the past seven weeks we have been meeting regularly, talking about music, dance, and the philosophical questions that accompany them both. And as we have wandered through the oeuvre together, the ballet I have grown to love, admire, and ponder the most is Stravinsky’s first collaboration with George Balanchine, Apollo.

The story is slim – the Greek god of light, music, and poetry is born, is imbued with the spirits of the muses (only three, here: Calliope for Poetry, Polyhymnia for Mime, and Terpsichore for Dance) through a series of variations, demonstrates his learning in a pas de deux and coda, and is then called home to Mount Olympus, in a plodding yet tentative leave-taking.

I have spent the most concerted time with Apollo since I’ve been home. My final spring break from Georgetown began on March 6, and starting about midweek last week, day after day we received a new update about the University’s response to the evolving pandemic situation: the transition to virtual classes, the cancellation of long-planned performances this spring, and the final request to move out of on-campus residences by the end of March. My commencement, which would have taken place the third weekend in May, seems an unlikely afterthought.

The feeling of abrupt truncation, dislocation, and isolation is overwhelming and the goodbye to campus, to which I briefly returned to pack up my things, was more than that. A conclusion interrupted without even permission to hug goodbye, especially when there remained so much to be concluded.

For both composer and choreographer, Apollo was firmly a beginning. For Stravinsky, the collaboration was “among the most satisfying in [his] artistic life.” In Balanchine’s words, “Apollo was the turning point of my life. In its discipline and restraint, in its sustained oneness of tone and feeling, the score was a revelation. It seemed to tell me that I could dare not to use everything, that I, too, could eliminate.”

Their joint product, which premiered with the Ballets Russes in Paris in 1928, draws from the “ballet blanc” tradition (like Serenade later would and Act II of Giselle set the standard for). Its strings-only, neoclassical score, deliberated relationality of movements, and absence of traditional dance rhythms endow it with a cleanness and classicality that is echoed in its mythological subject.

Stravinsky biographer Stephen Walsh calls the ballet “immobility rendered mobile,” and dance scholar Stephanie Jordan elaborates: “what happens onstage happens as if frozen in time, as if the action has already taken place and is being recalled.”

The actions memorialized onstage unfold at the behest of the Muses instead of the god – it’s three goddesses reveal him, shaking and terrified, instruct him in their disciplines, and stand behind him as he responds to a full-orchestra call to new things that draw him away from a place of passive formation and seemingly towards a place of more active forming.

A hallmark of Balanchine’s choreography brilliantly illuminated in Apollo is the gradual creation of intricate poses that make dance out of transition and afford moments of visual stillness that exist both indifferent to and dependent on the music. With Apollo, he reworked both the beginning and end of the ballet numerous times, eventually eliminating the staircase Apollo and the Muses ascend during the valedictory ‘apothéose’ in favor of a group starburst pose at the end.

Balanchine starts the ballet’s final moment with a complex, intertwining series of poses that stretch across the stage. Whereas before there was instruction, now both the god and the Muses engage in a give and take. They implore Apollo to stay, but his summons is too urgent. Departing somberly, one by one behind Apollo, and stepping in time with the tremolo eighth-notes of the violas, they turn upstage, cross, and position themselves on Apollo who stands anticipatory and erect, center-stage.

With the last chord, they assume a final pose: Apollo leans forward on one knee and thrusts his hand out in both curiosity and fear. Terpsichore rests her entire weight on him, her left leg leaning on his right, and Calliope and Polyhymnia assume various heights of arabesque behind them, arms lowered.

The moment has a valedictory feel – Apollo’s teachers and their teachings cannot go after him, so they instead dissolve onto him. His final radiance, his turned-out reach towards what is to come, is made possible only through the profiles of the muses.

The prototypical college experience is one as holistically didactic and widely fabled as Apollo’s tutelage. Absorbing this piece during the sudden termination of many aspects of that experience for me and my classmates, I am reminded of how worthwhile everything that preceded it was.

The classes I went to, the people I met, the challenges, academic, personal, and creative, that I faced and surmounted are the Muse’s individual variations, Calliope’s Alexandrine step, Polyhymnia’s expansive dramatics, and Terpsichore’s quick-footed physicality. An undergraduate education is a vigorous, exhausting, exhilarating gestation born of happy circumstance that leaves you armored yet powerless when a call from Zeus comes.

As I begin my plodding, eighth-note step through the rest of the semester from the desk in my childhood room, the world outside looms larger, more intimidating, and more distant than it ever has. My muses – motivators, supporters, friends, mentors – are far away and when we eventually reunite, it will likely be in a physical and mental environment unlike any we have known.

I feel the grief of forfeited milestones play out in both logistical real time and in the sting of unresolved memories. The abruptness has set me marching uncertainly towards an uncertain destination and the people that taught me to stand are now suddenly imprints by my side. I reach out across a fermata, prepared yet not ready for the sudden change of light.