The three faces of Lisette

The season's second cast delivered a satisfying, if not transcendent, La Traviata at the Met last night as they struggled to emerge from piles of jewel tone brocade and gold filigree. 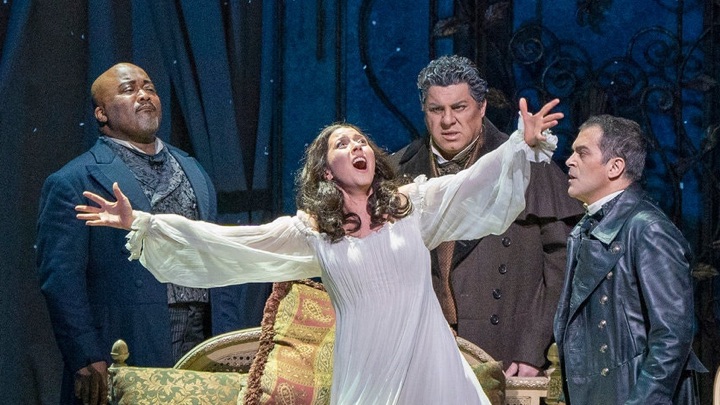 Lisette Oropesa made a compelling, if vocally uneven Violetta. She has a curious voice, with stunning point and presence in her middle range that cuts like an airhorn, and a shape-shifting timbre, sometimes dark and rounded, sometimes shimmery and gleaming, sometimes piercing and steely.

She never sounded bad—in fact, I liked her very much—but it was almost like I heard three different singers, depending on where we were in the score. Her high notes improve the quieter she sings, the last note of “Addio del passato” gloriously shaped, quiet without losing the body of the sound, while the C’s in “Sempre libera” (particularly the final one) sounded suddenly pinched, all squillo without the richness she delivered in her middle voice, or even in the first half of the aria.

She sounded better and better as the evening progressed, gaining a nobility and tenderness in the second act, and finally, delivering a moving third act.

Oropesa was hemmed in—along with everyone else—by the unendingly stupid blocking, a problem I only half-remembered from seeing this last year and which returned like a particularly humiliating Facebook memory on one’s newsfeed.

It seems like all the actors were told things like “umm…like, act drunk?” or “so, your key word is…sad” and then given some general locations to target. People just sort of wander about, run into things, and moving without much purpose. The few extremely choreographed moments stick out ridiculously.

I felt a truly painful surge of second-hand embarrassment at those awful little on-beat poses for the chorus. Yikes. All of this was true last year, but I apparently chalked it up to everyone still working out the kinks. Now I know that is what they were going for, so I can hate it more openly. 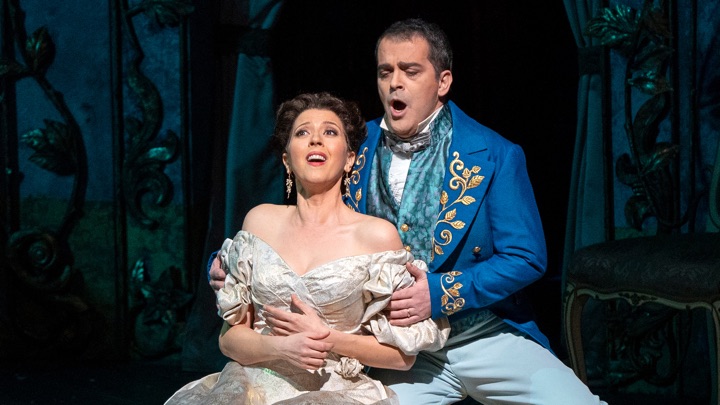 Like Loretta says when she first walks in to the Met, “Kinda gaudy, ain’t it?” Like most lines from the Moonstruck, it has proved endlessly useful, as nothing more perfectly sums up my feelings about the look and feel of this production. And this is coming from the lady who thinks the Vegas Rigoletto is a work of genius.

It looks a bit like Disney’s La traviata, the color scheme taken straight from the carnival scene in The Hunchback of Notre Dame. The symbolism is a bit too on the nose, the bed in the center in the room feeling somehow less subtle then the giant clock from the last production.

Oropesa was absolutely committed to it all, though, and did what she could vocally while angrily tossing a pillow and stripping her bed (rage chores!), stumbling around like she was a college freshman at a frat party, and, in the last act, literally throwing herself from bed to vanity in a desperate attempt to regain her strength. She was living too hard, apparently. Maybe try some counseling, V?

My main complaint lies however at the music stand of Bertrand de Billy, who insisted on slow-as-molasses tempi throughout and often did not catch his singers during their cadenzas, leading to a few awkward moments of scrambling, particularly in the duets (in the arias, Oropesa was certainly being clear about her tempi.)The rallentandos were a bit excessive for my taste, and the concertante at the end of Act II, basically my least favorite part of the opera anyway as it stops the action cold, felt particularly soporific.

Piero Pretti gave a serviceable Alfredo, a part that is woefully underdeveloped in the best hands. At his best, he produced a nicely balanced, clear tone without the “Kermit-y” timbre that can curse tenors singing Verdi. His “Un di felice” felt very slow to my ears and both he and Oropesa struggled at times to coordinate with de Billy in the pit (possibly through no fault of theirs), but that melody gets me pretty much every time (I always leave singing it), and I found little to dislike in him. He too improved as the night wore on, however producing some absolutely divine pianissimo moments in “Parigi, O Cara,” that made his artistry apparent and me sit forward to listen closer.

To me, the test of any Traviata is Giorgio Germont, everyone’s least favorite daddy. If Germont is lackluster, that second act makes me feel like I’m slowly losing my bloom to consumption. Luca Salsi did not disappoint, however, bringing the right touch of pathos to his flagrantly hypocritical character, and bringing a refreshing amount of dynamic control and contrast to the role.

He had the vocal power necessary to make him a formidable villain, with gutsy high notes and an iron edge, but tempered with a dash of sensitivity. Germont has to truly believe he’s right, even as he manipulates Violetta and his own daughter, whom he brings along as a pawn to parade in front of Violetta. Salsi delivered, making the second act move with a welcome energy. If I found his sforzandos a little over the top, at least he was doing something to break up the languor of de Billy’s tempi.