Over the past two decades, the understatedly beguiling Sasha Cooke has inched chronologically inwards in her subtle conquest of swathes of mezzo concert repertoire. 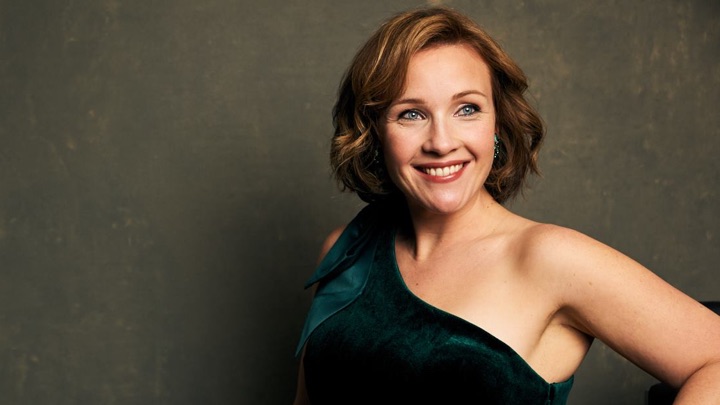 It was the twilight days of the summer of 2018 when I trekked into the historic center of Santa Fe to hear Alan Gilbert conduct the Schönberg chamber reduction of Das Lied von der Erde featuring Paul Groves and Sasha Cooke.

It was only after I arrived that I learned that Sasha Cooke, whose singing I had so admired before, had cancelled due to illness and would be substituted by Michelle DeYoung. While I have never quite gotten over that cancellation (though the concert, despite the power outage midway through, was still moving), what most struck me about Sasha Cooke’s intelligent and heartfelt Vocal Arts DC recital at the Kennedy Center with Julius Drake on Presidents’ Day evening was how sheerly healthy her firm, expansive mezzo is. To hear it compromised would be inconceivable. For me, it was worth the eighteen month wait to hear her again.

Over the past two decades, the understatedly beguiling Cooke has inched chronologically inwards in her subtle conquest of swathes of mezzo concert repertoire: from Handel to John Adams, her music making is intellectual but not dispassionate, considerate but spontaneous. And as she wields her substantial sound with both firmness and ease of filigree, she tees up her own sort of vocal poetry against that of the music and the text.

It’s an approach that has served her well in new works and Baroque music, but it was it was both a surprise and a delight to hear it excel and surpass equally in the most predictable lieder programming, Schumann’s Frauenliebe und Leben and the less popular Zwolf Gedichte von Justinus Kerner as well as Beethoven’s An die ferne Geliebte.

Maybe equally challenging in Frauenliebe is the 21st century need to dialogue with fawning texts from the point of view of a woman about maidenhood to widhowhood and everything in between that are as old-fashioned as they are sincere. The narrator yearns to “discover [herself] transfigured in his reflective glory” – hearing this Schumann setting of Adalbert von Chamisso’s cycle in 2020 can maybe even be eye roll reducing. However, Cooke’s approach was one of emotional primacy over character.

The enthusiastically insightful narrator faded away in favor of emotional highlights: long, easy phrases of longing emerged in “Seit ich ihn gesehen” as did the delicate licks of “Er, der Herrlichste von allen,” the svelteness of her voice unimpeded by its plushness and grandeur. In fact, maybe most admirable about her Frauenliebe was her reliance on the characteristics of her own voice to bridge those narrative gaps.

Much of the meditation on woman-ness was sung in a direct, youthful straight-tone, in contrast to the other two cycles, highlighting dissonances in both the music and its union with the text. She selectively mined the natural grain of her center range for an emotional and personal affect.

The characterless approach made the sincerity of songs like “Süsser Freund, du blickest” and “Nun hast du mir den erste Schmerz getan” even more grave and the peels of joy of “An meinem Herzen, am meiner Brust,” with each couplet tossed off in single breaths, all the more ecstatic. Drake’s accompaniment throughout was ponderous without being maudlin, though his lingering in the concluding solo was just nearly too drawn out.

Naïve straight-tone dialogued with the emotional quiver of an unfettered (but unobtrusive) vibrato through the subsequent ferne Geliebte. In this through-composed song cycle of longing, knit together now with an efficient meticulousness by Drake, the approach was more text-based but never less musical. In fact, as the faraway love is admired across nature, Cooke’s voice seemed to extend over the described landscapes.

An idyllic “Wo die Berge so blau” never lost its awe-inspiring effect even as the voice slimmed to a pleading whisper. The voice moved throughout with ease and simplicity. The aspirated ‘t’s in the concluding “Nunn sie hin den, diese Lieder” might have felt like overkill from a less restrained singer but here felt absolutely emotional and necessary as the narrator sends the songs into the world as a closing congedo.

Before starting in with Justinus Kerner, Cooke took a moment to explain, like she did also before beginning the Beethoven, the significance of the upcoming Liederreihe (“row of songs”), lauding its more piecemeal approach in an increasingly poignant (and gloomy) exploration of human emotions.

Indeed, the 12 settings of the poetry by the physician are characterized from their pluralism of voices: people in despair, thoughtful wedding odes, heavy-hearted drinking songs, odes to nature, love songs, and more. Sonically knit together in a succession of flat keys, the songs enjoyed the interpretative breadth of Cooke’s capabilities here. “Stirb, Lieb’ und Freud!” traced an arc from magisterial to vacant as the song’s virginal bride denounced her own wedding in favor of becoming a nun, the narrator’s reticence at her decision emerging in Cooke’s pungent overtones in her lowest register.

“Auf das Trinkglass eines verstorbenen Freunder” was also notable if just for the way Cooke animated the words, “Ernst tönt die mitternächtige Stunde,” evoking the very same clock she was describing. And as she moved into the row’s final three songs, its most poignant meditations on death and dying, the sadness was palpable not only in slow and even delivery of the songs, but by how Cooke more than once wiped her eyes throughout.

The emotional sincerity and unity she afforded to what is, admittedly, a wide-ranging collection of songs contrasted intelligently with the cycles of longing that preceded the intermission. She bookended the evening of German Romanticism with Schumann’s lusty “Hinaus in’s Freie!” and “Des Sennen Abscheid,” an elegant conclusion to an evening that found her in as fine voice as she had started it.

If the concept of ephemerality as we encounter it in the performing arts has me somewhat fatigued these days as I consider my own future, the ever-changing simplicity of an accomplished and detailed Lieder recital proved both a familiar refresher and a new meadow to wander in. May we all find such repose and inspiration.