By an astounding coincidence, on Monday night Handel’s third and fourth extant operas were being performed simultaneously across the street from each other at Lincoln Center. 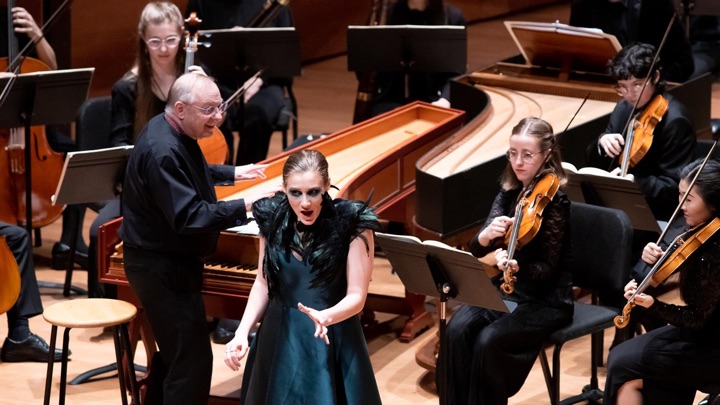 Juilliard Opera’s Rinaldo and the Met’s Agrippina though could hardly have been more different: the former—a spare concert-staging cast with students—often proved more appealing than the starry overblown extravaganza that opened two weeks ago at the big house.

Although they premiered scarcely a year apart, the two works are quite different. The composer’s operatic farewell to Italy, Agrippina tells a biting tale of corrupt political ambition and distracting licentiousness while Handel introduced himself to London with a lavish spectacle of the triumph of high-minded Christian heroism over pagan passion. Despite their marked differences, there are considerable musical resemblances.

Handel was an inveterate borrower both from others and from himself. Quite a few numbers in Agrippina were adapted from the rich bounty of cantatas and oratorios that he wrote earlier in his Italian sojourn. Rinaldo too includes music first heard elsewhere including Almirena’s catchy “Bel piacere” which Poppea sings (to a different text) in the third act of Agrippina.

One marveled again and again on Monday at how Handel had pulled out all the stops for his London debut. His canny curation of the best older pieces (he was just 26 at the time) combined with bewitching new creations like Almirena’s bird-song “Augeletti” with its trilling recorders and the stirringly martial “Or la tromba” accompanied by four trumpets so won over English audiences that his days as an itinerant composer came to an end.

No doubt Rinaldo’s cause was furthered by the spectacular stage effects necessary to tell the story of the victory of the Crusade’s soldiers against the Saracens drawn from Tasso’s Gerusalemme liberata. However, one had to take 11th century Jerusalem on faith as Juilliard’s presentation at Alice Tully Hall featured no sets and just four chairs arranged on an otherwise bare right-hand half of the stage. 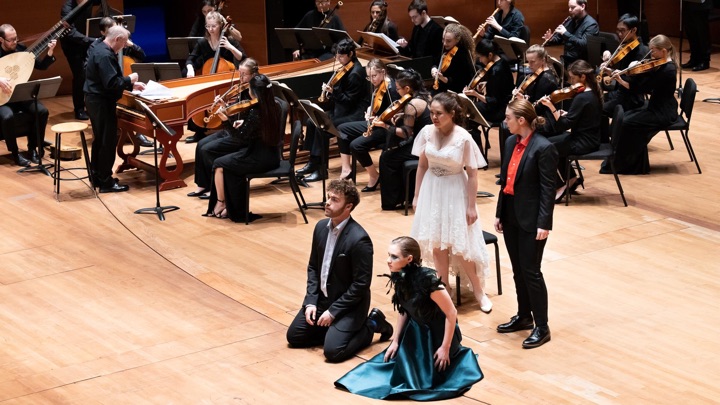 Ophelie Wolf’s simple, tasteful direction did effectively present the action and left her six singers to tackle their demanding arias with a minimum of the distracting stage business one often encounters in Handel productions.

The conservatory’s period-instrument ensemble Juilliard 415 occupied the left portion of the stage and was conducted by veteran Nicholas McGegan. The orchestra, though able, made less of an impact than it had in the fall performing Telemann under Masaaki Suzuki.

A leisurely McGegan elicited a warm rather than a bracing reading, and the young musicians eagerly complied although string intonation occasionally wandered as the evening progressed. His singers showed a firm grasp of the style and their crisp and intent delivery of the important recitatives, accompanied by McGegan himself and his crackerjack continuo group, demonstrated laudable preparation.

The pleasingly apt ornaments added to the da capo arias consistently played to the singers’s strengths rather than sending them out of their comfort zones as occasionally happened at the Met.

Rinaldo’s villains ruled the evening: while Jessica Niles’s fiery emerald-green-clad Armida may not have won the hero’s heart, she handily stole the lion’s share of her audience’s applause. Before she had even sung a note, her supremely bold stride onto the stage announced that she intended to rivet our attention.

Her glittering entrance arioso “Furie terribilli” revealed a bright and steely sound that melted movingly for her broken-hearted “Ah! crudel.” In the subsequent flashy “Vo’ far guerra” Jacob Dassa coped admirably with the near superhuman demands of the lengthy harpsichord cadenzas that sometimes overwhelm the aria. Niles who made a splash last year when William Christie conducted Juilliard 415 in Handel’s Aminta e Fillide, again revealed she has star quality in spades.

Eric van Heyningen brought a bold slightly burly baritone to Argante, her temporarily straying co-conspirator. He mooned touchingly over the steadfast Almirena but he was clearly made for Armida as his lusty duet with Niles, “Al trionfo,” turned out to be the evening’s surprising high point.

As Goffredo, head of the Crusade and father of the heroine, Maggie Reneé Valdman’s suavely forthright and impressive mezzo made her character far less of a distraction than he can sometimes be: the character of his brother Eustazio was entirely omitted from the sensibly abridged performing edition Juilliard used. More than once I thought Valdman might have made quite a worthy Rinaldo.

But, alas, Rinaldo’s hero and heroine were, on the whole, less satisfying. Hyoyoung Kim’s frustrating Almirena alternated lovely blooming phrases with wiry ones and pitch issues marred her otherwise affecting “Lascia ch’io pianga.” Whereas Niles and van Heyningen brought a combustible chemistry to the bad guys, both Kim and Karin Osbeck, her blandly earnest Rinaldo, suggested they were affable acquaintances rather than legendary lovers fated to be reunited.

The miscasting of Osbeck, amiable and lightweight instead of frank and potent, left a hole at the center of the enterprise. While her lament “Cara sposa” went nicely enough, she was overmatched by the bravura demands of “Or la tromba” and both her second-act arias were slashed to just their first sections. Both her and Kim’s occasional unsteadiness intruded when a consistently firmer sound was needed.

While it’s always nice to encounter Rinaldo, this was the third time it has been performed here over the past 4 years.

How about one of the Handel works we never hear locally like Ottone or Poro, for example?

On May 30 these forces reconvene in Germany to present Rinaldo as part of the centenary celebrations of the Göttingen Handel Festival.

At the end of this month Agrippina will be shown in theaters across the world in HD.