At the Metropolitan Opera on Friday night, an otherwise undistinguished Traviata was salvaged by an astonishing performance from Aleksandra Kurzak, whose Violetta was an incontrovertible triumph. 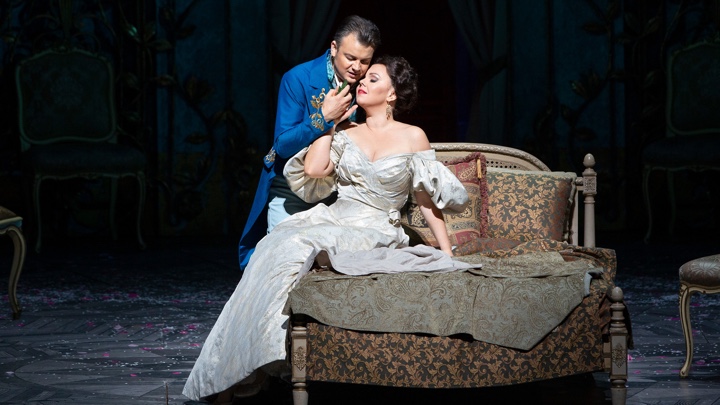 Indeed, Kurzak is about as close as you can get to a perfect Violetta, both vocally and dramatically. Her greatest strength lay in her middle register, which was rich and supple throughout, a powerful asset in the long middle-voice passages of the second act. Indeed, Kurzak’s coloratura only got more potent, more accurate, and more expressive the lower it sat in her voice, demonstrating that some of Violetta’s most impressive vocal acrobatics lie well below the top of the staff.

This breathtaking middle register was underpinned by a firm, sinuous chest voice, capable not only of great clout, but also of startling clarity. Her high register was not quite so powerful, but it was white-hot in tone, and extremely pliant, allowing Kurzak to color the tops of phrases with astounding effect.

Indeed, although the role’s tessitura might sit a little high for such a dark, weighty voice, Kurzak made up for this with the sheer control she was able to exert over the upper register: she executed a number of perilous – yet utterly ravishing – pianissimos at the very top of her range, notes that a less accomplished soprano might have been tempted to scream.

Kurzak was capable of smoothly traversing these various registers, despite their distinctive timbres, making for a performance that was both even in quality and full of color. She brought Verdi’s score to life with remarkable artistry, finding so much vitality and variety in every meticulously shaped phrase.

Indeed, Kurzak made a number of bold (and intelligent) interpretive decisions that cast the role in an entirely new light: in the “Brindisi”, for example, she brought excitement to this all-to-familiar tune with moments of hushed, playful pianissimo that recaptured all the magic and subtlety of the number.

Kurzak carried all this energy, nuance, and imagination through to her characterization of Violetta, painting a vivid image of Verdi’s complex and multifaceted heroine through subtle and shifting shades of emotion.

Her performance was once larger than life and heartbreakingly real, with Kurzak often sacrificing vocal allure in favor of dramatic expression. I was particularly struck by the raw anger which she brought to the second and third acts: Kurzak made it clear that her Violetta was not going to give up Alfredo without a fight, spitting venom in the face of Germont’s callousness and cursing her ailing body in harrowing, wailing tones.

In a performance that was so uniformly excellent, it is difficult to pick out highlights. Kurzak’s “Ah fors’è lui… Sempre libera”, however, was a tour de force: the cantabile was poised and elegant, phrased in broad, lyrical arcs; the intervening recitative included some of the most thrilling coloratura of the evening (the runs on “gioir” were understated but impeccably executed, a treat for the ears); and the cabaletta was absolutely electric, brighter and more muscular in tone, alternating between an assertive chest voice and sparkling coloratura.

Despite a late and breathless entrance on the final “il mio pensier”, Kurzak ended the aria on the high Eb, which was sustained with a gripping delicacy. Kurzak almost outdid this performance, however, with a heart-in-the-mouth rendition of “Addio, del passato” in Act III: here, Kurzak’s Violetta seemed defiant in the face of death, her “della traviata sorridi” surging with passion and warmth.

Although Kurzak’s Violetta was the undeniable highlight of the evening, her performance wasn’t flashy or showy in a way that outshone her castmates, but generous in a way that elevated her colleagues’ performances to a higher level.

Quinn Kelsey’s Germont, for example, was rather staid in his interactions with Dmytro Popov’s Alfredo, delivering a gruff and ponderous “Di Provenza il mar” that failed to capture the beauty of his sweet, seaside idyll. However, in the preceding scene, he was utterly mesmerizing in his confrontation with Kurzak’s Violetta tempering the role’s lyricism with a sharp, brittle edge, his manner cold, brutal, and unforgiving; belying Germont’s gentlemanly sentiments was a snarling, grainy voice topped off with a menacingly sweet high register.

Popov brought a sugary, dulcet sound to his Alfredo, although his performance often felt a tad muted. His high notes were often undercooked and lacked the kind of seductive squillo and raw passion necessary to make his courting of Violetta believable. Popov’s “De’ miei bollenti spiriti” was beautifully rendered, but failed to capture the vigor and optimism of Alfredo’s resolve; although Popov took the high C at the end of the cabaletta, its impact was deadened by a lull in dramatic tension earlier in the aria.

Yet Popov’s performance was solid and reliable throughout, exhibiting an evenness of tone undergirded by a balanced bel-canto phrasing. In duet with Kurzak’s Violetta in Act III, his performance was greatly heightened, and the two achieved a gorgeous blend on the dual cadenzas.

The supporting roles were all superbly sung: Trevor Scheunemann’s booming Barone and Megan Marino’s spunky Flora brought plenty of life to the crowd scenes, while Maria Zifchak’s Annina had a maternal warmth and a round, resonant sound to match. Sadly, the chorus scenes lacked drive, and, although “Si, ridesta in ciel l’aurora” had plenty of bite, the chorus seemed altogether subdued through the majority of the first act.

Karel Mark Chichon’s conducting was also a mixed bag. On the one hand, tempi often felt a little lugubrious, particularly in the first two acts, and I yearned for more fire and crispness in those rare moments in which Verdi places his orchestra in the spotlight. Occasionally, the orchestra and the singers didn’t quite seem to be on the same page, and tempi often sounded as if they were being negotiated in the moment.

The third act, on the other hand, had a forward momentum that the first two acts lacked, and played more into the timbral variety of Verdi’s score: the violin solo which accompanies Violetta’s letter reading was lush and velvety, while the brass chords which interject during “Se una pudica vergine” were mellow and tender.

Michael Mayer’s aggressively floral production is an assault on good taste and one of the worst aesthetic abominations I’ve seen this year (and I’ve already seen Cats: The Movie). Christine Jones’ set looks like a rococo nightmare, with gold rocaille ornamentation which engulfs the turquoise walls, and an open ceiling which (bizarrely) snows on the dying Violetta. Susan Hilferty’s garish costumes look like the offcuts from a 2000s made-for-TV Disney princess movie, all cheap brocade and clashing complementary colors, which, at their worst, pair a bright orange jacket with an acid green waistcoat.

It is as if Mayer’s production is tries so hard to be campy and yet somehow fails so miserably, succeeding only in being brash and tawdry. In the party scenes, the chorus undulate awkwardly in the background while Violetta is hoisted aloft precariously in a series of stilted and uncomfortable lifts, creating an atmosphere that is more terrifying than fun.

Yet this far from the worst choreography in production: the matadors of the third act (shirtless, of course, with alarming gold codpieces) perform a grotesque spectacle of bopping and gyrating, as if Richard Simmons had choreographed the Rite of Spring.

In possibly the most baffling directorial choice of all, Mayer adds a new character to the opera, Germont’s daughter, who, dressed as Little Bo Peep, does little but stand around awkwardly in the second and third acts as the other characters sing.

Yet, with such an outstanding Violetta at the helm, it was so easy to overlook the worst excesses of this production: Kurzak’s performance alone made for a deeply gratifying, and, indeed, unforgettable operatic experience.