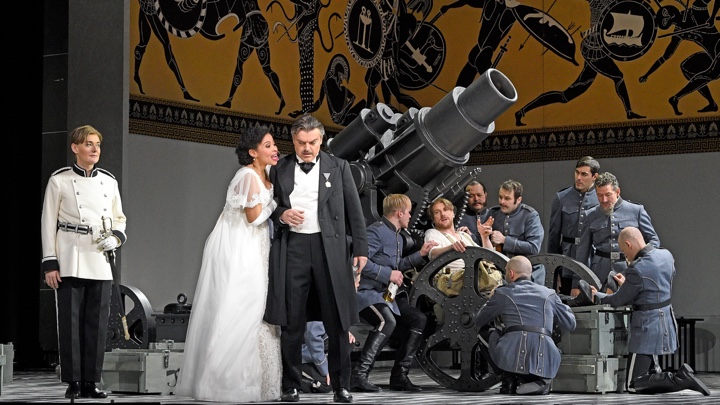 Ordinarily after a Der Rosenkavalier premiere Met audiences would be buzzing about its three leading ladies but on Friday the rain-soaked chatter likely was all about the boys: Günther Groissböck’s ridiculously entertaining Baron Ochs and Sir Simon Rattle’s enthralling conducting soared highest during a mostly excellent Richard Strauss evening.

Not that the Marschallin, Octavian and Sophie were problematic, but none reached the high standard set when Robert Carsen’s updated production premiered in April 2017.

Much of the pre-performance buzz naturally focused on the Met debut of Finnish soprano Camilla Nylund who has maintained an important international career for nearly two decades but hasn’t yet sung much in the United States. On Friday, she initially made an unimpressive impression but gradually rose to her much-coveted role’s challenges especially in a gripping account of the post-levée monologue.

Looking matronly and generally uncomfortable, Nylund hesitantly dove into her post-coital snog on the carpet with Octavian. Her somewhat coolly colorless soprano tarnished at the top but had considerable presence in the crucial conversational interchanges with the invading Ochs.

Once she changed out of her dressing gown and dismissed her entourage, Nylund’s Marschallin was magnetic during her wonderfully introspective and moving musings on love and aging. “Da geht er hin” could have been written for her as it sat perfectly in her voice’s sweet spot: a ripe middle register. Although above mezzoforte her high notes remained pressed, she managed a lovely soft “silberne Ros’n” just before the curtain came down.

When she reappeared at 11 o’clock (indeed, it was just around that time when the Marschallin made her grand re-entrance after having been absent from the action for nearly three hours), Nylund, sounding rough and pushed, needed to warm up once again. However, by the celebrated final trio she had again found her best form. 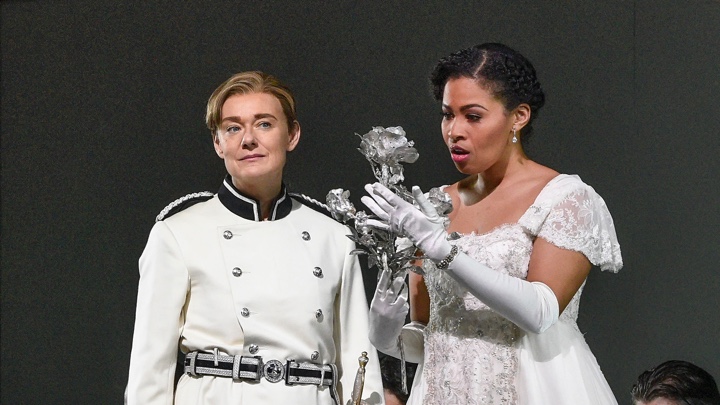 Though she is just five years senior to Magdalena Kozená (Octavian), Nylund very much came across as the “older woman;” well into middle age so her dignified response to her young lover’s eventual leaving was full of rueful resignation. She evidenced no anger or bitterness but a gentle, almost maternal regard for both Octavian and Sophie.

All in all, hers was a successful debut although not most distinctive nor memorable Marie-Thérèse seen at the house. One wonders if she’ll stick around or vanish as Angela Denoke did after her Marschallin debut in 2005, returning only just this year.

Nylund’s serene self-possession contrasted strikingly with Golda Schultz’s hyperkinetic Sophie, all flustered anxiety and sputtering nervousness. Her securely silvery and soaring ingenue came as a relief after her unsteady Clara had marred the Met’s new Porgy and Bess on opening night.

Rather than the angelically pure voice of Erin Morley who sang the role two years ago, Schultz’s soprano displayed a shimmery vibrato that mirrored that of Kozená so their frequent duets had a ravishingly entrancing simpatico.

While the Czech mezzo has long shone in 17th and 18th century works, Kožená’s excursions into later opera haven’t always been so successful. Her first Octavian in Berlin a while ago was not that well received and although there were happy moments in her brashly ardent performance Friday—a Met return after an absence of nearly a decade—it must be said that she and Strauss’s title character were not a good vocal match. 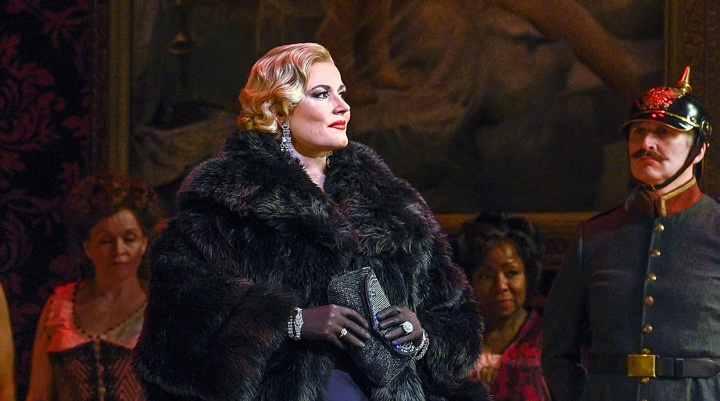 Yet despite these ladies’s excellences, it became nearly impossible to attend to them when they were sharing the stage with Groissböck’s extravagantly-drawn Ochs, a remarkably successful revisionist interpretation that may for many forever change their idea of the character. More often than not seen as a florid aging, often rotund fop, Ochs can be easily dismissed as a rival to Octavian. Yet the charismatic Austrian bass-baritone’s relatively young, handsome and virile Baron presented a real danger—at least until he is put to the test when of course he hilariously wilts.

Rosenkavalier might be the most frustrating opera in the standard repertoire in its juxtaposition of the most sublime music with some of the most tedious. And much of that tedium involves Ochs and his extended flights of braggadocio. Yet one of the gifts of Carsen’s reimaging and Groissböck’s bravura impersonation is that the unimaginable occurs: one truly misses Ochs when he’s not around. Perhaps Groissböck was not in as refulgent voice Friday as he was at the 2017 premiere but his remains a vividly and truly sung must-see portrayal.

Repeating his preening divo shtick, Matthew Polenzani proved less impressive as the Italian Singer than previously, but debuting as Faninal, Markus Eiche entered like gangbusters heroically announcing his presence like Donner with his hammer.

Also making his first Met appearance, Thomas Ehenstein made a younger-than-usual Valzacchi, one easier on the ears than the usual squeaky character tenor. Annina, his spirited partner in intrigue, occasionally brought out unnecessary harshness in Katharine Goeldner’s big mezzo. Marianne—Alexandra LoBianco and another debutante—announced the cavalier’s entrance with bossy stentorian authority.

In a world endowed with many suitable mezzos, Kozená’s uneven Octavian was no doubt due to her husband’s presence on the podium but his Met engagement bore appreciably finer results. The orchestra played spectacularly well under his suave guidance in a vivid reading redolent with tender nuance (Rattle was particularly attentive to Nylund throughout) and orgiastic splendor while mercifully short on bombast.

The waltzes danced with seductive verve and there was real bite when needed. Despite some very fine performances over the past decades. I haven’t heard a better conducted Rosenkavalier at the Met since Carlos Kleiber’s in 1988; its only recent rival was Kirill Petrenko’s dazzler last year at Carnegie Hall.

As the director had returned to oversee its revival, Carsen’s captivating, doom-laden production was in fine shape. If it’s all a little too busy, his updating of the action to the time of the opera’s composition works well although its apocalyptic ending packed less of a punch this time around—perhaps because it no longer came as a surprise.

His uproariously ribald take on the opera’s often deadly third act gain scored with Kozená wholeheartedly entering into its sly spirit with inspired comic relish. Despite its strengths, I wonder how well Carsen’s work will stand the test of time. We will soon enough have another chance to see in several years when Met-Nordic-hope Lise Davidsen steps in, a relatively rare chance to experience a Marschallin still close to the character’s real age–32.

Other than on December 28 when Nylund, Kozená and Rattle are replaced (Angela Brower’s debut that evening as Octavian, recently heard here under Petrenko, promises to be quite special), five more performances with this Rosenkavalier cast remain through January 4.