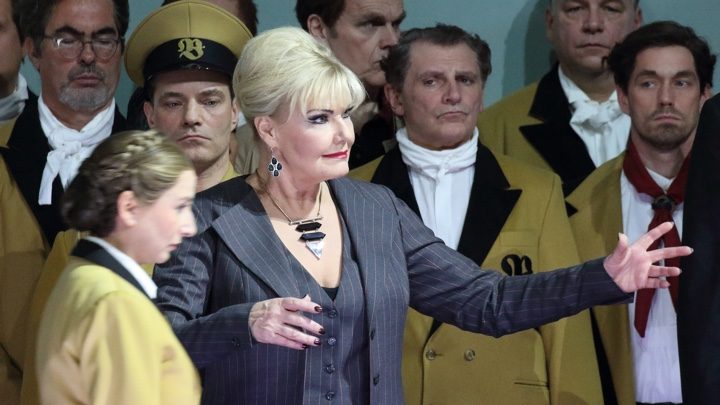 Last night in Munich, an utterly dreamy musical performance just about managed to wriggle free from a now 10-year-old Richard Jones production that manages the rare hat trick of being ugly, boring, stupid, and mediocre. A silver-voiced last-minute substitute, Johanni van Oostrum, received six curtain calls alongside her castmates, and Karita Mattila debuted her Ortrud with Trug and Heuchelei to spare.

Lohengrin can stand some directorial intervention. Choruses warn, accompanied by triumphant brass chorales, of the need to stand true and fight for the German Reich against invading Eastern hordes. The virginal, fanatically religious, and passive-to-the-point-of-catatonia Elsa von Brabant is our heroine. She doesn’t protest when accused of murdering her brother; instead, when asked to defend herself, she sings only of the knight she dreams will fight for her honor.

That knight demands more silence and passivity: she cannot ask his name. She dreams of losing all agency and dissolving into him: this, within the text, is evidence of her purity. Her one moment of active choice, asking his name, proves to be her downfall. Her opposite, the witch Ortrud, is characterized as unhappy, unholy, unfortunate, an un-woman, simply because she wields power. Certainly nothing about the proto-fascist feudalism on display from this opera’s ruling class convinces the viewer that the Radbod dynasty she seeks to rejuvenate could have been any worse.

If Jones’ production makes gestures at some of these problems – and here I mean “problem”  as something that needs working-through in ways that can be productive, problem as a criterion of interest – it makes no attempt to think them through.

Program texts from Paul Valery and the architect Albert Speer (no, not that one, his son) indicate some attempt to locate a metaphor for the work’s politics in the building of a split-level midcentury house on stage. The house begins as a pile of styrofoam bricks and ends as Lohengrin and Elsa’s never-used bridal suite. The characters and chorus slowly build it in all of their free moments, it becomes a sort of hourglass measuring the progress of each act.

I said earlier that the production was ugly, stupid, boring, and mediocre, and meant each of those adjectives precisely. It is ugly: the house and costuming are relentlessly and pointlessly unattractive. It is boring: the house is a trite and un-illuminating metaphor, and banishes all other dramatic action from the stage. 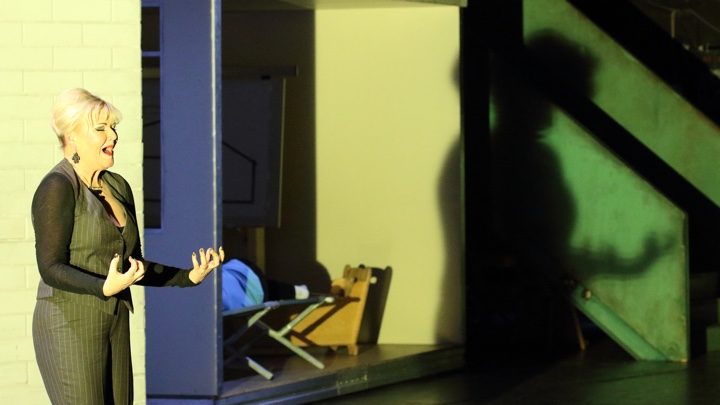 It is stupid: it would be utterly legitimate to set the opera in a time and place that have never existed or that have yet to exist, but in what time and place real or imagined do witches wear serge nun suits and green satin wedding dresses and god-kings either gray pleated track pants or velvet German Handwerker vests? Apparently, in the same time and place where kings speak to their alternately ‘50s country-club formal and ‘70s polyester leisure-suited populace via steampunk communal television.

Contradictions abound: handguns exist in the world of this Konzept –– Ortrud ends the piece by threatening to shoot either the new ruler, or herself, or both –– so why, when Telramund attempts his last-ditch assassination of Lohengrin, does he run in with a broadsword? Oy vey.

And it is mediocre: no one and nothing is particularly well-lit, there is very little Personenregie left, if there ever was much to begin with, and the opera’s many choruses mostly involve people standing in rows singing straight at the audience. I long for an interventionist Lohengrin – a Lohengrin that productively undercuts, rearranges, and reilluminates Wagner. This ain’t it.

Luckily, four remarkable performances in the lead roles escaped the deadly staging and conjured up a deeply moving evening. They were guided in doing so by the able baton of Lothar Koenigs; no stranger to this production or piece, he led a terse, fluid, expressive performance.

The extraordinary Bayerische Staatsorchester played with commitment, attentiveness, and sublime intonation and balance; little things, like the phrasing and intonation of inner lines in wind chorales or the rounded bass of string chords, were uniformly beautiful. The opera’s many choruses were sung lustily and in gorgeous form. The whole piece sounded fresh, alive, shimmering. 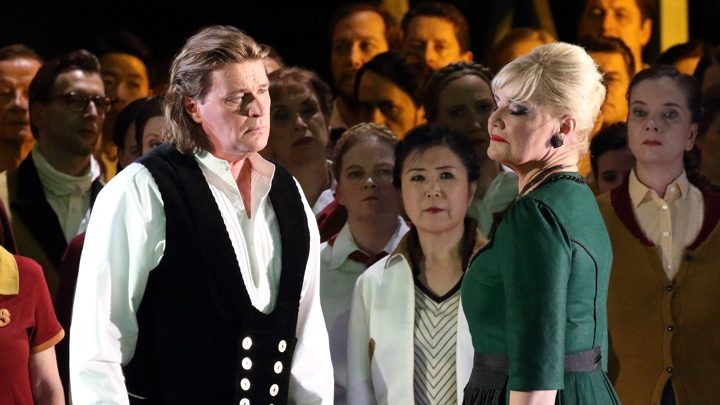 Klaus Florian Vogt’s nasal voice suits the part of Lohengrin. It’s a strange sound, sort of like an English church tenor rendered magically loud enough to cut through a Wagnerian orchestra. When pushed, especially at the top of his range, he produced some unattractive noises and some rumpled phrasing; but there were many compensatory moments of quiet singing, floated decrescendos, and much else of beauty.

As Telramund, Wolfgang Koch deployed a somewhat wooly baritone to great effect. His use of text was masterful – guttural German plosives spitting out of the line, and with rumpled hair and untucked shirt he embodied a middle manager sort of a knight, out of his depth when confronted with real power and easily manipulated by his power-hungry wife.

Which brings us to Mattila, who is, as ever, a miracle. Ortrud takes the stage early in the first act and has little to do (especially in Jones’ un-production) other than watch. Mattila is a compelling-enough performer that I found myself spending much of the first act watching her watch: anticipating her husband’s movements as he attempted to enact their long-planned power grab, arching an evil eyebrow at Elsa’s dream of salvation, watching the arrival of Lohengrin with mouth agape and arms crossed.

When it came time for her to sing, she revealed a newly-rich parlando middle and chest voice. The big moments – Ortrud’s curses in the second and third acts – were sung with astonishing power and beauty. Her silvery-foggy soprano makes itself heard not through or against but in concert with the orchestra and other voices on stage – for an example of this on recording, check out her criminally underrated Four Last Songs. She is sensitive and musically intelligent and still managed to interpolate soap-villain worthy belly laughter after the Curse and set the house vibrating with the witchy force of her “Fahr heim!” We stan.

Our originally-scheduled Elsa was Anja Harteros, who sang the part opposite Jonas Kaufmann when this production debuted in 2009. She has become an object of fascination and frustration for her acclaimed performances, reluctance to sing anywhere outside Munich, and frequent cancellations even when there.

For this reason, the email announcing that she had dropped out of this performance “due to illness” came as no great shock.

Her replacement, the South African soprano van Oostrum, performs regularly in second-tier European venues. Making a Munich debut with one day’s notice and preparation, van Oostrum banished all thoughts of what one might have been missing. She inhabited the character of the traumatized Elsa with extraordinary commitment, and sang with even, silvery, and rich tone, insightful and varied dynamics, and beautiful intonation.

She sounds, in fact, something like a younger Mattila; with a similar fogginess in the upper register that made their duets particularly poignant. The audience rewarded this evening of Wagner with six curtain calls, with the loudest cheers for van Oostrum; even after repeated goodbye waves from the cast, a core crew of (mostly) balcony-dwellers demanded a final duo bow for the lead pair.

An enterprising administrator would schedule a new Lohengrin for this quartet and conductor; this time, in a production as smart and committed as they are.