The San Francisco Opera, perhaps incidentally, continued their exploration of operas based on literary works by mounting the revival of Giacomo Puccini’s first success, Manon Lescaut. 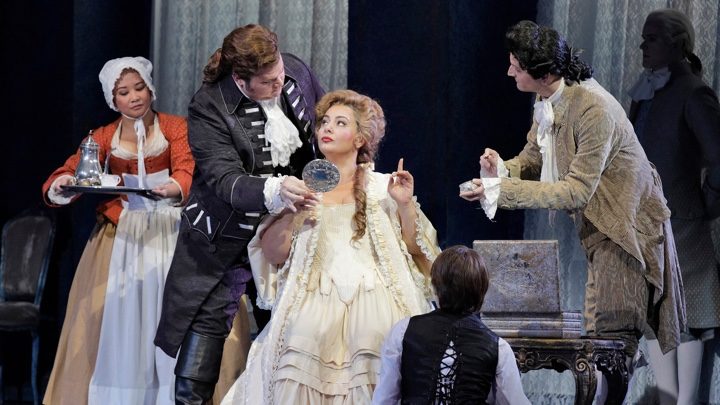 Abbé Prévost’s 1731 novel L’histoire du chevalier des Grieux et de Manon Lescaut, where it was based on, also turned into a subject of another well-known earlier opera, Jules Massenet’s Manon – a fact that Puccini was fully aware when he embarked on constructing the opera.

He opined “Why shouldn’t there be two operas about Manon? A woman like Manon can have more than one lover.” He even went further with his intention in creating Manon Lescaut, as he said in much oft-quoted “Massenet feels it as a Frenchman, with powder and minuets. I shall feel it as an Italian, with a desperate passion.”

Alas, this revival, which opened last Friday and was seen on Wednesday (11/13), unfortunately lacked that single most important ingredient of the opera, “desperate passion”, despite having many commendable qualities in the performers. I will dwell deeper on this issue later on, but I think that some of the problems are inherent in the opera.  After all, it was not easy to be sympathetic to the plight of a material girl getting her retribution, and the other characters were not exactly nice either. The episodic nature of each act also didn’t help the case at all.

Olivier Tambosi’s production, with handsome sets by Frank Philipp Schlössmann, was premiered at the War Memorial 13 years ago as a vehicle for Karita Matilla. While I didn’t see that production in 2006, everywhere I read commented about her commanding presence as the title role and, particularly, her doing a split while singing a high C in second act dance scene!

Seeing it fresh, Tambosi’s traditional approach was pretty faithful to score and libretto, however I felt that he failed to address the disjoint nature of the acts, even though he himself recognized it, as he said in an interview, “Now Puccini, in order to be different from Massenet, did something really crazy: In his four-act opera, it’s like four different operas. It’s like if there are four different women that we meet.”

Even more problematic was his direction for Manon and des Grieux, the two main characters of the opera. At times they seemed to be intentionally kept at a distance, and as the result the duo lacked the white-hot intensity that the opera severely needed.

This was particularly evident in the long Act 3 & 4 portion (played without intermission). In the prison scene Act 3, for example, Manon was perched high up the stage right wall behind iron window grill while des Grieux singing behind tall gate at the back of the stage; and for being with a lover dying in an exiled land, des Grieux didn’t seem to care to hold her close and support her in Act 4! Ironically, the moment when they actually got close (in the act twp love duet) it felt like merely just a one-night stand rather than an actual expression of passionate love. 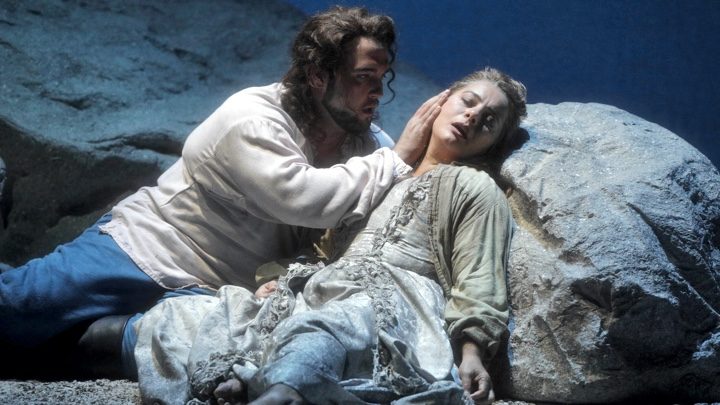 I also personally didn’t enjoy the blatant objectification of women displayed on stage, especially noticeable in two separate occasions. During the dance scene in Act 2, Geronte led a group of men to sit in semi-circle surrounding Manon, laughing and lusting over her while she was doing her minuet. This scene, coupled with the presence of bed in the set, gave a sinister tone to what was supposedly lighter moment. We were talking about vain Manon here, not Salome!

Similarly, during the roll call of women to be deported in Act 3, they were one by one visibly being branded by a hot iron prior to being chained together. With such a violent “filler” on stage, the focus unfortunately shifted from the pair of lovers; in fact, until the arrival of des Grieux’s “No! Pazzo son!” they pretty much disappeared on stage!

Nevertheless, the production itself had many noteworthy aspects to recommend. Schlössmann’s set pieces were attractive without being overblown, with the highlight being Manon’s glamorously blue boudoir. Even the Louisiana’s “barren wasteland” looked pretty impressive with the rock formations and sandy plains (even though it took a while to set up).

The 18th century costumes employed throughout the opera were luxurious and abundant in colors, with the exception of Act 1 (which were confusingly very monochromatic). I loved the arrival scene of the madrigal singers, as their sumptuous and richly detailed garbs could easily be recycled for Der Rosenkavalier or Ariadne auf Naxos!

As the star-crossed lovers, SF Opera decided to invite back two of SF favorites, both of which made role debuts with these performances. Armenian soprano Lianna Haroutounian, who was mesmerizing in the title roles of Tosca and Madama Butterfly (plus Nedda) previously, once again proved to be indispensable as Manon. Her vocal sounded full and rounded, and she easily sailed above the orchestra, always audible even during the loudest climaxes.

She imbued her performance with grace and finesse, and she did vary her takes of the role in each act; from the coy innocence of “Manon Lescaut mi chiamo” in Act 1, vain and conniving vixen in Act 2 (a part she played with glee), to frustration and eventual resignation in the last act. “Sola, perduta, abbandonata” felt sincere and heartbreaking in her rendition rather than the show-off piece it occasionally turned into.

Brian Jagde, who also made role debut, cut an imposing figure as des Grieux; his big voice sounded loud on stage. However, unlike his alluring take on Cavaradossi few seasons ago, he seemed to be overly concerned in producing his sound, unfortunately at the expense of his interpretation – his des Grieux was to me rather aloof and introverted, lacking any visible chemistry with Manon.

“Donna non vidi  mai” in Act 1 suffered the most; it came and went without much fanfare, only generating a little polite applause. He did improve over the course of the night, and by the time “No! Pazzo son!” arrived, the audience lapped it up completely!

Bass-baritone Anthony Clark Evans sang well as Lescaut, Manon’s brother, however he got the tendency to be completely drowned by the orchestra, chorus or other singers, specifically during the loud climaxes. Nevertheless, his playful banter with Haroutounian in Act 2 was refreshing to hear, and remained a highlight.

I felt that the best acting of the night came from veteran Philip Skinner, who completely stole the show each time he was on stage. He clearly had a great time playing the campy villain Geronte; his wickedness was reflected even in the way he moved and (in Act 2) directed other people.

SF Opera’s former music director Nicola Luisotti returned to conduct these performances, however on the night, his leadership was very uneven to my ears. There were moments of absolute clarity and beauty, such as the beginning of Act 2, but his reading of the score in general was marred by overly loud orchestra that at times completely overshadowed the singers or the chorus (at least from where I sat).

It was a frustrating night at the Opera, redeemable by the stoic performances of Haroutounian and Skinner. Let’s hope that the next time SF Opera bring back Manon Lescaut, they won’t forget to bring also the “desperate passion”!