Like any good gay theatergoers, we seek out Tennessee Williams revivals with the fervor of truffle-sniffing pigs. 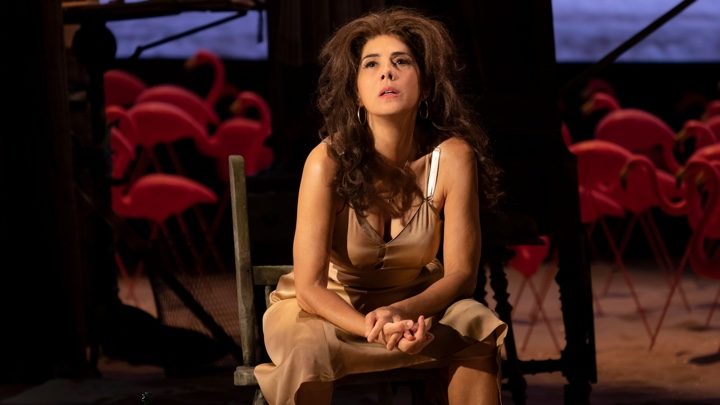 Cameron Kelsall:  In the past year alone, we’ve been together to several rarities, including A Lovely Day for Creve Coeur and Small Craft Warnings.

David Fox: Absolutely! Williams’ has long been a passion of mine, especially his depiction of female characters who are habitually abandoned or disappointed by the men in their lives (and the women, too) and left to fend for themselves without many survival skills.

Of course, we’re very familiar with the famous examples: Blanche DuBois, Maggie the Cat, Amanda and Laura Wingfield. But even the lesser works often reward us with Williams’ exquisitely nuanced portraiture and flashes of brilliant wit.

CK: You’ve delighted me many times with your impression of Mish Elishabesh Ashley as Lady in The Red Devil Battery Sign (“I wash a mishtresh to monsh-turs!”). Since you brought up Cat on a Hot Tin Roof, we also saw a simulcast of Benedict Andrews’ ghastly staging from the National Theatre.

DF: Yes, and didn’t we both independently see his equally terrible Streetcar? I found both appalling particularly in the treatment of their heroines. These women deserve our admiration and compassion, but Andrews treat them as outcasts or even freaks.

CK: Am I right to think that the current Broadway revival of The Rose Tattoo is your first production of this play?

DF: Indeed, it is. And if I innocently imagined that treating Williams’ female characters like laboratory specimens couldn’t get much worse than Andrews, imagine my horror at seeing Trip Cullman’s The Rose Tattoo—probably the single worst piece of direction I’ve seen on Broadway—where he drags them down even further.

CK: This production served as my first live experience with the 1951 play when I saw it at the Williamstown Theatre Festival three summers ago, where it originated. But in a way, it’s fair to say that we still haven’t seen it, given the liberties this staging takes with the material.

DF: Having consulted the script, I have to admit that some of the choices here that I attributed to Cullman do, in fact, have roots in Williams’ own stage directions—the presence of music, for example, or the black costuming of the female neighbors. But Cullman’s excesses go way beyond what’s intended, which despite some flights into symbolism and magic realism, is actually a family living in a real place.

CK: Decidedly not in Williams’ stage directions are the acres of plastic pink flamingos that populated the entire rear of the stage, nor the looped video of waves lapping against the shore that substitutes for a backstage wall. (The set design is by Mark Wendland, with projections by Lucy Mackinnon.)

Visually, the surroundings reminded me of the aesthetic I associate with Daniel Fish, a director who moves fluidly between opera and theater, and who often thinks far outside the box, both decoratively and interpretively.

But whereas Fish’s flights of fancy are nearly always grounded in a fully realized idea—which is evident whether I agree with it or not—Cullman seems to be piling a ton of experimental visual signifiers onto the stage, hoping that his audience, in their confusion, will think he’s created something abstract and profound.

DF: My own feeling is that in poetic and abstract plays, the director often needs most to help ground us in reality. The Rose Tattoo is certainly poetic, and frankly a bit of a mess—but as is so often the case with Williams, scattered with profound truths.

Here, we have a community of Sicilian immigrants who are both a world onto themselves, and also trying to assimilate. At very least, we need to see a sense of their daily lives and homes—completely missing here, as many of the cast run about like (to use your words, Cameron) feral animals.

Throughout, the Italians behave like something from a sitcom, shrieking and gesticulating. Poor Marisa Tomei! Although at least her Serafina delle Rose resembles an actual person. What about Tina Benko (as Estelle Hohengarten), who looks like a drag queen playing Lynn Anderson? Or Constance Shulman, whose Strega is straight outta Pirates of the Caribbean, eye patch and all?

CK: Not to mention the quartet of village gossips, led by Carolyn Mignini’s Assunta, who look perpetually ready to fling themselves onto a coffin. If Williams wanted to suggest a tight-knit posse of Italian housewives trying to keep certain old-world traditions alive, Cullman instead renders them as a pack of professional mourners.

DF: What I think this play still has to offer us is a deeply insightful study of Serafina, who is sexually alive and vibrant, but also shut-down by widowhood. From the start, Williams portrays her with tremendous dignity: the stage directions describe Serafina as looking like an Italian soprano playing Madama Butterfly, immaculately groomed and dressed in pale rose silk, sitting erect with hair perfectly coiffed and her feet delicately crossed.

Tomei is a fine actress and good choice for the role—she has the right admixture of allure, humor, and emotionality. But what chance does she have here, where she looks disheveled from the start, and has to play against the Alvaro of Emun Elliott, who cries and mugs and flails like a road company Roberto Begnini?

CK: Elliott, a Scottish actor, proves that unnecessary imports exist well beyond the world of opera. The second-act romance between Serafina and Alvaro doesn’t register the proper feeling of sexual reawakening that Williams embeds in the text—partially because Tomei and Elliott take such a broad approach to the material, but also because Cullman paces their courtship at breakneck speed.

This production also loses the parallelism of the virginal awakening of Serafina’s daughter, Rosa (an otherwise compelling Ella Rubin), who is swept up in her first blush of love with Jack, a merchant marine.

DF: Agreed. Although there are many supporting characters and a lot of cross-talk in The Rose Tattoo, the play fundamentally focuses on those four people. Here, all of them register as broad caricatures. Though this is the first time I’ve seen the play, I have vivid memories of the movie, which of course preserves the unforgettable performance of Anna Magnani, for whom the role of Serafina was originally conceived.

But the other three—Burt Lancaster as Alvaro, Marisa Pavan as Rosa, and Ben Cooper as Jack—are also terrific, and wonderfully sympathetic. You truly care about what happens to them. Here I mostly cared about when we might finally get to our car in the Port Authority parking lot.

CK: Revived by passion, at the end of the play Serafina calls out to Alvaro: “Vengo, vengo amore!” I come, I come, my love! In this production, you can barely hear Tomei’s exultation over the drone of white noise from the sound design and the squawking of the widow’s chorus.

Once again, Serafina’s journey back to life is eclipsed by cheap, empty stagecraft. Meanwhile, I found myself internally screaming not vengo, but vado: I go, I go!