I believe in unicorns 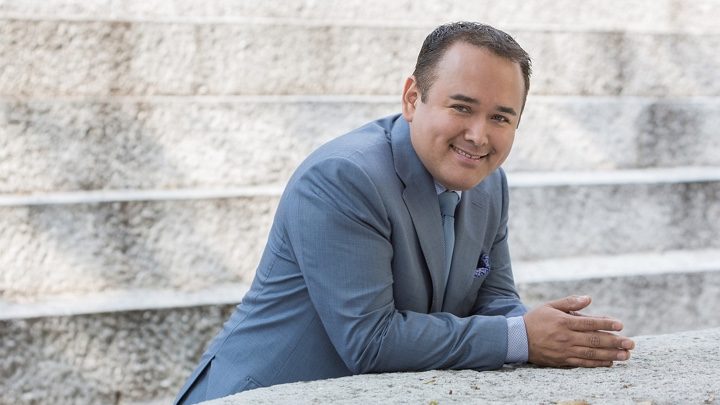 A Mariachi band was hired to play out over the Music Center’s new plaza from the outdoor balcony to welcome patrons into the theater.. Dried floral arrangements reeking of fall adorned the stage left and right and at the front.

Yet what happened on that stage suggested sunny spring and summer as Mr. Camarena serenaded us with a program equally divided among bel canto specialties of his operatic prestige and the classic Mexican and Cuban melodies of his Latinx heritage.

He began the evening by begging the audience’s indulgence as he has been fighting an allergic condition for many weeks and vowed to “do his best” for us. What with the furnace of the Santa Ana winds blowing and smoke from nearby fires still hanging in the air there was nothing but sympathy. He then proved our concern to be completely unnecessary by launching into four of the most exacting bel canto arias in the repertory.

He opened with Gualtiero’s aria from Bellini’s Il pirata, “Nel furor delle tempeste” which he announced as a new role in his future. Mr. Camarena has a beautifully placed lyric instrument that he never pushes and deploys with consummate grace.

His phrase endings, so gently supported as to seem to challenge gravity, dovetail seamlessly into the start of each successive phrase in the ideal manner.

He also never sings louder than is beautiful which makes him a unicorn among tenors. He dispatched the cavatina with panache and then after hearty applause, from an audience thinking it was over when it was only half through, lit into the martial cabaletta. He launched high notes like shooting stars out over our heads and gamboled through roulades at dizzying speeds.

Although he tended to favor high note finales over the more stylistically correct penultimate high note there’s no question it added a greater excitement to the evening. His rendition of “Si, ritrovarla io giuro”, Prince Ramiro’s aria from Act II of Rossini’s La Cenerentola was so exquisitely sung and dexterously decorated that it brought ¾ of the audience immediately to their feet at its conclusion.

At the repeat of the main theme he started taking little liberties with the note values that were meant to enliven the drama of the piece but only succeeded in breaking the line. If he had sung it straighter I think it would have been far more satisfying than with the indulgences he took but the audience ate it up with a spoon and I’ve been wrong before.

He ended the first half with his party-piece, “Ah! mes amis” from Donizetti’s La Fille du Régiment, easily and cleanly hitting all the C’s the composer required and actually drawing out the last over the text which is his trademark.

Hitting a high C is tricky enough but clearly pronouncing words while singing one is a rare skill. He left the stage to near pandemonium and another standing ovation. Frankly I think everyone would have gone home happily sated after that.

We Angelenos tend to take our Mexican cultural heritage for granted. Many of our street names are Spanish and we enjoy every level of Latinx cuisine from fast food in our school cafeterias to high end restaurants that specialize in regional dishes. That music too is part of our heritage from a young age. (My guest on Sunday was taught “Cielito lindo” in the first grade in Spanish in her predominantly Anglo public elementary school 70 years ago.)

So when Mr Camarena took the stage again in the second half he promised that this would be the ‘fun part’ of the evening. He then asked if there were any Mexicans in the house which elicited whooping and cheering.

Six songs ranging from the ubiquitous “No puede ser” and “Granada” to rarer flowers like “Flor roja” from Jacinto Guerrero’s Los Gavilanes all rendered with the same passionate elegance as in the bel canto first half.

All of these numbers benefited from the Mexican tenor’s highly romantic yet understated style. Especially when you consider that when we hear most of this music performed live it’s usually in a mariachi arrangement.

For the third piece, Astor Piazzolla’s “Los pajaros perdidos” Mr. Camarena allowed his long-time accompanist the solo spotlight. Ángel Rodríguez played all evening with an extraordinary precision and was an attentive collaborateur. His octaves were especially clean and his playing always had real point.

I must admit at times his technique was a tad flamboyant, his free hand momentarily circling the air or making a fist. It was as if he was almost conjuring the music rather than playing it. His playing of this piece brought all his virtuoso skills to the fore and brought tremendous cheers from the audience. He was visibly moved at his bow.

The best of the three encores was a rapturous “Malagueña” where Mr. Camarena not only displayed prodigious breath control, the audience literally breaking into applause from sheer excitement before he’d even ended some of the longest held notes, but his play around the break of the voice was exquisite. We also got “Cielito lindo” and Jimenéz’s “El Rey” as singalongs.

The abuela next to me, who was dressed to the nines, insisted on being helped to her feet at the end to join the cheering.