At the Park Avenue Armory, Barbara Hannigan chose to sing works that tested her metal in odd corners of vocalism. 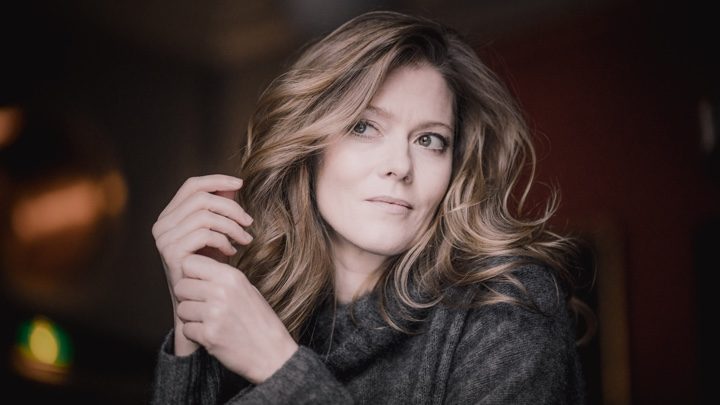 Barbara Hannigan has a voice of gleaming metal; one scans the periodic table, pondering which one precisely meets the case. Silver and gold are far too common. Quicksilver shimmer and shadow is more like it—and sometimes, and not rarely, platinum. Something crystalline and jewel-like or dangerous and radioactive.

In the Park Avenue Armory’s Board of Officers Room, a fine, tall cube for a recital series, she gave two concerts this week. I missed the first one, devoted to John Zorn. At the second, on Thursday, Hannigan chose to sing works that tested her metal in odd corners of vocalism.

Luigi Nono’s “Djamila Boupacha” is a doom-laden lullaby, ranging over the scale in a despairing half-dream: the torments of the text mediated a little by the clean vocal technique.

“It is at moments after I have dreamed
of the rare entertainment of your eyes …
the genuine apparition of your smile ….”

Luciano Berio’s “Sequenza 3” called on non-singing performance, obbligato hoots and squeaks and snaps and clucks and mutters and snorts and coughs and clenched fists or open hands to muffle text, all of it rendered in prim, precise, swift-moving rhythms.

All these works were sung a cappella. Perhaps to vary the assault on our ears and give the singer space to breathe between workouts, each was paired with a solo work for a stringed instrument. Violinist Eugene Drucker played Augusta Read Thomas’s “Incantation”; cellist Paul Watkins performed a prelude by Huw Watkins; and Philip Setzer, John Harbison’s “Serenade for Solo Violin.”

These alternatives seemed to echo rather than intrude upon the vocal works they were paired with, responding to the emotional journey with a corresponding return. The solo lines sang, as Hannigan’s solos twined and harmonized.

In the second half of the concert, Hannigan having changed from the artistic look, loose white blouse, loose tossed hair and black slacks of the first half to severe purple velvet that emphasized her height and slimness and columnar throat, rising to a proud, self-aware face like the head of a caryatid on some Jugendstil façade, she performed the two Lieder by Stefan George that are the third and fourth movements of Schönberg’s Quartet No. 2.

The piece was performed by the Emerson Quartet, the three soloists who had already appeared in the first half plus violist Lawrence Dutton, who has rather more of the leading role in this work than the average violist gets in a quartet, and provided it with outgoing brilliance.

Hannigan’s voice descended to a quiet, almost cavernous numbness for the despairing prayers of “Litanei” (some of the lowest notes revealed the only indication of less than ideal command in her technique all night) and lifted us in gradual exultation for the measured, not too confident triumphs of “Entrückung.”

She coupled gorgeously with the quartet, using the texture of the music as a platform for the poetry’s message, distinctly a member of a balanced ensemble rather than glorying in her own wonderful timbre.

Hannigan is a conductor as well as a soloist, but on this thrilling occasion she was a colleague and partner.