From the technical standpoint San Francisco Opera's Billy Budd was pretty much flawless. 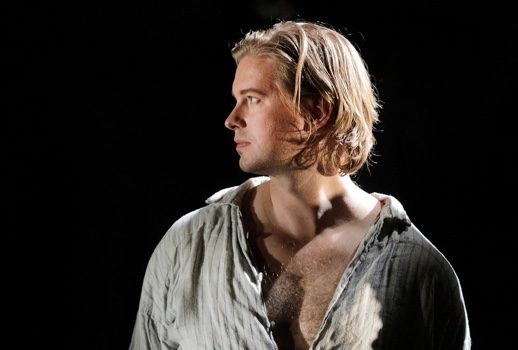 The San Francisco Opera continues their 2019-20 Season with another opera based on a literary work, Benjamin Britten’s Billy Budd, which opened Saturday September 7.

Based on an unfinished Herman Melville’s novella and written to a libretto by novelist E. M. Forster and long-time collaborator Eric Crozier, Billy Budd was commissioned by the Arts Council of Great Britain for the 1951 Festival of Britain, and it was premiered at the Royal Opera House on December 1 that year.

The two-act revised version, most frequently performed these days and used for this production, came from 1960 as Britten was preparing for a BBC broadcast.

Over the years, Britten’s music and particularly Forster and Crozier’s libretto have both puzzled and fascinated audience and scholars, and a great deal of research had been performed on the subject. Barry Emslie in his 1992 article in Cambridge Opera Journal (titled “”Billy Budd” and the Fear of Words”) distilled the essence of the libretto best in my opinion as he noted

Three thematic clusters can be inferred from the libretto of Billy Budd: the sexual, the spiritual and the social. Each exists dialectically with the other two, creating a characteristic apparent synthesis of their respective internal and relational contradictions. Indeed, Billy Budd’s status as a masterpiece traditionally depends on an assumed successful and harmonious resolution of its thematic material within the overall musical context.

Those three themes resonated well with me, and I would come back to them as I discussed the virtues (or lack of) of the current production below. 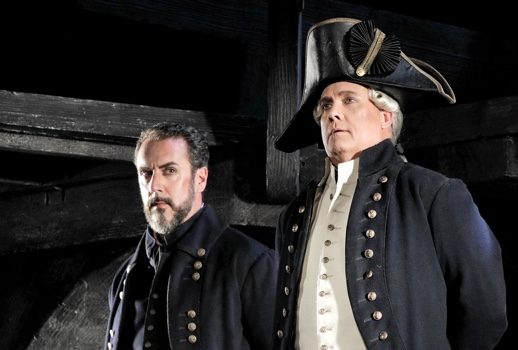 For this revival, the direction was entrusted to the able hands of Ian Rutherford, who also co-directed David McVicar’s Die Meistersinger von Nürnberg a couple of years ago. The performance also coincided with the Melville bicentennial and the 100th anniversary of the discovery of his unfinished manuscript of Billy Budd.

There was certainly no doubt about the grandeur of Christopher Oram’s set. In his excellent survey of Billy Budd  productions,Thomas May succinctly described it:

The careful details of Christopher Oram’s curved, wooden ribcage set (making reference to another Melville icon with its suggestion of a whale) have been praised for persuasively evoking a sense of the historical period as well as the claustrophobic spaces in which the story’s psychodynamics play out—all of a piece with the director’s stated aim to give voice to the ideas “that were clear to the creators” of the work.

Indeed, that static set truly a sight to behold on its own, so no wonder the Merola Opera Program borrowed it for their performance last month.

Equally majestic was the lighting, originally designed by Paule Constable, as executed by David Manion in this performance. In a sea of 75 men on stage, you never lost sight on any single action and any soloists at any given time, a truly remarkable achievement.

Grandage/Rutherford executed the spiritual and the social themes (going back to Emslie’s essay) extremely well. With the very detailed costumes for everybody on stage, you could not only differentiate the social classes for each, but also tell the ranks of the officers! 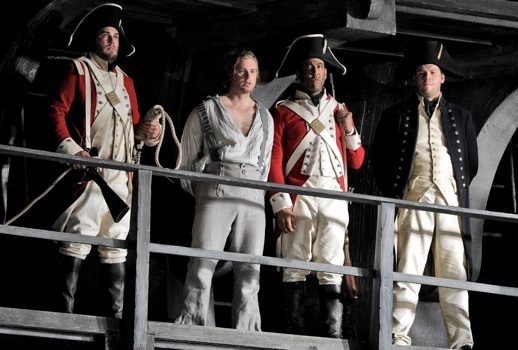 In addition, Grandage/Rutherford painstakingly characterized the three central figures; Billy with his Christ-like innocence, Claggart the pure evil personification (after all, his character has been described as a descendant of John Milton’s Paradise Lost’s Satan) and Captain Vere’s Pontius Pilate indecisiveness.

In short, from the technical standpoint the production was pretty much flawless. However, to me, it failed completely on the third aspect, the sexual theme. For my pragmatic mind, I tend to lean towards Billy Budd productions with overtly homosexual tendencies, as it provides me with the much-needed motivations for the actions of Claggart and, to a certain extent, Captain Vere.

Grandage’s staging was severely lacking to show this regard; in fact, it almost felt like it was a concerted effort to get away from that aspect of the story. For example, I refuse to believe that the lower class of the HMS Indomitable still found the time to dress properly daily at sea (even Disney’s Pirates of the Caribbean movies wouldn’t go that far!)

In that sense, we were left with interpreting the production on a pure philosophical ground, and that was much harder fact to grasp, in my opinion.

In addition, the decision to have Billy’s hanging off-stage and the low-key depiction of the lower class’ mutinous actions (“Down all hands!”) afterwards felt very underwhelming. It robbed the importance of such scene. After all, if Billy was Christ-like, then that scene should be comparable to the events described in Matthew 27: 51-53.

For all its shortcomings, this was still a remarkable achievement, and it truly showcased Billy Budd as a grand opera of the 20th century. Acoustically, mounting this production on the deep War Memorial stage additionally presented a new challenge, as to my ears, there were few occasions where the voices went in and out in rather unstable manner, particularly noticeable during the Novice’s scene after the flogging.

Nevertheless the performance was so fine it would have made an excellent season opener.

SF Opera was blessed with a great cast for this production, led by three outstanding main characters. I was most impressed with tenor William Burden, who seemed to be moving from strength to strength.

After his extraordinary account as George Bailey in last fall’s It’s a Wonderful Life, Burden’s Captain Vere was once again a marvel. He represented the character in multi-faceted approaches; authoritative and commanding in both acts, troubled and retrospective in the Prologue and Epilogue.

Forster was credited with the creation of the Prologue and Epilogue of the opera, although many had argued that those actually weakened the story. (Melville’s novella ended with Vere died not long after Billy, his final words were his name (that in itself, a pretty dramatic opera ending!))

With its somewhat forced last minute optimism (“I’ve sighted a sail in the storm, the far-shining sail, and I’m content.”), a great care was needed to not let the scene turn anticlimactic, and I felt that Burden, with his varied tone and even changed body language, managed successfully to end the opera in satisfying manner.

As Claggart, 2018 Tucker Award winner Christian Van Horn fully embodied the evil personification. Clad absolutely in black, his presence all over the stage felt like a phantom (or bad conscience) and his deep voice brought a terrifying edge into his interpretation. There was no redemption for this man!

Baritone John Chest– making his company debut – seemed to be an ideal Billy with his handsome youthful look and doe-eyed innocence. That night he did seem a bit underpowered in the beginning, particularly “Billy Budd, king of the birds!” (although most Billys tended to sound that way at that particular point, battling the full force orchestra), but he recovered in time and gained strength.

Personally, I felt that his take on the role wasn’t completely naïve; he’s got some level of street smartness in his reading.

Billy Budd is truly an ensemble piece, so I was glad that the comprimario roles were pretty uniformly excellent, and their movements on stage were well choreographed and coordinated. Few voices stood out for me, particularly Philip Horst’s definitive Mr. Redburn, John Brancy’s friendly Donald and Philip Skinner’s gruff performance (both in tone and in appearance) as the caring Dansker.

Lyrical tenor Brenton Ryan excelled in the role of the Novice, especially in the duet with his Friend (Eugene Villanueva) after the flogging, interspersed by the Chorus.

Conductor Lawrence Renes led the SF Opera Orchestra in an exciting and vigorous – if slightly relaxed –fashion. I loved that the climaxes were pretty well constructed (“This is the Moment” almost felt like the precursor for “One Day More” from Les Misérables that night) and the fact that he highlighted the alto saxophone, which sounded hauntingly heartbreaking during the aforementioned duet after the flogging.

The men from the San Francisco Opera Chorus and the boys from the Ragazzi Boys Chorus completed the picture sounding amazing and in unison.

It was an enjoyable night at the Opera, few reservations aside. However, the most touching part for me was the fact that Saturday opening night performance was dedicated to the memory of music and dance critic Allan Ulrich, who died last July.

There was a small gathering at the Press Room prior to the performance where General Director Matthew Shilvock and some of Allan’s closest friends gave speech remembering Allan. In an era where hatred seems to be the norm, this was extremely touching to me, and I am very grateful to support this Company and this community!