O for a Muse of fire 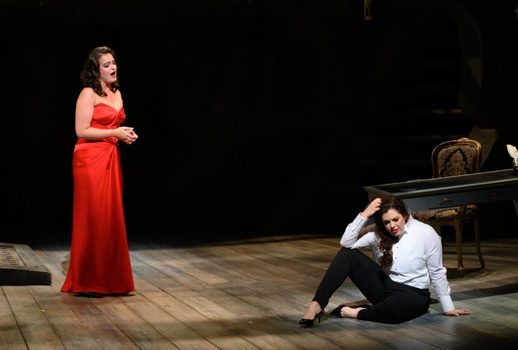 Saturday August 17 the Merola Opera Program wrapped up its annual Summer Festival with the Merola Grand Finale concert at the War Memorial Opera House, showcasing the talents of the 29 young Merolini artists.

Now in its sixth season, the prestigious opera training program keeps going strong to offer coaching and training in pretty much all aspects of opera, all free of charge. The Grand Finale, in particular, turns into a yearly highlight around this time of the year for San Francisco operagoers, and without exception, so was the concert this year.

Interestingly, Eldridge chose to use the set of the upcoming Michael Grandage’s Billy Budd production (designed by Christopher Oram) as the backdrop. The gargantuan yet claustrophobic set piece, at times felt at odds with the intimacy of the proceedings of the night; mostly consisted of arias and duets from a wide variety of operas.

Eldridge, however, did have some interesting ideas about the staging occasionally, and I will detail them as I discuss the individual performances below.

The event began not with an overture, but with the opening lines of William Shakespeare’s Henry V, welcoming the audience to the stage. Following was the opening scene of one of my most favorite operas of all, Richard Strauss’ Der Rosenkavalier, with mezzo-soprano Cara Collins as Octavian and Anna Dugan as The Marschallin.

Unfortunately, the scene turned out to be the most problematic one for a number of reasons. The orchestra (mostly consisting of San Francisco Opera Orchestra players) sounded very tentative during the Introduction and didn’t let the glorious melodies soar. 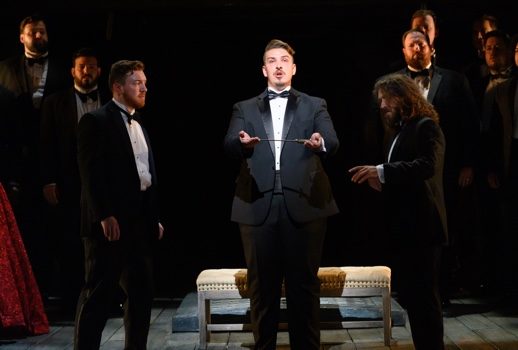 Subsequently they, as led by George Manahan– Music Director of the American Composers Orchestra and Portland Opera – remained stubbornly loud and had the tendency to drown the singers, and Collins, while looking sufficiently boyish in her suit, unfortunately suffered the most as she was struggled to be heard over the orchestra.

Dugan, on the other hand, managed to ride over the orchestra and emerged unscathed. Her voice sounded full and glorious, and she looked dazzling in bright red gown. It also didn’t help that Eldridge staged this postcoital conversation in a very unintimate way, placing the singers on either side of the stage and refusing to let them be together until the final moments of the scene!

Things were much improved for the following heartbreak aria “Or dove fuggo io mai” from Vincenzo Bellini’s I puritani, largely because of the commanding presence of baritone Laureano Quant as Sir Riccardo Forth (and amply supported by tenor Victor Starsky as Sir Bruno Robertson).

Two excerpts from Romeo and Juliet-themed operas ensued; Stéphano’s mocking aria from Act 3 of Gounod’s (sung by Brennan Blankenship) and Guilietta’s Act 1 aria from Bellini’s I Capuleti e i Montecchi(by Anne-Marie MacIntosh). In fact, Shakespeare seemed to be what Eldridge had in mind as the theme of the night, as more excerpts from his plays (and operas based on his plays) turned up.

Tenor Brandon Scott Russell has a gorgeous voice that he employed elegantly singing “Vidino divan, presladká”, the Prince aria from Antonín Dvorák’s Rusalka, however I felt that the role was slightly too big for his voice, especially as he was struggling to be heard above the orchestra and the water nymphs of Merolini ladies.

This was where Eldridge’s direction shone, as he put Russell right in the center with the ladies in Galen Till’s colorful ball gowns circling him, and Eric Watkins’ lighting judiciously put the focus on the action. 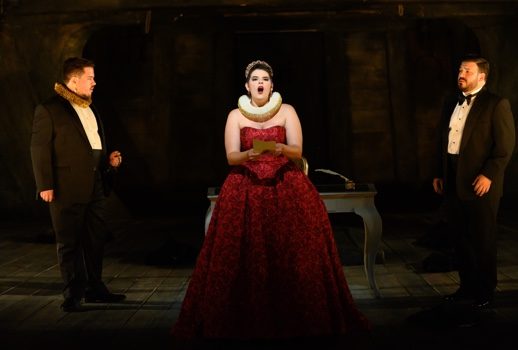 The second portion of the first half of the event was filled with powerful singing and dramatic acting, as it was heralded by the arrival of “Mes chères filles” from Francis Poulenc’s 1956 Dialogues of the Carmelites, a curious choice for such occasion.

The lengthy aria of Madame Lidoine and subsequent interaction with Mother Marie proved to be a perfect vehicle for showcasing the powerhouse soprano Amber R. Monroe and mezzo Alice Chung, both of them excelled with their deeply felt interpretations.

By the time the a cappella Ave Maria began, you couldn’t help but being swept away by the intensity emerged from the stage. My only slight nitpick with this was the irony that they were nuns singing about martyrdom in glamorous ball gowns!

Eldridge segued from that scene to his biggest pièce de résistance of the night. Hidden as one of the Carmelite sisters was baritone Edward Laurenson in drag, and after all the Sisters left the stage, he launched into Don Alfonso’s sarcastic comment about the women from Mozart’s Così fan tutte.

With his booming voice and great comic timing, Laurenson was enthusiastically received by the audience, providing an antidote for the previousdepressing moment.Esther Tonea, who impressed me greatly as Diana in the opening night of Jake Heggie’s If I Were You few weeks ago, once again gave a marvelous rendition of Fiordiligi’s succumbing into Ferrando’s temptation in the duet “Fra gli amplessi” with his Fabian from Heggie’s opera, tenor Michael Day.

It was so refreshing to see Tonea and Day share a lovely chemistry and their voices blended nicely in that charming duet. 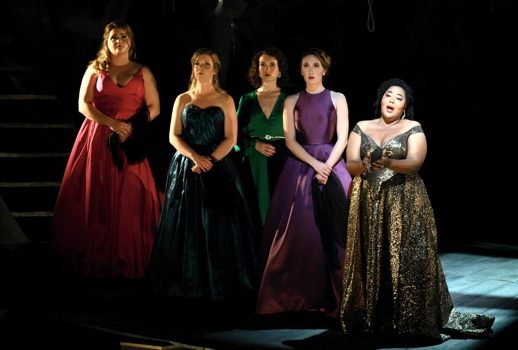 The drama came back with thrilling presentation of Elisabetta’s aria “Quella vita e me funesta” from Act 2 of Donizetti’s Maria Stuarda and the subsequently trio with Cecil and Leicester.

Chelsea Lehnea embodied Elisabetta with chilling precision, and she demonstrated agility to cope with the demand of the score, ably supported by the villainous Lord Cecil of Rafael Porto– who performed the role with impish glee – and to a lesser extent, the earnest but underpowered Salvatore Atti as Earl of Leicester.

Atti stayed on to perform the final piece of the first half, Verdi’s perennial favorite La Traviata with whom I thought to be the best performance among the men that night, baritone Jeff Byrnes as Germont. His rendition of “Di Provenza il mar il suol …” was nothing short of extraordinary, marked by ease of delivery, legato phrasing and imposing presence. I would certainly hope that Byrnes would be back in War Memorial to perform the role in its entirety soon!

After the break, the second half began with a jovial account of Marie and Sulpice’s duet from the beginning of Donizetti’s La fille du regiment. Elisa Sunshine’s bright timbre was particularly attractive, and she moved and acted believably well as the vivandière of the Regiment, under the command of the caring Sulpice of Andrew Dwan.

The whole scene was also arguably the best showcase for Eldridge’s movement direction, particularly with regards to the Merolini guys who represented the member of the Regiment. They sang, marched, danced, even made faces in well-choreographed sequences that really told the story.

The rest of the second half was filled with mostly duets from various operas in different permutations of the singers mentioned above. A special note, however, had to be made for hair-raising production of a duet from seldom-seen Ambroise Thomas’ Hamlet, which only had been seen once here in 1996.

The duet “Hamlet, ma douleur est immense!” found the regal-sounding Chung as Gertrude (Hamlet’s mother) moving from emotion to emotion – concern, confusion, denial and guilt – all within a single scene; it was truly a formidable experience! She had great rapport with her “sparring partner”, baritone Tim Murray in the title role; equally stoic if slightly less intense.

Shakespeare made a comeback in the extended finale which began with the final scene of what arguably the greatest Shakespearean opera, Verdi’s Falstaff, by way of Offenbach’s operetta La belle Hélène and Shakespeare’s own A Midsummer Night’s Dream.

In “Ninfe! Elfi! Silfi!” Patricia Westley, with her crystal-clear voice, made an innocent and other-worldly Nannetta calling the spirits in a scene of magical stature. Without break, the hijinks moved to reveal the next scene, Hélène and Pâris’ hilarious duet “C’est le ciel qui m’envoie”, where Hélène thought Pâris’ seduction was just a dream, delivered with great comic timing by Edith Grossman and Nicholas Huff respectively.

By then, all the Merolini had populated the stage, and they then proceeded to recite the oft-quoted Puck’s closing statement, wishing the audience good night and to “restore amends”, before launching into Falstaff’s final lines “all the world is folly, and all are figures of fun”.

It was a great fun, if lengthy, night watching the future of opera. I had no doubt that some of these singers would have a great career ahead of them. So to all 2019 Merolini, I wish you “Good Night, and Good Luck!”