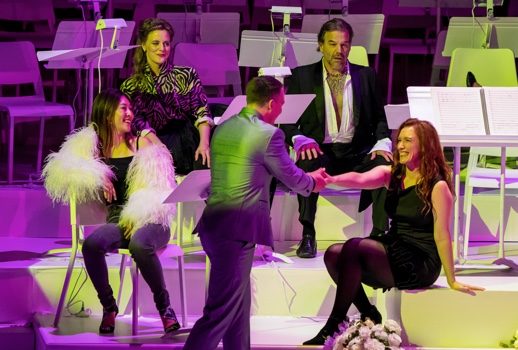 The city of Bruges was anything but dead Sunday afternoon when Bard SummerScape’s concert staging of Korngold’s neglected—in the US anyway—Die Tote Stadt emerged triumphant thanks to Clay Hilley and Sara Jakubiak and some of the most thrilling singing I’ve heard for a long while.

Unable to move beyond his grief over his dead blonde lover, a man spots a lookalike on the street and immediately becomes obsessed with her. Alfred Hitchcock’s Vertigo, right? Yes, that scenario fits Scotty but Tote Stadt’s Pault oo but after that strikingly similar set-up, the two works diverge–or do they?

Korngold and librettist Paul Schott in adapting Georges Rodenbach’s Bruges-la-Morte would have us accept that most of the second and third acts of their opera depict Paul’s fever-dream brought on by the encounter with his late wife’s doppelganger. I’ve always thought one approach to Vertigo is to read the second half of the film—after Midge visits a catatonic Scotty following his complete mental breakdown—as his dream: the often hallucinatory interaction with Judy is “really” just a figment of his broken mind.

I suspect the overwhelming dream aspect of Tote Stadt may be one reason it dropped out of the repertoire for decades after its very successful premiere in 1920. On the other hand, it’s precisely that challenging form of wavering reality that has likely attracted contemporary directors. But Bard’s striped-down presentation permitted one to contemplate the problematic text while luxuriating in the ravishing score.

With the Orchestra Now placed in the pit, the stage offered a chaotic arrangement of beige chairs and music stands with a spotlit podium front and center. Jordan Fein’s production and Stephan Moravski’s design proved canny solutions to the singers needing to perform their difficult roles referencing their scores but eventually that cluttered and monochrome mise-en-scène grew wearying as it restricted movement often keeping singers who were addressing each other far apart.

Fein’s major directorial conceit was having the dead wife Marie onstage nearly throughout embodied with blank Ivanka-ness by Kirsten Harvey. Her icy presence proved effective in the opening act but Fein didn’t seem to know what to do with her subsequently. I did, however, enjoy his free-wheeling use throughout for dramatic emphasis of variously-sized fonts in the titles.

The other reason for the opera’s relative rarity must be the punishingly long and high role of Paul, but happily conductor Leon Botstein was appreciably more successful with his tenor than he had been in Das Wunder der Heliane several weeks ago.

As he had two years ago as Dvorak’s Dimitrij, indefatigable American heldentenor Clay Hilley poured out floods of secure, golden, seemingly effortless tone throughout. One never ever had to nervously hold one’s breath as each soaring forte climax approached.

Hilley’s Paul was a simple man stubbornly holding onto his memories when his enshrouded world is thrown upside down by his chance encounter with Marietta. Hilley was always isolated away from anyone else on stage—from his faithful servant Brigitta, his friend Frank and even the irresistible Marietta—emphasizing his onanistic fixation.

Having heard brawny tenors bark and bray their ways through Wagner and Strauss for years, I wonder if 2019 might prove a turning point.

Although I only experienced them on the radio, both Stefan Vinke and Andreas Schager this spring made me look forward to rather than dread any Siegfried appearance in the Met’s Ring, while in April Hilley’s Menelaus in Odyssey Opera’s Die Aegyptische Helena gave further evidence that this young singer is another real contender.

Matching Hilley in intensity and power was the charismatic Jakubiak who arrived late to replace the originally announced soprano. As Marie/Marietta she easily embodied this ambiguous character in all her many contradictory facets.

At times Carmen, then Lulu, or maybe Mélisande or Zerbinetta, the feckless dancer-turned- idée fixe demands much from its performer. She must metamorphose from the beguiler of the entrancing “Glück das mir verlieb” to the relentless termagant of a final duet which goads Paul to strangle her.

Having just done her roles in Robert Carsen’s production of Tote Stadt at Berlin’s Komische Oper, Jakubiak performed with striking composure, her pungent coppery soprano growing in confidence as the afternoon wore on. Initially her top notes may have lacked freedom but she soon warned up and by the end met Hilley decibel for house-filling decibel.

If the stunning Jakubiak-Hilley pairing wasn’t enough, Alexander (Birch) Elliott built on his impressive fill-in Met debut late last year as Zurga in Les Pêcheurs de Perles with a richly potent Frank and Fritz. Occasionally one noticed him oversinging and he and Botstein missed the swoony rapture of Pierrot’s well-known “Tanzlied,” but all in all this was yet another promising appearance by Elliott.

A friend had previously praised Deborah Nansteel to me but this was myfirst time hearing her in person. As Brigitta she revealed a big bold mezzo but also some worrying unsteadiness particularly in the first act. Marietta has a group of theatrical followers who are nearly as annoying as those in Adriana Lecouvreur but So Young Park, Rebecca Ringle Kamarei and Richard Troxell did their best with William Ferguson as Gaston/Victorin standing out among that crew for his brightly pinging tenor.

I particularly enjoyed that the pesky troupe is about to go off and perform Robert le Diable; does anyone know if Korngold quotes Meyerbeer? Based on his baroque opera scene in Anthony Adverse, I wouldn’t ascribe to him a gift for pastiche.

Unfortunately Bard’s preprofessional student group Orchestra Now–despite its best efforts–wasn’t quite up to Korngold’s lush, soaring writing particularly in the extended preludes and the superfluous dance sequence in the second act. The often recalcitrant brass let down the team on more than one occasion, but the shimmering strings did manage some of the needed sheen.

Botstein continues to impress more as an enterprising programming mastermind than as a maestro but given what may have been limited rehearsal, on the whole he made a convincing case for Korngold’s debut opera—a magnificent achievement by the 23-year-old composer.

Anyone eager to hear an absolutely top-notch orchestra and conductor in this music will have to wait only until November when Kirill Petrenko in his final season leads the Bavarian State Opera in a new Tote Stadt starring Jonas Kaufmann and Marlis Petersen.

I can imagine Paul will suit Kaufmann’s brooding persona quite well but I’ll be surprised if he surpasses Hilley’s phenomenal singing on Sunday after which the American was cheered to the Gehry-rafters with a real hero’s ovation.

Tote Stadt was the final event in an impressively wide-ranging two-weekend festival “Korngold and his World.” that also featured a detailed exploration of the composer’s influential film scores.

Next summer’s festival will be devoted to “Nadia Boulanger and her World” but since she wasn’t an opera composer the featured staging will be Chausson’s rare medieval epic Le Roi Arthus.