Odyssey Opera's Ägyptische Helena was a beautifully executed production of a flawed opera. 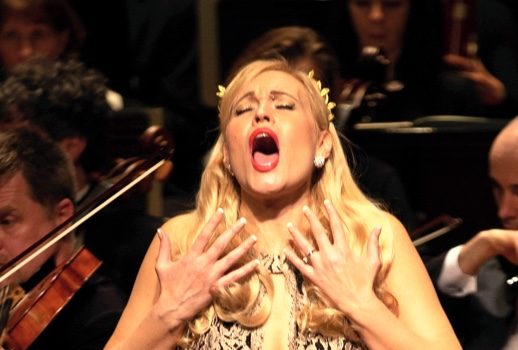 Odyssey Opera, Gil Rose’s Boston-based enterprise, purports to “advance the operatic genre beyond the familiar and into undiscovered territory.” This mission has led Odyssey to carve out a niche as one of the country’s foremost proponents of operas that audiences have never heard of.

For every jewel that Odyssey unearths in the process of questioning our assumptions about what deserves inclusion in the canon, it brings up a lot of rough. But that process of excavation makes the discoveries the more poignant. I’ll be, for instance, forever grateful to Odyssey for introducing me to William Walton’s “One Act Extravaganza” The Bear a few years ago.

This Friday evening, I witnessed the second episode in this miniseries, Strauss’  Die Ägyptische Helena, in a concert performance at Jordan Hall. It was a beautifully executed production of a flawed opera.

One of Strauss and Hofmannsthal’s lesser collaborations, the opera deals with Helen’s return to her husband Menelaus after her rescue from the arms of Paris. Menelaus, unable to accept his wife back after her infidelity, is convinced by the sorceress Aithra (who takes pity on Helen) that the “Helen” who eloped with Paris was in fact an imposter.

In the opera’s second act, Menelaus, haunted by the specter of Helen’s abduction by Paris, slays Da-ud, the visiting son of mountain prince Altair (who he misidentifies as his nemesis Paris risen from the dead) during a morning hunt. The opera ends, unsurprisingly, with Menelaus drinking a potion that restores his memory, clearing the way for a rapturous reconciliation.

In Helena’s own day (1928), it was interpreted as a classical allegory for the uneasy peace that followed the Great War. Today, it feels unmoored, bizarre, almost psychedelic.

Helena is a masterful exhibition of late Strauss’s orchestrational skill, tempering the brash, unforgiving sound of Elektra with a nautical, low brass warmth (it is easy to see some of these textures and voicings reflected in both later nautical operas like Britten’s Peter Grimes and Stravinsky’s neoclassical Oedipus Rex).

Strauss relies even more heavily than in some of the earlier operas on variation in timbre as a compositional device, meaning that the audience is treated to a succession of interesting doublings and orchestrational tableaus, but also that the orchestra (which sat over 100 people) frequently upstaged the singers in both interest and volume. (I don’t intend that as a commentary on Odyssey’s performance of Helena, but rather the opera itself, which was, musically speaking, clearly more comfortable in the concert hall than the orchestra pit).

But even while the centrality of orchestration made it a natural fit for the concert hall, its nonsensical plot, implicit violence, physical transformations, and heavy-handed allegory meant that a concert version made little sense dramatically. This dissonance between the opera’s dramatic and musical needs was keenly felt during Friday night’s show.

The star of the performance was tenor Clay Hilley in his Odyssey Opera debut as Menelaus. Hilley demonstrated an impressive dynamic range, singing with ample warmth in the upper range and easily-projecting intimacy in softer moments. His tone blossomed into Strauss’ rich French horn and cello doublings, equally at home in both the aggressive, consonant-heavy, concitato stylings of Strauss’ moments of rage and in the reconciliation of the closing.

His only musical weakness appeared at times with sustained low tones, which could wear somewhat thin. Dramatically he wore each layer of his character’s advancing jealousy and madness on his face, and did everything humanly possible to convey dramatic intent, even successfully engaging in a witty repartee with the chorus late in the first act.

Sitting in the balcony as Hilley implored divine intervention, I felt that I was the object of his entreaties (to which I can at least offer a deferred answer with this paragraph of praise).

In the role of his long-lost wife Helena, Kirsten Chambers proved a worthy collaborator. She displayed a full sound which worked especially well with Strauss’ more intimate orchestrations—particularly string or flute doublings.

Chambers rose to the occasion in many of Strauss’ most rhapsodic moments—for example, when she recalls Menelaus’ rescue of her near the beginning of the first act, or reunites with a reawakened Menelaus at the end of the second. There were, however, moments of fuller orchestration when I could see her lips moving but hear no sound.

As an actress, she did not rise quite to the level of overacting necessary for performing such a dramatically rich work in concert, and even the acting she did do sometimes felt slightly off. As Menelaus was doubting her fidelity and generally lurching off the rails in the first act, her smirking facial expression was oddly disquieting.

In the role of the sorceress Aithra, soprano Katrina Galka’s voice also worked well with some of Strauss’ doublings—particularly clarinet—but at other times could be smallish and non-variable, with an omnipresent reedy vibrato.

Mezzo-soprano Joyce Castle in the role of the “Omniscient Sea Shell” (yes, this opera has a part for a singing seashell) offered a rich, portentous tone in limited airtime. Smaller roles offered two standouts—Won Whi Choi in the role of Da-ud, and Sara Duchovnay as the First Servant.

Tenor Choi, who appears only briefly in the second act, displayed a winning warmth, and Duchovnay a buttery, supple sound, offering an inviting counterpoint to Galka’s less forgiving tone.

The imagined action onstage took place in front of a glorious orchestral backdrop curated by Rose and his heroic band of over 100 Boston freelance players. Rose’s outstanding attention to detail showed every time Strauss peeled back thicker orchestrations to reveal intricate string figuration underneath.

Soloists in the woodwind section infused musicality into their doublings with the singers, and clearly viewed their role as that of a coequal partner with the vocalists. Strauss’ Elektra-referencing brass grotesquerie, particularly around the slaying of Da-ud, was performed with bracing clarity and just the perfect amount of harshness (though they, and several of Strauss’ other tuttis, were probably a little too large for the confines of Jordan Hall).

The same enthusiasm for small details was also evident in Mariah Wilson’s chorus, whose band of elves tormenting Menelaus in the first act provided a welcome dose of comic relief.

Die Ägyptische Helena exhibited many of the traits that make Odyssey Opera a cultural treasure in Boston: it introduced audiences to a neglected (if mostly justifiably) piece from the repertoire, and it squeezed just about the greatest possible amount of musical mileage out of this often overlooked work.

I’m still not quite convinced that a concert performance fits this opera, but then again I’m not entirely sure that it would fit onstage either. Perhaps that’s why we don’t see Helena very often.

I am, however, delighted that Odyssey afforded me a weekend of puzzling over these questions. For enriching the musical lives and repertoires of both seasoned opera lovers and audiences new to the genre, it might be the fearless experimenters like Odyssey who most deserve our support. I will, without a doubt, be back for Offenbach’s take on Helen in June.