Touch me in the mourning

“How far should we give way to grief? How far dare we, without disaster?” 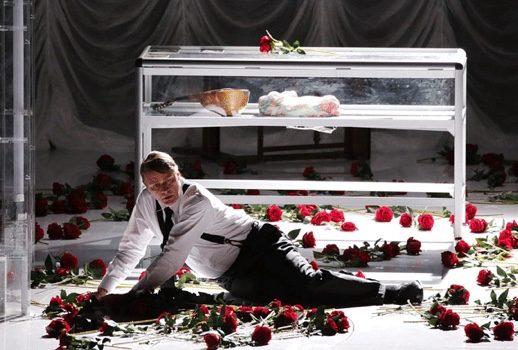 “How far should we give way to grief? How far dare we, without disaster?” Such heavy, contemplative words were uttered wisely by the main character of Erich Wolfgang Korngold’s youthful Die tote Stadt. The opera opened at Teatro alla Scala Milan for the first time in a glamorous production by English director Graham Vick on Tuesday, May 28.

Austrian-born, American composer Korngold lived an interesting, if rather unpredictable, life. A child prodigy that garnered praises from the likes of Gustav Mahler and Giacomo Puccini, he went on to become one of the most influential film score writers (some said as one of the film music founders) in Hollywood, mostly notably for his scores for Errol Flynn’s movies The Adventures of Robin Hood and The Sea Hawk, among others.

Die Tote Stadt (The Dead City), written when Korngold was 23 years old, was based on the 1892 novel Bruges-la-Morte by Belgian symbolist poet Georges Rodenbach. Korngold and his father, Julius Korngold, co-wrote the libretto themselves under the pseudonym Paul Schott and they changed the plot of the Rodenbach’s novel by having the murder happening in a dream instead.

The score was unabashedly Romantic, filled with gorgeous dreamy melody, and the central theme of overcoming grief of a loved one proved to be popular with the 1920s audience. Subsequently, the opera was banned during Nazi regime (and Korngold moved to the US), and it languished in obscurity till recent times.

In three acts, the story revolved around Paul, a widower that still was grieving for her loss. He met a dancer, Marietta, that exactly resembled his wife (Marie), and invited her to home. Unable to make any connection, she got bored and left; and he fell into hallucination.

In his lengthy “dream” space (the whole Act 2 and half of Act 3), Paul succumbed to the temptation and hooked up with Marietta. Subsequently, they got into a quarrel over his obsessions to Marie. Marietta mocked her, and Paul straggled her with Marie’s hair. Paul got out of the “dream” and found there was no corpse.

In fact, Marietta came back to retrieve her umbrella that she left behind. The opera ended with Paul’s leaving the house, symbolizing he was ready to move on with his life. The Dead City in the title referred to Bruges (Belgium), where Paul’s house was located.

In his libretto, Korngold put a number of specific stage cues and even specific props to bring his intention across; sometimes it was even spelled out in the texts as well (“liquid gold” tresses of Marie’s hair, for example).

Director Vick, in mounting Die Tote Stadt for the first time, seemed to pay homage more to Hollywood movies (perhaps to highlight that phase of Korngold’s extraordinary life) rather than following blindly to such directional guides. However, he was observant of those, and he did follow most of the key ones.

There were many aspects of cinematic and aesthetic qualities into this production, particularly in Stuart Nunn’s sets, props and costumes. This resulted in a staging that had very different feel from others that I saw, either live or recorded.

Korngold set the opera to be around the end of 19th century, though Vick’s vision wasn’t very specific on the timing. After a brief Prelude, the curtain opened to reveal a bright, somewhat modern room that was bathed in white. On the back there was large curved white curtain (resembling 1940’s movie curtains) extending from either side of the stage, essentiality cutting the stage in half.

The “Temple of Memories”, where Paul stored her deceased wife’s keepsakes manifested into a glass cabinet, consisting of three items: a lute, an antique scarf and the aforementioned Marie’s hair – all of which were referred in the texts. White roses were placed all over the stage. A small turntable was place on the left, and a glass square was placed on that to represent the window. 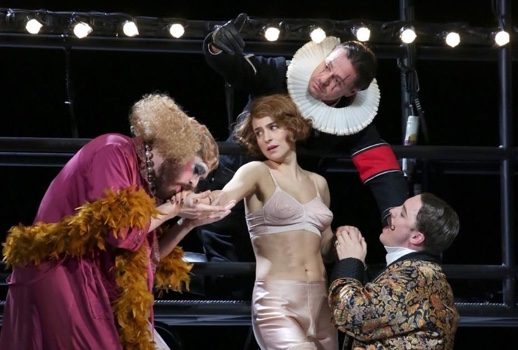 The only oddity here was Marie’s picture stored in a flat-screen TV (and they did show it was being turn on/off to show her picture). The chaotic jumble of style gave an other-worldly and sterile feeling, and this was Paul’s home, “old and ghostlike” as his housekeeper Brigitta sang.

The arrival of Marietta brought colors into the picture. First, red roses, “glowing as red as fire”, replaced all the white roses on stage; then Marietta appeared in bright summer flowery dress and a hat adorned with a flower, running around “full of life and fond of pleasure”. It was such a delightful effect, not unlike the arrival of Dorothy in Munchkinland in The Wizard of Oz.

Vick staged the scene where Marietta’s troupe (Gaston, Lucienne and Juliette) calling her for rehearsal from a box on the left of the stage and this time, it recalled a scene from Baz Luhrmann’s Moulin Rouge!

Furthermore, during the orchestral passage at the end of Act 1, the white curtain lifted up and from behind an almost-naked Marietta danced and marched forward. Adorned with shimmering headpiece and armed with a bevy of equally scantily-clad dancers, the scene closely resembled the appearance of Satine during the “Sad Hindi Diamonds” sequence from that same movie!

The splendor of Vick’s vision was only fully unleashed during the lengthy dream sequence. After the break, the curtain opened to Paul’s laying on the floor in a bed of red roses, obviously a nod to that famous scene from American Beauty. The glass square now represented Marietta’s door, where Paul hid behind it while spying on her.

In this setting, and throughout Act 2, the white curtain gave way to headlights coming down from the ceiling, once again reminiscence of Hollywood, and, in a way, to force the audience to pay attention to what would happen next.

Rather than the customary scene at the dock with boats, Vick transported the audience into the decadent German during Weimar Republic, a la Bob Fosse’s Cabaret, for the subsequent party with Marietta’s troupe.

The stage was filled with artists, dancers, soldiers, prostitutes, even drag queens. A raised platform appeared with more spotlights, and Marietta’s friends used that as a mini-stage to perform.

Vick’s creative apex reached its zenith with the presentation of the famous “Pierrot Tanzlied” (“Mein Sehnen, mein Wähnen”), sung by Fritz the Pierrot in SS attire with ruffs! To me personally this was an extremely poignant moment and a powerful statement by Vick.

The sad clown Pierrot, usually heartbroken as Columbine chose Harlequin most of the time, had long been a symbol for struggling artists, particularly in nineteenth and twentieth centuries. By doing this, and especially coupled with the words of the song, Vick simply identified Korngold himself in him (Pierrot), without having the need to mess with the production!

More powerful images were shown during that Paul’s nightmare; soldiers dancing with the prostitutes, soldiers marching prisoners in striped shirts, Nazi Youth blending into a boys’ choir during the procession in Act 3. Although those images placed in the background, they become a compelling reflection of our times, a reminder of the opera’s painful past and the need to not let that happen ever again.

The staging simply reverted back to the beginning after Paul got up from his nightmare, complete with the white curtain. I particularly loved the simplicity of the final moment; the white curtain simply just lifted up, and Paul walked out into the dark, getting on with his life.

Obviously, such an intriguing concept was just half of the equation; it still needed able hands to execute it to perfection. Teatro alla Scala assembled a cast of the highest calibers for these first performances, and it definitely showed on opening night.

German tenor Klaus Florian Vogt has been singing Paul for more than a decade (his 2010 performance with Camilla Nylund from Finnish Opera was released on DVD), and I think the role was ideal for him, as his bright timber and impressive legato were well suited for it.

I was taken aback at first at how lyrical he sounded in Act 1, as heard from the back of my (upper) box. It was more like a Mozartian rather than a Wagnerian tenor, although he still could be heard over the orchestra easily. I think it was more of stylistic (or directorial) choice, as he did sound more like his usual self during the dream sequences, and he reverted back to lyrical voice after he got out of it.

He characterized Paul as someone whose grief overly detached him from the world, and all his mannerisms were timid and indecisive. It was a riveting performance marked with beautiful pianissimi.

Vogt had an equal partner in the Lithuanian soprano Asmik Grigorian. An extremely attractive woman with powerful steely voice and lithe stature, Grigorian moved with the gracefulness of a dancer, making her perfect as Marie.

This is a very tricky role in my opinion, not only because of the requirements of the role, but also because she underwent multiple transitional moods in each act; from cheerful (Act 1) to seductive (Act 2) and disappointed and angry (Act 3).

A true stage animal, Grigorian performed each with unfading intensity. Her voice sounded huge and gorgeous, particularly in the heartbreaking Marietta’s Lute Song “Glück das mir verblieb” that could be heard in the trailer above.

The two of them were wonderfully supported by the Frank/Fritz of Markus Werba, whose booming voice imbued each role with specific characteristic; a concerned Frank and an amorous and suave Fritz. He delivered the aforementioned Pierrot Tanzlied with sensitivity and careful phrasing, making it truly the hightlight (next to the Lute Song).

Cristina Damian completed the picture as an observant, if rather small-scale, Brigitta. All the other comparimario roles were all handled efficiently by mostly students of the Teatro alla Scala Academy.

Conductor Alan Gilbert proved to be one of the greatest assets of this performance. Well-known for his advocacy for contemporary works, Gilbert led Teatro alla Scala Chorus and Orchestra in a clear and confident reading. He never shied away from highlighting the “film music” aspect of the score nor from milking the big moments while still supporting the singers.

It was a night where everything fell into place, making it truly unforgettable. As it was my first time at La Scala, I was kinda hoping to see the famous La Scala “reception”. However, with a performance this good, I guess nobody in the audience felt the need to find faults with it, and they cheered enthusiastically everyone on stage, including the production team.