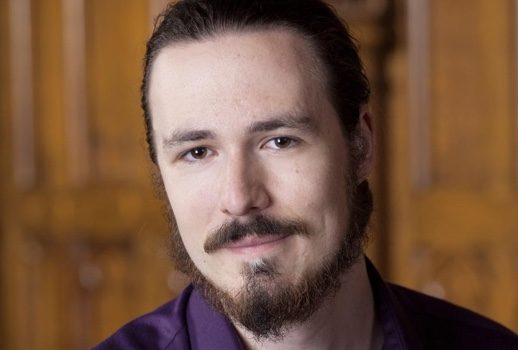 Bass Daniel Fridley, who offered “plenty of spin and sparkle in his voice, perfect diction, and the exact resonance and gravitas I look for in a bass.”

Teatro Nuovo put on a perfectly delightful show on Thursday night including the New York premiere of Donizetti’s Symphony in E minor and Rossini’s Stabat Mater in the Church of the Heavenly Rest.

The Donizetti was charming, if not particularly brilliant. The composer was in the midst of expanding of his string quartets to become a Romantic symphony, when necessity struck: Linda di Chamounix needed an overture, fast, so Donizetti borrowed the first movement of his nascent symphony and then left the remainder unfinished.

Will Crutchfield, who conducted this part of the program, was responsible for orchestrating the fourth movement where Donizetti left off. His orchestration was fairly convincing, retaining Donizetti’s style and perhaps adding a bit of flair in the percussion. The orchestra played well under Crutchfield, but they never fully came together; the brass players struggled with their period instruments, and everyone felt a bit out of sync.

Crutchfield noted that generally Teatro Nuovo performs without a conductor, citing the often-improvisatory style that characterized bel canto orchestras., so perhaps everyone was out of their comfort zones here, Donizetti included. I don’t particularly think of Donizetti as a master of orchestration, and this piece just made me wish for an aria. The finest moments came in the second movement, with a plaintive, hymn-like motive that traded between instruments and a few of the only unexpected cadences in the piece.

But, what we were all really there for was Rossini’s camp classic, the Stabat Mater. This is a personal favorite of mine, and Teatro Nuovo didn’t not disappoint. Jakob Lehmann’s conducting infused the orchestra with the necessary energy and a rhythmic specificity that I missed in the first half, and everyone suddenly looked like they were having a lot more fun.

This piece is high drama, and Rossini pulls out a lot of stylistic stops to express the blood-and-guts text, which follows the Virgin Mary as she watches her son be crucified. There are fugal bits, a recitative for bass and chorus that invokes chant while retaining Rossini’s Romantic style, and the gem of the show, the “Inflammatus et accensus” for soprano and chorus, an absolute barn-burner about that invokes Mary to save us on the Day of Judgement.

The performance was only slightly interrupted by the uns-uns-uns of EDM from the outdoor pride party next door, which featured a drag show. I wished desperately for some kind of cross-over experience with drag queens lip-synching to Rossini featuring lots of death drops during all the cabalettas. Someone get on this immediately for Pride Month 2020.

The soloists were pulled from the Teatro Nuovo ensemble and changed for each movement, a practice I appreciate as it allows for more than just four voices to be heard, but does make it difficult to review, as I’m looking at over twenty names for a piece that clocks in at under an hour. Overall, this was very fine singing across the board, so any complaints I have are more nitpicks than legitimate grievances.

With that in mind, I’ll highlight a few of my favorite voices. Bearded bass-baritone Erik van Heyningen had a fantastic, easy, taffy-pull of a voice, with an utterly placid expression that belied the difficulty of his aria the ‘Pro peccatis suae gentis.” He made this look very easy, and navigated the shifts in register beautifully.

Daniel Fridley had a shockingly excellent voice, skyrocketing him to the MVP spot for me. His movement was perhaps the most difficult of the piece. The “Eja mater, fons amoris,” is a cappella and has an extremely wide range, requiring excellent intonation and the ability to cut over the choir, He had plenty of spin and sparkle in his voice, perfect diction, and the exact resonance and gravitas I look for in a bass.

His voice has a wide palette of colors to play with, and Fridley exploited this to great dramatic effect, all with an edge of danger that I rarely hear and always wish for. At times, Fridley’s voice sounded almost as if it would careen out of control, but it never went over the line. This was exciting singing in my favorite way.

And finally, The moment I was waiting for,  the “Inflammatus et accensus.” Soprano Sarah Vautour, who clearly knew she’d gotten the prime aria, came dressed to kill in an asymmetrical cloud of blue tulle over a pointed sweetheart neckline. I would very much like to own that dress, so Ms. Vautour, if you’re reading this, please tell me where I can find it.

Her voice was a little light for the aria, but her sound was appropriately mysterious and intense, with an urgency behind it that never got in the way of beautiful, lyrical singing. The orchestra ran away with itself in this movement (who can blame them?) and occasionally they covered Vautour a bit, but to be honest I was too busy rocking out to worry.

Like the at end of the Verdi Requiem, a solid high C over the whole choir and orchestra is the true test of whether you’ll be spared on the Day of Eternal Judgement, and I think Ms. Vautour would have been sent to the good place for hers.

Honorable mentions include: soprano Meagan Sill, whose voice had the most cut and sparkle of all the women while never veering into shrill territory, bass-baritone Dorian McCall who brought the perfect amount of plaintive warmth to the opening quartet, and mezzo Maya Gour, who had expressive, impressive low notes,as did Allison Gish.