From Russia with love

Under any circumstances, the Russian Opera Workshop’s radiant concert performance of Tchaikovsky’s Iolanta would have been an event to celebrate. 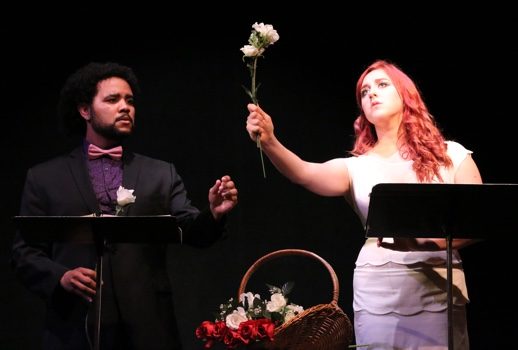 Under any circumstances, the Russian Opera Workshop’s radiant concert performance of Tchaikovsky’s Iolanta would have been an event to celebrate. But coming at the conclusion of an intensive summer program of study, where more than 20 very promising young singers gained a new level of expertise and performance savvy—well, that makes it all the more special.

For more than three weeks, the group studied Russian language and repertoire with program director Ghenady Meirson, and participated in master classes with classical music major-leaguers like Benita Valente and Angela Meade. I saw one of the three public performances of Iolanta, which were presented with multiple casts, and in addition, attended several of the open master classes, and a capstone concert of Russian Romances that featured the entire cohort.

Each evening provided memorable moments. One such took place in Valente’s session, when Piero Regis, a very appealing lyric tenor, had a palpable breakthrough, finding the lightness and tonal spin that turned his good performance of “Vainement, ma bien-aimée” from Le Roi d’Ys into a special one. The master classes revealed some other exceptional talents, including mezzo Randa Melhem, who brought a rare sense of grandeur and sweep to “Voce di donna” from La Gioconda, particularly for a student.

I’m assuming it was mere coincidence that the mezzo contingent was particularly strong in this group—in addition to Melhem, several others also made a positive impression. Guadalupe Aguirre struggled a bit with Octavian’s “Wie du warst”—she was stronger in the Werther letter scene—but both arias showed a distinctive instrument and a strong sense of stage temperament.

Ariel Andrew also worked on Werther (in her case, “Va! laisse couler mes larmes”). Although hers is still clearly a voice in development, she deployed a force-of-nature sound with ease.

Leah Bedenko was perhaps the most technically polished and poised singer in this group, lovely in Tchaikovsky’s “It was in the early spring,” and making her mark even in the small role of Laura in Iolanta. If I were an agent, I’d have my eye on her.

It’s a favorite piece of mine, at its best as beautiful, and certainly as moving, as anything Tchaikovsky wrote. Though its fairytale story is multigenerational—and its leading roles (soprano Iolanta, tenor Vaudémont) are challenging—it suits a group like this. Meirson himself provided piano accompaniment; inevitably, some of the lush musical texture was lost without a full orchestration, but more of the glory remained.

Especially since it was performed so well, pretty much across the board. A special pleasure was how strongly the group functioned as an ensemble—by no means a given under these circumstances (kudos here to Meirson, as well as two other pianists and coaches, Gabriel Rebolla and Ting Ting Wong, who participated throughout).

There was impressive supporting work from the aforementioned Bedenko, soprano Stephanie Rivero, and especially Rebecca Carden (another promising mezzo!), who sang the roles of Iolanta’s various handmaidens.

The male parts are probably more challenging, and Meirson brought in some more experienced singers to take them on, including Tim Renner, dramatically and vocally very striking as Robert, and Eric Delagrange as King René. (Both are resident artists at the Academy of Vocal Arts, where Meirson also teaches; the performance was held at AVA’s Helen Corning Warden Theater). T

he latter’s theater-filling bass-baritone is a real attention-grabber, but he sometimes pushed it too hard, losing quality at the top. The softer passages worked best

The two leads did exceptionally fine work. Samantha Long (Iolanta) has a vibrant soprano, full of color and shine—it’s a lyric tone with enough cutting edge to make a real impression in the spinto title role, and she was easily heard in the ensembles. Long is also theatrically engaging, clearly singing on the words. Early on, I wished for a somewhat smoother line in the higher-lying phrases, but she settled into the role and really hit her stride in the ravishing final scene.

Conversely, tenor Martin Luther Clark (a Curtis graduate student) as Vaudémont flagged ever so slightly as the evening wore on (understandable: he’d also sung the taxing role the night before, with the first cast), but it’s an exceptionally lovely voice with thrilling amplitude and a distinctive personal timbre that keeps its quality at dynamic extremes. He, too, has fine stage presence. If I were betting on a star of tomorrow, Clark would be high on my list.

But wait…there’s more! In July, Meirson and company launch a second session of the Russian Opera Workshop, with new participants and more masterclasses (this time including teachers Bryan Hymel and Sally Wolf), another Russian Romances concert, and TheMaid of Orleans. I’ll report back then.